Borodin
In the Steppes of Central Asia
Rachmaninov
Piano Concerto No.2 in C minor, Op.18
Dvořák
Symphony No.9 in E minor, Op.95 (From the New World) 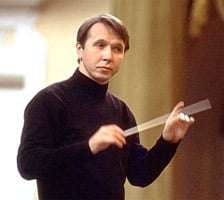 Mikhail Pletnev is an intriguing conductor. As soon as one forms a judgement about his performing style, he confounds it by doing something different. During In the Steppes of Central Asia, for instance, his podium style was so laid back that I was reminded of the description: “He may or may not have been holding a martini while conducting”. Despite the relaxed approach, Pletnev led an extremely fine performance of the Borodin, marvellously atmospheric at the start and close, and with a memorable projection of both the folk-like Russian melody and the ornamented oriental theme.

Born in Moscow in 1984 and now an Israeli citizen, Boris Giltburg joined Pletnev in performing an impassioned, volatile interpretation of Rachmaninov’s Second Piano Concerto. Pletnev, now more animated, drew a dark-hued and ardent response from the Philharmonia Orchestra. Of particular note was the horn solo at the end of the first movement, a breathtaking moment, and the clarinettist’s playing in the slow movement. The taken-fast allegros occasionally stretched Giltburg’s technique to the limit and his tone could be slightly glassy in the more lyrical sections, but overall his was a distinguished performance, notable for an avoidance of sentimentality.

Giltburg gave an encore of Rachmaninov’s arrangement of Fritz Kreisler’s Liebeslied. It was exquisite.

The ‘New World’ Symphony brought a significantly different style of conducting from Pletnev. So animated were his gestures now it seemed a distinct possibility that his baton might fly off and spear a musician. The results were mixed in the first movement. Although he inspired exciting playing, Pletnev’s extreme slowing for the lyrical passages and rapid accelerations into the allegro sections severely risked losing the sense of line. It worked, but only just.

Fortunately, the rest of the symphony was largely free of such tempo changes. The Largo was marked for the slow tempo that Pletnev adopted, sustained by a sublime cor anglais solo, hushed strings and beautifully blended brass. The scherzo was fast and fiery, balanced by affectionate playing in the trio, and the finale was energetic and powerful, the brass on particularly fine form.

Sadly, there were numerous audible distractions, including two women whispering for several minutes during the concerto, another woman snoring through the latter half of the symphony, and throughout a faint but noticeable high-pitched whistle from the lighting or speakers somewhere near the ceiling.