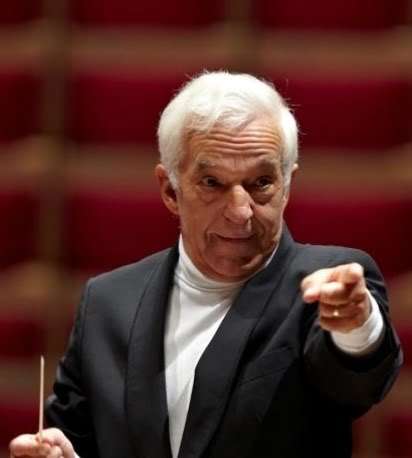 This Philharmonia Orchestra concert, halfway through its excellent Russia 1917 series, may well turn out to be the most fascinating piece of programming, although the music, with one short, loud exception, is the least overtly revolutionary. Alexander Mosolov (1900-73) is remembered in the decadent West mainly for his brutal explosion of industrial Soviet modernism The Iron Foundry (1926), all pounding rhythms (it was originally intended for a ballet), molten orchestration and a muscular, heroic tune delivered standing by the horn section, a hymn to the dignity of labouring for the glorious Revolution – you can imagine Putin doing his push-ups to it. The Philharmonia went for its mechanistic discipline with pulverising conviction, its grinding brass, woodwind shrieks and implacable percussion kept firmly in place by the eighty-year-old Vladimir Ashkenazy, Soviet propaganda at its loudest and proudest.

Prokofiev’s Piano Concerto No.3 is infinitely more ingratiating. The composer started it in 1917, just before he left Russia for nearly a decade. Its Russian premiere in 1925 was part of a process leading to his return to the Russian fold in 1936. Ashkenazy’s 1970s recording (with Previn conducting) is a classic, and his mastery of its idiom transfers flawlessly to his conducting of it. The twenty-eight-year-old Behzod Abduraimov left us in no doubt of his stupendous virtuosity. For those who have grown up with Ashkenazy and indeed Martha Argerich in this work, Abduraimov didn’t quite give us that hit of mercurial wit and daring in his impeccably organised account of the first movement, but thereafter he relaxed into Prokofiev’s irresistible blend of romance and irony in a spellbinding performance of the middle movement’s Variations, capped by a Finale of visceral brilliance, Ashkenazy egging on the Orchestra. Abduraimov’s encore, Schubert’s Moment musical in F-minor (from D780), was even more refined than I recall it from his Barbican Hall recital at the start of this year.

The second half of the concert was devoted to the music of Reinhold Glière (1875-1956), whose career was at the heart of Soviet music. His Concerto for Coloratura Soprano and Orchestra, despite the arch-conservatism of its style, is still oddly subversive, in that the singer’s vocalise obviously has some sort emotional agenda, especially in her dialogues with the orchestra, from which the listener feels partially excluded. Never mind, it is music that probably makes more sense heard but not seen. Nadezhda Gulitskaya (replacing Ailish Tynan) was magnificent in the doleful first movement (the work was written at the height of World War Two, in 1943) and she sculpted her voluptuous voice expertly to its instrumental identity. Then she went to town in the sunny second movement – nineteenth-century Italian coloratura in bleak, war-torn Stalinist USSR, ever-more escapist and weird – although I couldn’t help feeling that a duet with flute sounds as though Lucia di Lammermoor had really lost the plot. Gulitskaya’s technique and top notes were impressive and her regal presence swept all before her.

The Philharmonia was back to full strength for the Suite from Glière’s three-Act ballet score The Red Poppy (1927), a ripe piece of propaganda about a Soviet sailor in China who rescues a beautiful dancer from her brutal overlord and, yes, they fall in love. There is much sub-Turandot chinoiserie in the music, and it’s interesting that when things become serious and love-fixated it reverts to proud diatonicism, which is one in the eye for vapid oriental pentatonicism. There is much barbarous Polovtsian Dance-type bravado, a sumptuous violin solo, a decadent waltz, and the well-known ‘Russian Sailors Dance’, all hyper-colourful and just slightly too long. Ashkenazy fired up the Philharmonia to give of its cinematic, gorgeous best at full throttle and with considerable panache. As the programme-note suggested, this sort of music was denounced by the USSR as bourgeois.