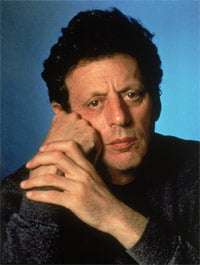 This sold-out concert was billed as “An Evening of Chamber Music”. We were offered something likeninety minutes’ worth of solos, duets and trios from Philip Glass’s vast output – most of which were transcriptions from music intended forlarger forces and which differed, to an extent, from the programme aspublished.

The first two piano etudes opened the evening, elegantly and thoughtfullyplayed by the composer. Some fallibility of execution in the secondpiece was uncharacteristic of performances that were otherwise polishedand convincing.

The most substantial work on the programme followed – Songs andPoems for unaccompanied cello, lasting the best part of half-an-hour. Moreaccurately described by the composer in his spoken introduction as a“suite”, it falls into three sections and contains a degree of varietywhich might appear surprising to Glass’s detractors. The cello sang with wide-ranging melodic lines and passages conveying nolittle expression and, at times, poignancy. The ‘songs and poems’ whichinspired the piece – if indeed they exist – were not identified, but onecouldn’t help wonder if there was an extra-musical idea behind it. This is music far removed from the relentless repetitions that characterise many a Glass score. 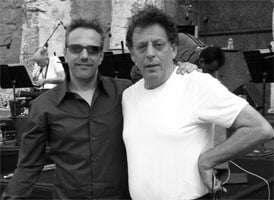 Mick Rossi on hand-drums then performed a duet with Glass in the rhythmically playful Etude 10; we then heard some excerpts from the score to “Naqoyqatsi” – the concluding film in the trilogy directed by Godfrey Reggio. Thesewere four of the so-called “tissues” – literally connecting material – originally featuring Yo-Yo Ma playing on the soundtrack. Wendy Sutterwas no mere substitute; she played the sometimes cruelly high writingwith total conviction and commitment. The second piece also featuredRossi, now on celesta, and the resultant sonority, with the cello playingin unison, was quite striking.

A ‘furioso’ segment from “Secret Agent” for cello and piano (the latter played hereby Rossi) made for an interesting contrast with the more contemplativemusic for the play “The Screens”, with its reflections on French lifeand which features piano-writing of Satie-like simplicity and some long-breathed melodies, the overall effect of which was immensely touching.

Thus concluded the ‘official’ programme. Three encores were granted: apiano duet version of ‘chase’ from the opera “Orphée”, Glass playing’opening’ from Glassworks, and cello and celesta again in an excerptfrom “Book of Longing” – Glass’s collaboration with Leonard Cohen.

If rather short in duration to be realistically described as ‘anevening’, this programme (which ran without an interval) neverthelessfelt just right in terms of diversity; though one suspects thatwithout such dedicated performers the music would not engage andcaptivate an audience as it undoubtedly did on this occasion.