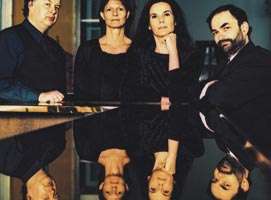 Due to its extensive discography, Quatuor Mosaïques has for some time been the leading period-instrument string quartet. As with many such groups, its repertoire extends beyond the Classical period. There are plans for the quartet to essay the likes of Berg, which should be interesting.

The Bach did not make an auspicious start to this concert. Rarely have I heard the composer’s music delivered in such a smooth, uncommitted way. The dynamic range was limited, there was little sense of direction or logic – the players looked and sounded uninterested.

Although the Mendelssohn was the launched at speed and with attack, things soon degenerated. Again, the dynamic range was restricted. The second violin and viola plodded through the music, and seemed to be merely a bed of sound, over which the cello and, more particularly, the leader, wove slightly more interesting patterns. The latter’s dominance was also excessive in the scherzo, which was devoid of any sense of swing. In the slow movement the tempo was too fast, the volume too loud and the emotional surface was skated over. Worse was to follow in the finale, which became little more than a concerto for the first violin.

Beethoven’s Opus 130 is one of the supreme musical masterpieces and I have not heard a worse performance of it. The brief introduction was shapeless, in the Allegro the complex conversation between the instruments was almost non-existent with the second violin and viola were reduced to cyphers. The second moment was better, with feather-light attack and articulation, but the Andante flowed by with no expressive pauses and no sense of dialogue. Much the same could be said of the lifeless ‘Alla danza tedesca’.

The ‘Cavatina’ is one of the most beautiful, soul-searching movement ever written. Quatuor Mosaiques was too fast and totally devoid of humanity or spirituality. For most performers the Grosse Fuge (the work’s original finale) is an epic struggle and, finally, a life-affirming journey. But, these players suggested nothing of any consequence. I felt angry that such a masterwork should have been reduced to such triviality.