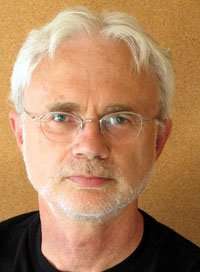 For his 60th-birthday concert, one of many one imagines, John Adams conducted an interesting programme of works composed in the past half-century.

Colin Matthews’s Reflected Images was commissioned by the San Francisco Symphony and premiered under Michael Tilson Thomas in 2003. An impressive work for large orchestra, its 13-minute span is divided into four distinctive sections of roughly equal length. The first (‘Distant Waltz’) has a somewhat Bergian feel, the second (‘Past March’) presents ominous, stalking ostinatos in the percussion, the third (‘Present Recitative’) features a searching passage for strings, and the lively finale (‘Future Movement’) ends with a discordant, Ivesian climax for brass. The performance under Adams was dedicated and convincing. This is the sort of composition – concise, characterful and communicative – that deserves to be heard more often.

Britten’s Symphony for Cello and Orchestra, composed in 1963 for Rostropovich, is one of his most searching and technically demanding works. Alban Gerhardt – playing from memory – met those challenges head on, especially in a spellbinding performance of the cadenza. Unfortunately, Adams’s direction failed to bring a comparable level of tension to the performance as a whole. The opening Allegro maestoso lacked both drama and mystery, and the sense of struggle inherent in the weary tread of the Adagio was underplayed. Some superb playing from the first trumpet at the beginning of the finale brought an emotional engagement that had been previously missing, but this was not sustained and the triumphant ending of the work was an anticlimax.

No such problems afflicted “Choruses from The Death of Klinghoffer”, a sequence of six choral commentaries taken from John Adams’s 1991 opera. There are those who find Adams’s music repetitive and uninteresting, and the opening of the first piece, ‘Chorus of the Exiled Palestinians’, with its banal melodic refrain, did little to dispel such criticism. However, subsequent choruses demonstrated greater degree of imagination and effectiveness. The second piece, ‘Chorus of Exiled Jews’, featured beautiful sustained strings and a moving horn melody, while the fourth, ‘Ocean Chorus’, with its reminiscences of Vaughan Williams’s “A Sea Symphony”, captured a haunting sense of the infinite. The fast, driving rhythms of the final ‘Night Chorus’ managed to generate a considerable emotional thrust despite (or perhaps even because of) the repetitiveness of the melodic material.

The choruses do not present anything new or original in terms of Adams’s output. However, the commitment of the orchestra under the composer’s direction and the sheer enthusiasm of the BBC Symphony Chorus – the singers’ sheet-music bouncing up and down in unison with their singing – made for an enjoyable conclusion to the concert.