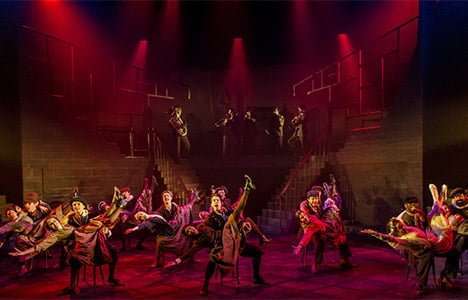 Quite why Rags, which opened on Broadway in 1986, is part of that long list of legendary Broadway failures (just four performances after twelve previews) has never been satisfactorily explained. It had an opera-singer lead (Teresa Stratas, much associated with New York’s Met, and the first Lulu in Friedrich Cerha’s completion of Berg’s final work, staged in 1979), a libretto by Joseph Stein, who had earlier triumphed with a show on a similar subject, Fiddler on the Roof (Stein initially conceived Rags as a direct sequel to that show), lyrics by Steven Schwartz (Godspell) and music by Charles Strouse (Bye Bye Birdie, and Annie). Strouse recently described the lyrics as “still Stephen’s very best work”, and its tryout engagement in Boston received excellent reviews, though it was suggested that the book needed tightening as audiences had trouble identifying the dozen or more principal characters. The original director, Joan Macklin Silver, who had been hired because she had made a film, Hester Street, also about Russian immigrants on the East Side, had been fired, and Strouse and Schwartz found themselves directing the show for several weeks before Gene Saks took over. “He cleaned up the loose ends of the plot”, said Strouse, “but in cutting down and explaining things, he took away some of the show’s charm and musical substance.”

The production brilliantly directed by Martin Connor for the Guildhall School of Music and Drama is a triumph that must surely be close to what the original creators were striving for, a moving, occasionally hilarious, portrait of life in the crowded sections of New York to which Russian immigrants were fleeing in 1910. It begins with the hopeful passengers on board a ship approaching Ellis Island. Led by the show’s central character Rebecca Hershkowitz (Lois Meleri-Jones in fine acting and singing form), who has come with her small son to find the husband who emigrated some years earlier, the ensemble sing four songs depicting the land they have left behind, the one they are coming to, and their aspirations. Beautifully sung and played, it provides a powerful start, and is followed by the guards’ contemptuous ‘Greenhorns’, which not only projects their attitudes but also gives us one of several catchy ragtime melodies. 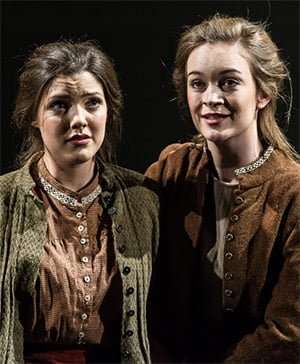 Strouse later stated, “The evolving music of those times particularly suited my ambitions as a composer. In the early 1900s music was bubbling in the streets, in brothels, in bar-rooms and at bar mitzvahs. Irish clog-dancing met black rhythms and suddenly tap dancing was there.” It clearly inspired Strouse, who wrote his richest and most tuneful score. The haunting ‘Blame it on the summer night’, Rebecca’s ballad when she finds herself falling in love with labour organiser Saul (quietly persuasive Maximilien Seweryn), deserves to be much better known, as do ‘Children of the wind’, ‘Easy for you’, and ‘We may never meet again’. The foot-tapping numbers include ‘Yankee boy’, ‘Cherry Street Café’ and the title song. The enchanting duet for a widow and the widower she hopes to win, ‘Three sunny rooms’, is beautifully delivered by Melanie Heslop and Christopher Currie, who make it a showstopper. Other highlights are two magnificent dance numbers exuberantly choreographed by Bill Deamer. They should go on longer!

The first takes place after Saul, instilling upon Rebecca the importance of education, takes her to see a Jewish version of Hamlet, staged by Connor as a comic highlight. When told that Hamlet has an Oedipus complex, the riposte is “Oedipus Schmoedipus, what does it matter as long as he loves his mother?”. The show’s other main characters include Rebecca’s husband Nathan, an ambitious strike breaker (convincingly wily James Mack) her close friend Bella (sweetly sympathetic Grace Andrews), and Ben, the young man in love with Bella and finding success as a vendor of gramophones (ardent Ryan Van Champion). Rebecca herself earns money to survive with her son by working in a sweatshop, the scene of a later tragedy. (The programme-book includes a photograph of the one destroyed by fire in Bangladesh at the end of April, indicating that some things never change.) David, Rebecca’s son, seems to have presented a casting problem, for he is played by a remarkably tall young man, which is jarring, particularly when he and his father duet ‘Yankee boy’ and David is taller.

The imaginative set design is by Susannah Henry, who has the locations seamlessly changing from ship’s-hold to streets, apartments, sweatshops, cafes and a theatre, all against a backdrop of skyscrapers blackly outlined against a red sky. The orchestra is splendid, lyrically sweet for the ballads and attacking the rhythm-numbers with style. Richard Howell’s lighting is central to creating mood. Rags is a powerful, moving and constantly engaging show with a gorgeous score. Guildhall School of Music and the creative team are to be congratulated for giving us the chance to experience its pleasures.