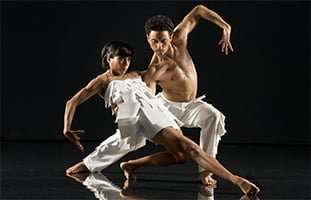 Rambert’s new programme for Sadler’s Wells is a fine thing: a full and satisfying evening. Praise, too, for Paul Hoskins and the musical ensemble who played so extraordinarily well: the Siegfried Idyll and Baermann’s Adagio for Clarinet and Strings in Roses were played with uncommon sensitivity – the horns in the former and the clarinet soloist Ian Scott in the latter were notably good. The musicians doughtily and jauntily engaged with the varied demands of Michael Daugherty’s composition in Labyrinth of Love (the work received its London premiere yesterday), which opened the evening and would have been even more successful had it be shorn of about fifteen minutes – succinctness is not an attribute common to the majority of modern composers and choreographers and it is to be prized. That said, Daugherty has come up with as broad a sound palette as one could imagine for what is billed as a trawl through love poetry of the past 2,000 years – syncopated rhythm, high romanticism, percussive beat and popular melody all tumble one after the other for Marguerite Donlon’s choreography, which also features a high soprano soloist (Sarah Gabriel) who moves about interacting with the dancers (very much like the singer in Michael Corder’s L’Invitation au Voyage) and generally having a high old time of it, singing, alas mostly unintelligibly one presumes about love, although I did catch the one about Richard and Liz (Burton and Taylor). 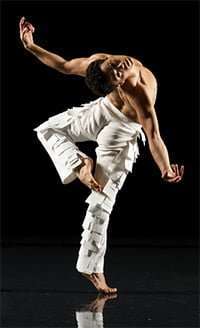 Scenically Labyrinth of Love impresses – Matt Collishaw’s video imagery on the back screen and on the fascia of the raised plinth running along the back of the stage is superb, images of the four elements beautifully created. The flames of one section were particularly impressive. And performing it all, Rambert’s most excellent dancers. It is a troupe brimming with talent, and Mark Baldwin, the company’s director, has clearly cast his net internationally as well as domestically to land the best talent. Donlon’s movement palette is many-hued: she favours grappling pas de deux very much in the style of Wayne McGregor and is a dab hand at comedy – the men in particular get amusing and inventive synchronised moves as well as having a go at slapping their own bodies to create percussive rhythm. There crept in the feeling that there was simply too much, too many elements which failed to coalesce into something coherent and therefore satisfying. 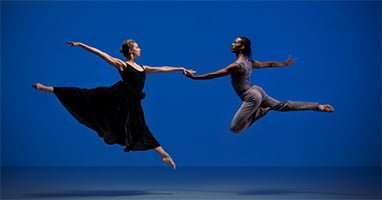 Paul Taylor’s Roses is a gentle, elegiac work to Wagner and Baermann. The greater part of this serene work is for five couples (clad in black dresses and grey trousers and tops) who dance together, form a sculptural landscape as one couple breaks away to dance and then return to the communal fold. It is movement with no meaning except its own simple beauty and possesses the delicate perfume of recollection and memory. When their dances to the Siegfried Idyll are over, a white-clad couple enter to execute an Apollonian pas de deux of ravishing beauty, Angela Towler as cool as the morning dew. It is a paean to simplicity in dance, a rare commodity indeed, and all-the-more powerful and eye-catching as a result.

Dutiful Ducks is a short quirky solo for a man by Richard Alston, who created it to a text sound piece of the same name in which the detailed rhythms and the inflections of the human speaking voice are interpreted by the dancer. Dane Hurst was the impressive soloist.

Finally, Merce Cunningham in full-blown 1970s’ mode in Sounddance. There is a lot of West Coast guff in the programme from a breathless devotee about it functioning on macrocosmic and microcosmic levels, the birth of the universe or the division of cells. What it is is a period exploration of movement for the sake of movement, and even if there seems to be central ‘character’ (Cunningham himself initially performed the role) who starts and ends the piece (the wonderful Miguel Altunaga, who possesses beautiful feet in entrechat), it cannot go further than that. Emerging through a heavily folded and draped hanging cloth, the dancers – clad in ‘70s baby-blue tights and mustard tops – engage in disparate movement, the combinations forever changing, the rhythm of the dance ever shifting. There are moments of vigour when they all move together, which then dissipates as individuals, pairs, trios break away and ‘do their own thing’. Sculptural groupings pause at times, gently rippling like corn in the breeze, or the whole ensemble invert themselves, their crooked legs forming geometric patterns; it possesses its own internal logic and beauty. It is performed to David Tudor’s electronic score which sounds like an afternoon in a panicked bird-house, or perhaps the depths of the Amazonian jungle, as sounds flap and whir and buzz around our heads (the Sadler’s Wells ‘surroundsound’ equipment fully used). At moments one hears a balloon being rubbed, at others the pounding of machinery; all very of its time and all, in Cunningham’s inimitable style, totally unrelated to what is happening on stage. Bizarre? Yes. Enjoyable? Mostly. But an unqualified hurrah for the spirited dancers who gobble up greedily this work from one of the titans of twentieth century dance.