Is there a finer concert-hall than the Concertgebouw in Amsterdam? Of course, there are many other excellent venues, but what this concert demonstrated to particular effect is that the acoustic of the Concertgebouw serves a wide range of music equally well. All four works in this cannily planned concert sounded absolutely glorious.

The juxtaposition of Wassanaer and Stravinsky was particularly enlightening since the finale of the former, a kind of manic jig, might have stepped straight out of Pergolesi.The resoundingly named Rijksgraaf Unico Wilhelm van Wassenaer Obdam (1692-1766) was one of those multi-faceted Enlightenment figures like Frederick the Great or the British Astronomer Royal William Herschel who combined composition with another career, in Wassenaer’s case as a Diplomat; none of this seems to have got in the way of his writing some very agreeable concertos in the Italian manner with – in this case – a beautiful ‘Siciliano’. The Royal Concertgebouw Orchestra played this music to the manner born with minimal vibrato and a fine sense of style and gesture.

Wassenaer’s hors d’oeuvre segued neatly into the 1949 Suite from Stravinsky’s Pulcinella. At first it seemed that everything was just a little too well-mannered for the slapstick world of commedia dell’arte. All such thoughts evaporated with a beautiful oboe solo in the ‘Serenata’, and more glorious wind playing later, and a hilariously deadpan account of the ‘Vivo’ from both the solo trombone and the double bass. Alan Gilbert allowed his players their heads with minimal intervention and they responded with a combination of enthusiasm and finesse. 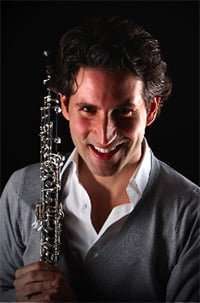 Quite the most remarkable performance of the evening came with Richard Strauss’s autumnal Oboe Concerto. Written in 1945, this was the first fruit of the composer’s post-war exile in Switzerland. Strangely, John de Lancie, the then young American oboist of the Philadelphia Orchestra had been stationed at Garmisch and it was he who suggested to Strauss that he write “a piece for oboe”. On this occasion, played by another young oboist, Lucas Macías Navarro – since 2007 the Concertgebouw Orchestra’s co-principal – this was a revelation. The concerto normally comes across as an elegiac bonne bouche, an affectionate glance over the shoulder to the world of Mozart; here, aided by some superbly detailed playing from the RCO, it evoked a deeper and more touching resonance. Navarro’s tone – elegant, plangent and different from the typically wider German oboe sound, served this work especially well.

The American link continued with Hindemith’s inelegantly named Symphonic Metamorphoses. Completed in 1943, this received its first performance from the New York Philharmonic-Symphony Orchestra the following year under Artur Rodzinski, Alan Gilbert’s one-time predecessor in New York and a notoriously difficult man who commenced his tenure in New York by dramatically dismissing 15 of the players (including the Concertmaster), although he was later obliged to re-instate several of them.

Given that it was composed in the depths of World War Two, Hindemith’s muscular four-movement work is a surprisingly upbeat jeu d’esprit. Only the Andantino hints at darker things. Three movements are based on pieces Weber wrote for piano duet and the ‘Turandot’ scherzo is derived from a theme which Weber found in Rousseau’s Dictionary of Music as an example of Chinese music. Finally all the sections of the Concertgebouw Orchestra were heard in their glory, a fabulous first flute, with the brass catching the jazzy syncopations of the scherzo; the Andantino marked by a truly remarkable depth and beauty of string sound, and the finale – surely the weirdest transformation of something originally written as a funeral march – culminating in the most exuberantly uninhibited conflagration.