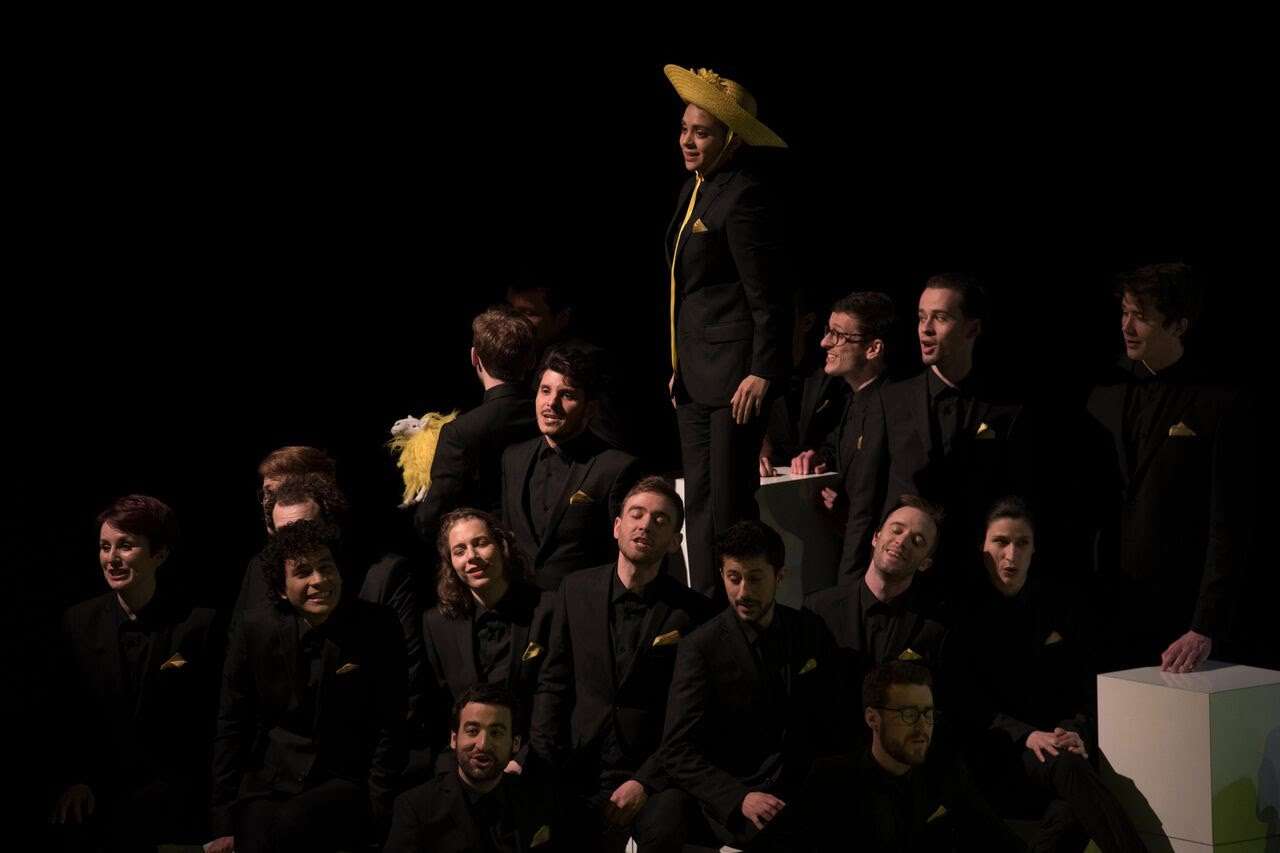 Although Rameau’s stature as one of the geniuses of Baroque opera is now little questioned on either side of the Channel, performances of his operas remain scarce, especially in the UK. This collaboration between the Académie de l’Opéra de Paris and the Centre de Musique Baroque de Versailles, and co-produced with the Royal College of Music, is believed to be the first time that the colourful opéra-ballet Les fêtes d’Hébé (1739) has been staged in Britain, despite being a conspicuous success in Paris during the composer’s lifetime and through William Christie’s fine recording. The work’s subtitle – ‘Les talens lyriques’ – will also alert enthusiasts to the quasi-iconic status it holds, having been borrowed as the name for another ensemble, prominent in our own time as an exponent of French Baroque repertoire, in particular, under Christophe Rousset’s direction.

The drama itself is slight, and serves only as a celebration of the ‘lyrical talents’ of poetry, music, and dance in the ensuing Entrées (Acts): Hébé – sung here with graceful fervour by Pauline Texier – has warded off the unwelcome advances of Jean-François Marras’s vocally robust Momus, and left Mount Olympus to witness a tripartite spectacle in honour of those Arts on the banks of the Seine.

As in Rameau’s other stage-works, ballet is prominent and Thomas Lebrun’s production keeps his choreography to the fore, undisturbed by little else. In the Prologue a line of white cubes at the front of the stage creates a sense of distance between the audience and Hébé’s Olympus, but are then dispersed, though the way in which the cubes are moved around by the dancers from the end of the second Entrée and into the third became a distracting affectation in the absence of a more-insightful idea. 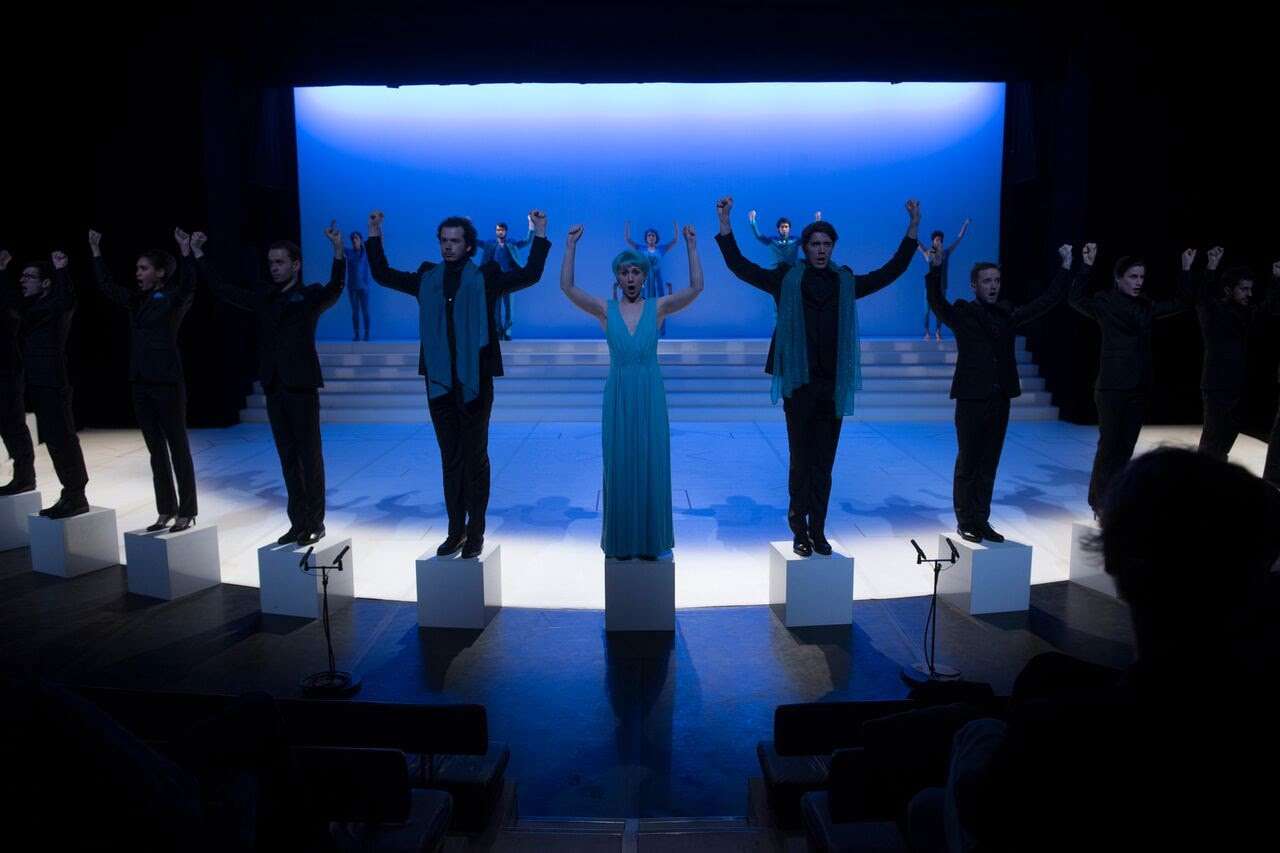 For each Entrée a different shade prevails in the lighting and costumes – respectively blue, red, and yellow, juxtaposing the three primary colours across the whole work, rather as Poussin tended to do in his paintings, and evoking neo-Classical severity (albeit brightly so) as opposed to Rococo extravagance. The choreography is similarly stark and angular – its gestures sometimes more like semaphore – rather than miming the motions of Rameau’s dance-forms, and the use of leotards for a few of the male dancers is not best calculated to bring out the elegance of the human body either.

The dancing was belied by the vigour and variety of Jonathan Williams’s direction of the Royal College of Music Baroque Orchestra, where the dances were vividly characterised with the lower parts imitating the sounds of a hurdy-gurdy or a musette. Andres Villalobos assumed the stage in the third Entrée to play the oboe, taking the cue from a shepherd’s attempt to woo the dancer Églé – a part again realised with seductive aplomb by Texier. After a fairly genial way with the Overture, rather than boisterous (at least compared to Christie) Williams drew a neat and flexible contrast between the vitality of the dances and the direct, simpler form of expression required to accompany the singers’ arioso-like declamation of the words. 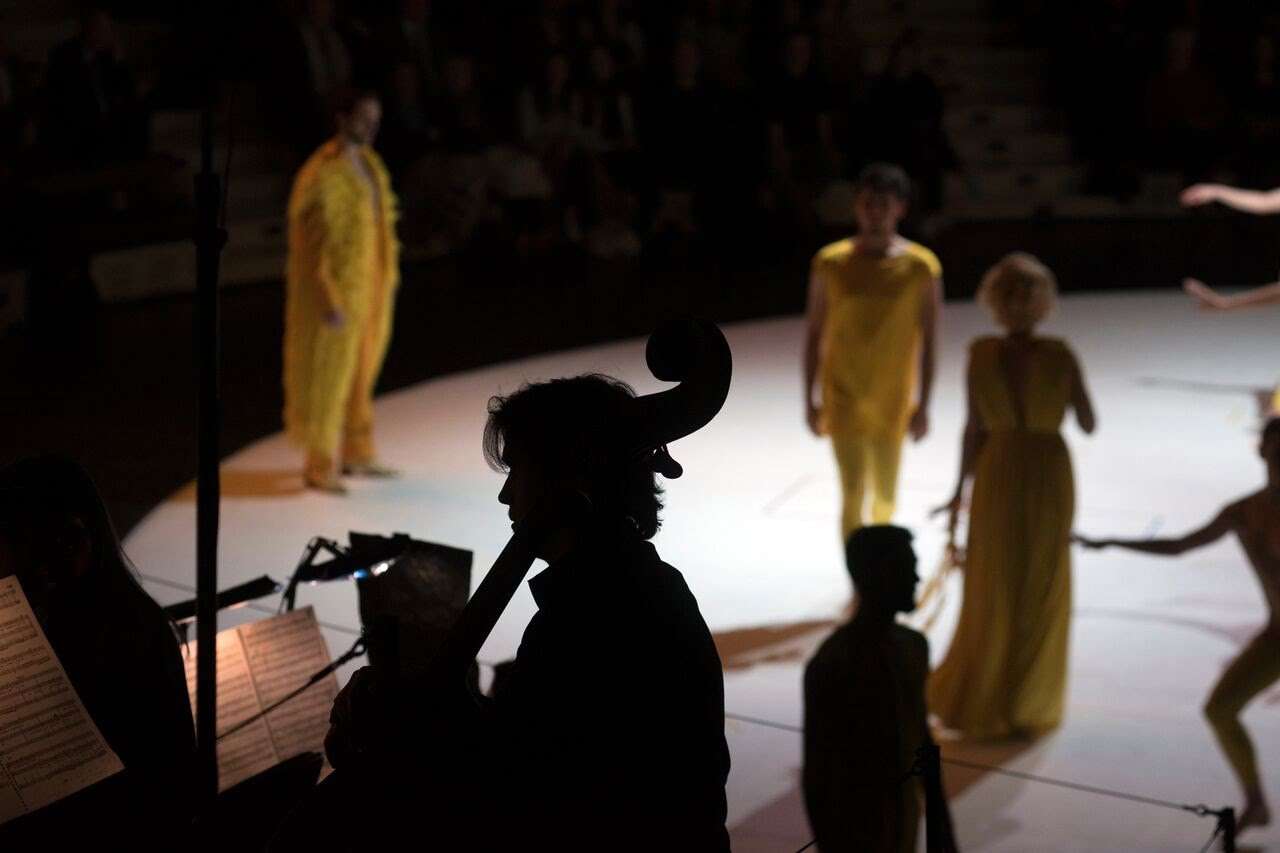 Among the singers Adriana Gonzalez stood out as Sapho and Iphise: despite suffering from laryngitis she still carried considerable weight, and there was only some wobble and inaccurate intonation in the latter part. The haute-contre roles of Thélème and Mercure lay just a little out of Juan de Dios Mateos’s range, making for a slight nasal edge to his singing, but in fairness it more or less suited his otherwise well-acted caddish slant – first as the duplicitous Thélème, and then as the dark horse Mercure, appearing in disguise to aid his amorous pursuit of Églé. Mikhail Timoshenko and Jean-François Marras were correspondingly more heroic in their roles, as they should be. Tomasz Kumiega exuded appropriate lyricism as the lovers Alcaeus and Eurilas, wistfully so in the latter case as his adulation of Églé is thwarted by Mercure. The rest of the cast provided dependable support, as did the members of the chorus, who also played their part in the choreography.

Although the correlation between drama and music convinced more than that of the choreography with those aspects, I have no doubt that for others the dancing will have been stimulating and entertaining. It was certainly consistent as a concept and well-executed, and so it is only just to note that from a technical point of view this is an auspicious collaboration among the institutions involved and ought to encourage others to explore the rich fusion of the Arts which Rameau’s works can offer to contemporary interpreters. It also confirmed Jonathan Williams’s position at the forefront of such exponents in Britain today, building upon his successful “Rameau Project”, and audiences can look forward to his Dardanus with English Touring Opera in the autumn.