Watch with Mother, Seen but not heard

The Infernal Galop – A French Dance with English Subtitles 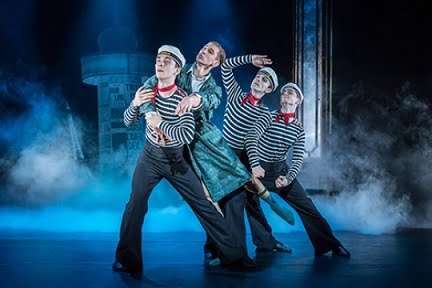 It is thirty years since Matthew Bourne started choreographing, and what successes he has achieved in that time – he is the man who brought us ‘that’ Swan Lake (male swans); he has reimagined the other two great Tchaikovsky ballets as well as bringing his own takes on works as diverse as Cinderella and La Sylphide. Recently, he successfully brought The Red Shoes to the stage, a long-held dream, and is now a regular, yearly Christmas fixture at Sadler’s Wells. But it is also good to remember some of his more modest works from his early years and to see what in him has changed and what has remained the same; his most recent evening, ‘Early Adventures’ allows just that, but the format may ultimately detract from the overall impression.

Bourne is nothing if not a man with a deep knowledge of and love for the past – his works are crammed full of affectionate references, either to specific dance works or the classics of the silver screen or, indeed, society of days gone by. In this most recent outing for three of his early pieces, this theme of nostalgia runs deep; indeed, it does more – it is the raison d’être for them all. In this, and also in the similar structure of each – a series of numbers or vignettes – one cannot escape a certain sameness which threatens to overshadow their undoubted qualities. 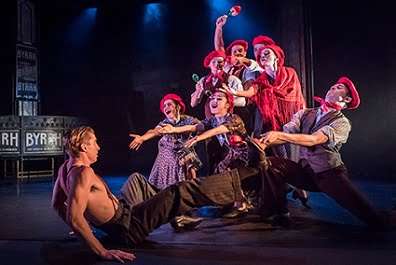 New to revival is Watch With Mother (Seen but not heard) from 1991, a 30-minute evocation of primary schools of yesteryear, all itchy grey tabard dresses and shorts with school ties as belts. Bourne evokes the playground, the country dancing class, the games of doctors and nurses, with the inevitable outsider, the boy always left out from the communal games. Being Bourne, the shadow of this outsider being the gay one is never far, but the signs are subtle, the ending upbeat as the kiddies troop off and the outcast is offered a hand of friendship. As a work it is slight, so slight in fact, that its 30 minutes come and go to little real effect. All praise to Bourne’s dancers, who trip and skip for all their worth, but it is a one joke, one concept piece which, without bringing in a far darker side to the play of children, leaves anything but a lasting impression.

Meatier fare by comparison with the diptych Town “Louden Lots” and Country “More Clingingly”, again a trip down memory lane, the former of toffs being attended to by vaguely hostile staff. Highlights include bath-time for a patrician couple, including fun with the loofahs and some artfully positioned towels as they emerge from the tub, and an at-first reluctant and then more intimate dance for two men to Noel Coward’s ‘Dearest Love’. Town starts and ends somewhat messily, Bourne’s movement palette not in itself expressive of much without specific narrative, but his three minute distillation of Brief Encounter is ingenious if utterly incomprehensible to anyone unfamiliar with the 1945 film. Country is set in the bucolic fantasy of Merrie Englande in which peasant girls milk cows and peasant boys wear smocks; Lez Brotherston (Bourne’s scenic collaborator of several decades standing now) provides a ravishing backdrop in 1930s travel poster hues. Again, there are comings and goings, with sight gags and witticisms – Bourne is not only the artistic son of the black and white film era but also the music hall – but, tellingly, the biggest laughs come from business with glove puppets of country animals. Country shows that Bourne knows his Frederick Ashton, not only from the ne plus ultra of bucolic comedies, La Fille mal gardée, but also other works such as Façade. 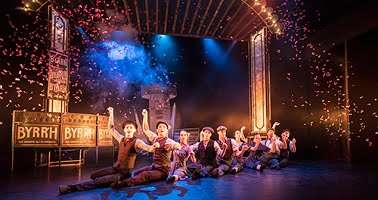 The Infernal Galop is billed as ‘A French Dance with English Subtitles’, supposedly a picture of France as the Brits see (saw) it. The music, a series of classics from the big names of wartime and post-war music: Charles Trenet, Edith Piaf and Tino Rossi and ending, slightly bafflingly, with Offenbach’s Can-Can from Gaîté Parisienne. As a picture of France, it is somewhat shaky, again, the movement unable to portray much in certain sections without an explicit narrative. Bourne is on firmest ground when he lets his fantasy full rein – an effete Frenchmen in sea-blue silk dressing gown and matching socks becomes a merman, serenaded and finally caught by three swaggering matelots – it is glorious nonsense and irresistible. Similarly, a man-on-man encounter in a pissoir veers off into the uproariously surreal as their several attempts at intimacy are interrupted by a maracas wielding group of dancing Latinos. Elsewhere, there is less focus and, let truth be told, the British view of the French of this war and post-war period would have been coloured with other opinions than those we see here.

Bourne’s dancers give their considerable all throughout, with some delightful characterisations along the way, but any one of these three works would have had more effect if presented alongside work from other stages in Bourne’s creative output. As it is, the relentless series of ‘numbers’ in all three reduces the impact of each work and the dancers’ own irreproachable efforts.