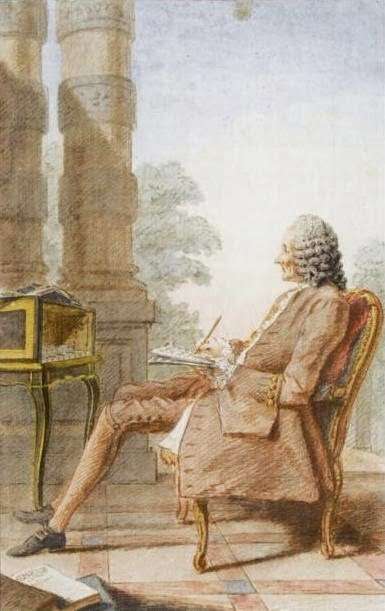 Following the double-bill from Les Arts Florissants two days earlier, the Rameau celebrations continued with the Early Opera Company’s presentation of Platée (1745). If not quite so musically ravishing as the former, or as visually enticing (this was essentially a concert performance), there was undoubtedly great liveliness and humour in EOC’s performance, savouring the wit and irony of Rameau’s first comic opera.

The story concerns the attempt by Jupiter to quell the jealous rages of his wife Juno, through his pretending to fall in love with Platée, an absurd and unprepossessing nymph who inhabits the marshes. The part of Platée was created as a transvestite one, and Thomas Walker assumed that role here with much charisma, dressed in a turquoise suit, but retaining facial hair. His more whining, nasal singing was clearly meant to point up the farcical aspects of her character, whereby she thinks that any man she meets is completely besotted with her; elsewhere, more lyrical, expressive singing by Walker rounded out the role as one still capable of sincere, human feelings.

In a more conventionally coquettish – though technically impressive – manner, Emmanuelle de Negri took the part of La Folie (Folly), pointing out with gentle humour the foibles of mankind and the gods. More spiteful, however, was Emilie Rénard’s Juno, culminating in a wicked laugh at Platée’s expense, almost worthy of Kundry, when she understands Jupiter’s ploy.

As Jupiter, and Momus in the ‘Prologue’, Callum Thorpe was authoritative, filling the venue with his sonorous tones, but dramatically he was less convincing. That was certainly not the case with Mark Milhofer’s acting in the parts of Thespis, and of Mercury subsequently, which was playful and mischievous. Although his singing sometimes sounded pinched, the notes were pitched accurately, and at other times, as Mercury, he was notably expressive.

As with many of Rameau’s operas, the drama is set up in by a group of immortals in order to demonstrate some general truth about reality – in this case the foundation of comedy, with its send-up of humanity’s flaws, and romantic vanity in particular.

The lack of accompanying staging or choreography threatened to make the abundance of musical interludes and dance-numbers seem superfluous. But that was just about avoided by the energy and impetus given by the EOC, conducted by Paul Agnew (replacing the unwell Christian Curnyn). Having sung in this opera with both Les Arts Florissants and Les Musiciens du Louvre, Agnew clearly understood the dramatic pacing required, and this came over in the generally sturdy performance – sometimes sounding closer to Handel than one might necessarily expect of Rameau. But a variety of orchestral colours and timbres were skilfully demonstrated.