Orchestra of the Age of Enlightenment
Jonathan Williams 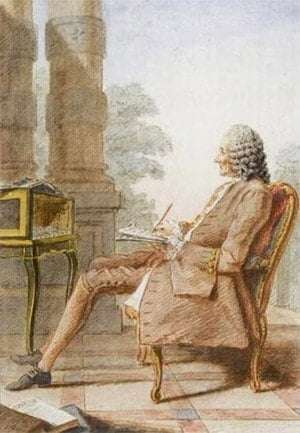 Many of Rameau’s thirty or so stage-works are now common currency among the opera-loving public, but Zaïs (1747-8) is one of a good few others which remain obscure (this performance was apparently its British premiere). The work was described as a “ballet heroïque” or as a “ballet en action” by its librettist, and dancing certainly plays a more significant and integral role than the seemingly frivolous ballets of later French opera. This production was a joint enterprise between the Orchestra of the Age of Enlightenment and The Rameau Project (masterminded by the conductor here, Jonathan Williams, and currently under way at Oxford University to research authentic performance-practice in presentations of Rameau).

The Paris-based Les Plaisirs des Nations realised Edith Lalonger’s choreography dressed in vivid 18th-century costumes. Otherwise this was a semi-staged production with no scenery, but a fair amount of interaction among the singers. Their austere attiring in smart black modern clothes threw the ballet into greater relief, rightly revealing the latter as an essential part of the drama. In this celebration of love and constancy the dance numbers colourfully manifested the joy of being alive and the pleasures of possessing human form. The dancers’ graceful movements harmonised perfectly with the music by matching its every gesture and flourish, in many ways therefore bringing into reality a Gesamtkunstwerk, avant la lettre (to mix languages if not metaphors).

As the narrative is fairly simple, it did not feel very much of a lack that there was not more stage action. It seemed strange, though, that some singers sang from memory, whilst others followed a score, but to be fair, this did not hinder the dramatic pacing of the musical delivery. Some effective lighting also evoked an atmosphere, most notably in the Prologue’s depiction of dawn on the first day after the unravelling of Chaos and the separation of the Four Elements as they form the cosmos. The goddess Amour appears as the culmination of this process by bestowing love upon the world, setting up the allegorical framework (itself a projection of royal government at Versailles) in which the ensuing plot unfolds among mortals.

With the OAE placed at the back of the stage, it took a while to adjust to the somewhat distant nature of the sound produced, and even allowing for that, the Overture depicting the Elements could have been more a little more arresting. Thereafter Williams’s measured account generally suited the music. The scores of Rameau’s operas are more seamless and fluid than the sequences of boldly contrasting arias in those of Handel, for instance, and so the former do not necessarily need quite so overt propulsion. To make up for that, perhaps at times the OAE could have invested a final layer of finesse in the music so as to entice the aural senses and avoid a slight tendency to plod in some of the dances, but this was by no means a serious deficiency. Mention should be made of Steven Devine’s accompaniments on the harpsichord, coming into and out of prominence from the wider texture, but sensitively supporting the singers without obtruding when the other instruments fell silent.

Jeremy Budd took the lead role, the King of the Sylphs, who is in love with the shepherdess Zélidie. His singing sounded rather nasal and strained, without much expressive phrasing, though he was tonally more melodious after the interval – perhaps this was partly an off day for him. In contrast, Louise Alder was a model of noble vulnerability as Zélidie, in undergoing the ordeals which Amour has commanded Cindor put her through to test her fidelity (some interpreters see freemasonic allusions here, as in The Magic Flute). Ashley Riches gave a commanding, even fearsome, portrayal of Cindor, though also instilling just enough knowing wit and irony in his attempts to overwhelm Zélidie which called to mind something of the braggart-type characters one encounters in Molière’s plays or Pierre Corneille’s The Theatrical Illusion.

Katherine Watson sang Amour with unaffected clarity – although some more dramatic allure might even have been welcome – whilst David Stout was sonorous in his appearances as Oromazès in the Prologue and conclusion, though the distinctive appoggiaturas and trills of Rameau’s music often sounded somewhat approximate in his case. There were no such problems on the part of Katherine Manley, Anna Dennis or Gwilym Bowen in the smaller roles, the latter sounding much more mellifluous in a more or less haute-contre tenor range here than Budd in the more standard tenor part.

Leaving aside these small misgivings, this was a real feast for ears and eyes with all components coalescing into a satisfying unity. The OAE unveiled this work as another gem of Rameau’s output, and having received only one complete recording (by Gustav Leonhardt in the 1970s) it is surely crying out for a new one by William Christie, Marc Minkowski or Christophe Rousset. In the meantime I very much look forward to the OAE and The Rameau Project’s next collaboration in the autumn with Pygmalion and Anacréon.