Rarescale has put on a number of imaginatively-planned recitals in London since its debut five years ago, and this offering – in the spacious and acoustically gratifying venue of St Leonard’s Church – was a typically diverse and challenging programme that the ensemble met head on. 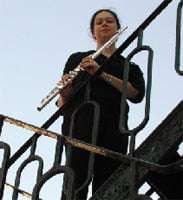 Diverse in mood as much as in content, the first half opened with L’aube enchantée – a raga-inspired piece composed by sitar luminary Ravi Shankar for the flautist Jean-Pierre Rampal, here realised in an evocative arrangement for bass flute and harp. Barely half the length, She Cried (2007) by Shiva Feshareki, made twice the impact – a brooding and often plangent monologue for solo bass flute which, given a modicum of exposure, could become a meaningful test-piece for the instrument in the way that Varèse’s Densité 21.5 has long been for the ‘standard’ flute. Two harp pieces provided a divertinginterlude: ‘Ten Past Two’ is a chic number from the Around the Clock suite by Pearl Chertok, her music well-regarded by harpists but otherwise better-known as long-serving harpist of the Columbia Symphony Orchestra; while Debussy’s First Arabesque (1888) sounded nothing if not idiomatic in this lucid transcription.

The first half closed with the premiere of Long Adrift Sleep (2007) by Tom Ingoldsby. Its title derived from a lyric by Canadian songwriter Matt Budden, this 16-minute piece is described by the composer as “both a gentle reflection and exultant celebration of a life”. Musically it grows organically from an inward opening section, through alternately lively and meditative passages, to a ‘second half’ with the feel of an extended scherzo – its rhythmically agile outer portions enclosing a lyrically intense trio – before the opening ideas re-emerge more or less directly as a subdued postlude. The work received a committed first performance (Ingoldsby is a composer whose music is rather easier on the ear than it must be to play!), and will hopefully enjoy further airings by the ensemble for which it was written.

Ingoldsby’s standing as one of the most distinctive composers of his generation is further reflected in the recent recording of his concert overture They Once Were, performed by the Kiev Philharmonic Orchestra and Robert Ian Winstin as part of Volume 11 of the series Masterworks of the New Era – issued on the ERM label (ERM-1168) in a three-disc set which includes recent works by a range of American, Australian and British composers. Additionally, Ingoldsby has recently signed to Cadenza Music, which plans a number of publications and recordings. First to appear is a volume featuring all three of Ingoldsby’s piano sonatas, which will be followed by a recording by Clive Williamson. A disc of chamber pieces, with Rarescale, is also planned.

The second half also featured new and recent works. Utilising the trade-name of his chosen music-paper, Geoffrey Gordon’s Bright White Smooth (2006) is a finely-integrated assembly of gestures that reflects its inspiration in a three-part ‘sonatine’ whose sections blend imperceptibly into each other. Twice as long, Lowell Liebermann’s Sonata for Flute and Harp (1997) was only half as rewarding – its continuous slow-fast-slow sequence expertly followed through and no doubt idiomatically written, but (as with other works by this composer) desperately wanting in arresting or memorable ideas. A ‘Gavotte’ and ‘Gigue’ – transcribed by Peter Maxwell Davies from his ballet Caroline Mathilde – were delightful in their relative elegance and robustness, and the evening ended with Debussy’s masterly Sonata for Flute, Viola and Harp (1915), the most elusive of his three late chamber works in building of a structure whose thematic intricacy is achieved despite (or because of) its elusive instrumentation.

A worthwhile recital, then, by an ensemble whose enterprise and artistry are both deserving of a far higher profile, Do try to catch Rarescale’s fifth anniversary Gala Concert in London this September.