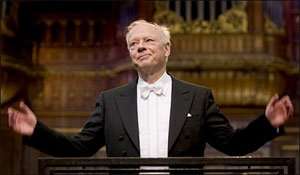 Four days after leading a superlative account of Mahler’s ‘Resurrection’ Symphony with the Boston Symphony Orchestra (at Tanglewood), Bernard Haitink here made his Ravinia debut with the orchestra of which he is Principal Conductor, the Chicago Symphony Orchestra, in another equally-great performance of a Mahler symphony, this time the nihilistic Sixth.

The set-up at Ravinia (approximately 20 miles north of Chicago) is almost identical to that at Tanglewood: a large shed (the Pavilion) with lots of seating and surrounded by lawn for the many hundreds to take along picnics. Like the Koussevitzky Music Shed in Tanglewood, the Pavilion has a superb acoustic: bright with a direct sound out to the audience such that every orchestral detail is audible. Only the last desk of the cellos was on risers, without detriment the woodwinds and certainly helpful in taming the trombones and trumpets. The overall result was an embedded sound, very wholesome. 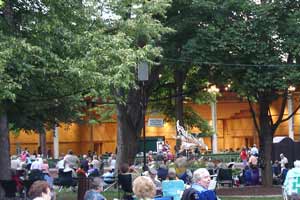 Debate continues over the ordering of the middle movements, despite the fact that those performances that Mahler himself conducted placed the Andante second. When the score was first published, the scherzo was the second movement to this symphony, due to a last-minute if indecisive change of heart on Mahler’s part. Kahnt re-ordered the movements for its ‘second edition’ prints. However, many conductors, including Haitink, continue with placing the scherzo second.

This Ravinia performance was a pulverising success, each of Haitink’s interpretative choices supporting the symphony’s overall structure and the journey that we are taken on. A determined and arduous (in the best sense) tempo for the first movement (exposition repeated) gave way to an expansive pastoral-like retreat, a touch of distant thunder (I drove through an horrendous downpour on the way to Ravinia) during the cowbell-coloured section added frisson.

In fact the scherzo coming after the mammoth first movement here seemed entirely appropriate, its ideas answering those of what had just been heard. It also made the lead from the Andante to the tortuous final movement even more desperate. Unfortunately, it is sad to report that a loudspeaker emitted a dreadful noise about three minutes before the end of the first movement that continued throughout the scherzo. Nevertheless a glorious harp and horn duet in the slow movement, given with sublime musicality gave it a gentle flow, Haitink’s control never robbing the music of its spontaneity.

The finale towered above the glories of the previous three. Given an epic sweep, with well-judged tempos, the contrasts between the tumult and the collected were huge. The first hammer blow, whilst devastating in effect, paled when set against the second, which seemed to knock on the doors to damnation. Haitink resisted the temptation to play the third ‘superstitious’ blow. There were moments of pure contemplation, with Concertmaster Robert Chen’s contributions quite superb. The final, anti-victorious, eruption was the crowning achievement. What a pity that a barbarian felt it necessary to shout “bravo” over the final pizzicato.

Hopefully the Chicago Symphony will not lose contact with Haitink when Riccardo Muti assumes the role of Music Director.