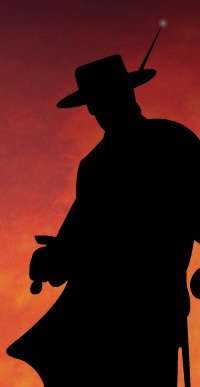 It’s not been a good year so far for new musicals in London. “Gone with the Wind” lived up to its title and was blown away; “Marguerite” is holding in there to the music of Michel Legrand; but “Casanova”, the story of the celebrated lover and librarian, was probably the best of the three, as it was the least pretentious.

Now, as if to prove that new musicals can be good and fun, along comes “Zorro”, a show about a pulp-fiction hero of a famous book and numerous comics, who became equally successful in a succession of films from 1920 up to the almost the present day. With Spanish music from The Gipsy Kings (who actually come from France) the musical version of “Zorro” has all the hallmarks of a stonking great hit.

The character of Zorro was dreamt up in 1919 by Johnston McCulley, a newspaper-man from Illinois who authored his story as a serial for the magazine “All Story Weekly”. The character was Robin Hood crossed with Hopalong Cassidy (“who was that masked man?”) and provided the template for all following superheroes that were to follow – such as Batman, Superman, Spiderman, The Incredible Hulk, et al – in which a wimpish knucklehead can turn himself into a man of great strength in order to save the world. 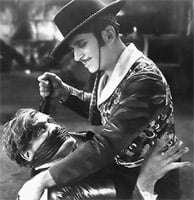 Douglas Fairbanks made the first film about the masked hero, “The Mark of Zorro”, in 1920, since when there have been some forty more, including a sequel with the ever-athletic Fairbanks, and a 1940 remake with Tyrone Power, which is generally thought to be the best version with a very exciting duel between Power and Basil Rathbone. There was a movie serial called “Zorro Rides Again”, as well as a television series, and “Zorro’s Black Whip” which sported a female masked heroine. Nearer our time George Hamilton did a very funny spoof-version in “Zorro, the Gay Blade” and of course the two recent films with Anthony Hopkins, Antonio Banderas and Catherine Zeta Jones were monster hits.

The legend lives on in “Zorro”, the musical, with a new book by Stephen Clark who also wrote the lyrics. As well as being an exciting tale of life in a Spanish settlement in California in the early-19th-century when the inhabitants are being hounded by Ramon, the wicked stepbrother of Don Diego whose father, the Spanish nobleman Don Alejandro, has been imprisoned by Ramon and forced to sign away his power to the incipient ruler. Don Diego, a travelling magician, whose laid-back charm conceals a man of hidden strengths, assumes the guise of El Zorro, the masked bandit and cunning fox who is the only one who can release his people from the tyranny of Ramon. Luisa, the love of his life, cannot see who she is dealing with, but falls in love with Zorro anyway until he reveals his true identity.

All the exciting possibilities of this action-packed story are translated to the stage with immense style, wit and panache. The writer obviously had his tongue well and truly stuck in his cheek, so the whole enterprise never once takes itself too seriously except as a musical show of charm and originality. As well as a good book, the music is also a great asset to the show. The music of The Gipsy Kings (remember “Bamboleo”?) as played by the Zorro Band, has the audience clapping along, whistling and cheering at every opportunity. Even if you are not a fan of flamenco music, this show will still lift your spirits because it’s a tonic from beginning to end.

Matt Rawle as Zorro proves his quality in a very energetic performance, during which he leaps about, flies around on ropes, has hair-raising sword-fights and still manages to catch his breath. The magic tricks of Paul Kieve and Scott Penrose are quite mind-boggling as they manage to make Zorro appear and disappear in a puff of smoke. Talking of smoke, there is a lot of fire in this show, too, which is quite heart-stopping at times. The special effects and the sheer pace of the show are really astounding. At my performance technical trouble delayed curtain up by nearly an hour, but it was worth the wait.

“Zorro” has a large and well-drilled company constantly on the move in Rafael Amargo’s brilliantly imaginative choreography. Emma Williams as Luisa is a strong character and has a belting voice, Adam Levy glowers to great effect as the villainous Ramon, and Lesli Margherita as a sexy gypsy girl is a splendid foil to Diego’s antics and not without a sense of humour. When Diego is messing about trying on various disguises, she comments: “What are you going to do, entertain them to death?” Well that’s what “Zorro” the musical is capable of. It is quite the most entertaining new show to come along in a month of glum days at the theatre.