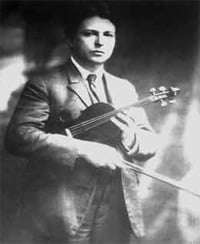 Although the reputation of George Enescu (1881-1955) as an all-round musical force has never been seriously in doubt since his death, that of his music has fared poorly – the First Rumanian Rhapsody being the only piece by which he is known to the world at large.

One aspect of his output to have seen a markedchange is the chamber music, with a growing number of musicians including it in their programmes, and one such is the partnership of Remus Azoitei and Eduard Stan – whose discs for Hänssler of Enescu’s output for violin and piano occupy a central place in the Enescu discography.

This Wigmore Hall recital featured both of his mature masterpieces for the medium, juxtaposed with works by one of his lifelong devotions. 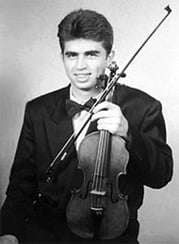 Opening a recital with Impressions d’enfance (1940) would be a tall order for any violinist. Outwardly a sequence of childhood recollections, albeit realised with astonishing technical and expressive clarity,its ten sections – lasting from a few seconds to several minutes – are imbued with a motivic cohesion such as make it a fourth sonata in all but name. Amazingly, it was first recorded only as recently as 1996and live performances remain rare. From his soulful rendition of ‘The fiddler’, it was clear Azoitei had the measure of this score, guiding the listener through fond but never merely nostalgic evocations of beggars, garden streams and caged birds with an eloquence that seemed the more touching for itsunderstatement. The central ‘Lullaby’ had a winsome poise, while subsequent depictions of moonlight, wind and storms were allied to an intensifying trajectory on the way to ‘Sunrise’ – in which innocence and experience become suffused with a powerful catharsis. An enthralling reading of a singular work.

That Brahms imagined any such all-encompassing design for his Third Violin Sonata (1888) is wholly unlikely,but this last and finest of his contributions to the medium has a comparable expressive range. Some slight lapses of intonation aside, Azoitei steered a purposeful course through the opening movement – its mingling of defiance and fatalism typical of Brahms’s last decade – and found a tender yet never flaccid repose in the Adagio. The brief but tensile intermezzo was characterfully delivered, while the finale had a sustained emotional charge in which Eduard Stan’s pianism was at its most commanding.

The second half began with two short pieces. The Impromptu concertant (1903) is one of several pièces d’occasion in Enescu’s output and one of several test-pieces written near the turn of the last century for the Paris Conservatoire. Elegant and passionate by turns, it was well complemented by the FAE Scherzo that the young Brahms had written half-a-century earlier as his contribution to a sonata composed with Schumann and Albert Dietrich. Its fieriness tempered by sustained eloquence, this is most often heard as an encore and so its inclusion in the main programme was most welcome.

The programme ended with a riveting performance of Enescu’s Third Sonata (1926) – one of his mostperfectly achieved works and one that has now rightly established itself at the centre of the violin repertoire. As with all the composer’s mature pieces, its fearsome technical demands serve a wholly personal vision.

Azoitei handled the simmering emotional charge of the first movement with a rare conviction, as he did the ethereal shades of the central Andante: the former’s harmonic ambiguity as finely rendered as was the latter’s ‘night music’ resonance, in which quarter-tones and glissandos were scrupulously well integrated. The finale had the right cumulative momentum, its climactic surge making the outcome of a formal process as complex emotionally as it is musically. With Stan unstinting in support (though a piano part of this intricacy is in no sense an ‘accompaniment’), this was a memorable account of a work whose stature increases with each successive performance.

Happily, the duo had enough in reserve for the Ballade (1896) which is one of the teenage Enescu’s most attractive shorter pieces, given here with restrained fervour. It made for a captivating end to a recital that confirmed Azoitei and Stan among the most outstanding of younger duo partnerships.