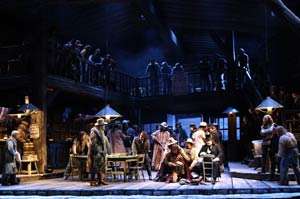 Amazingly, Royal Opera’s production of Puccini’s ‘Wild West’ opera is now over 30 years old – and more surprisingly two of the original creative team were reunited in this revival. Piero Faggioni was on hand once more to direct his minutely detailed production afresh and the original Jack Rance, Silvano Carroli, was back to reprise the role. Kenneth Adam’s intricate and beautiful sets still look well – even if they take an inordinate time to change between the acts – and the evocative mountain range images on the cyclorama still provide an effective backdrop and are effectively lit. Some of the effects now seem a little contrived these days – the windows and door suddenly blowing open and shut just as she kisses Dick Johnson for the first time for example (yes – I know this is in the score, but it could be managed a little more subtly).

That being said – the piece is like that! I do not recall the production starting with the theatre and pit in complete darkness before, the stage gradually coming to life as Antonio Pappano and the Orchestra launched breezily into the short introduction was a good start. Pappano’s has a way with Puccini and always manages to capture the distinct character of each opera’s soundscape. For ‘Fanciulla’, he kept the sound full and the score very much on the move relishing the dissonance and unresolved harmonic progressions. The cakewalk-derived themes were jaunty and ear-catching, the gently lilting waltz that evolves into much of the thematic material with the growing love between Dick and Minnie insinuating its way into the orchestral textures. Pappano also caught the brashness and violence that is present and thankfully avoided any sense of mawkishness in the love scenes. It’s a great score, and the lack of applause-demanding moments following also help keep the theatrical pulse ticking. 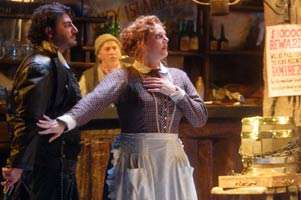 This first-night revival was blessed by a knockout performance of the strenuous title role by Eva-Maria Westbroek, who not only looks the part but also sings it superbly. Her voice has both the requisite power and beauty of tone, and she has both excellent diction and a lightness of touch to be totally convincing as the gentle moralistic girl with a heart of inner strength, forcefulness and feistiness. There was much humour to her portrayal too – and so the character’s vulnerability was also tellingly portrayed. She must rank as one of the best interpreters of the part.

Her interplay with José Cura’s Dick Johnson was very believable and there was a sense of spark between the two. He is a charismatic performer and physically and dramatically made both a credible lover and a bandit with a conscience. As always with Cura’s opera-performances of late the vocal side was more erratic. There’s a good baritonal tenor voice in there somewhere, but, frustratingly, although there are moments of stylish singing and of beautiful singing, too, there is also a coarseness and lack of focus. So while more finesse would have been welcome, he certainly inhabits the part.

It would be good to report that Silvano Carroli’s performance was top notch, but his tone is now rather threadbare and his singing was lacking in nuance and somewhat stentorian. He knows what the part is about though and caught Rance’s ruthlessness and charisma in terms of acting – but generally the casting of the central trio of characters works better when Rance is a younger man who poses a more obvious and direct rivalry with Johnson for Minnie’s heart. Carroli’s Rance seemed rather paternal.

There are opportunities for notable cameos. Eric Halfvarson as Ashby is luxury casting indeed and Bonaventura Bottone’s sympathetic Nick certainly registered (though he cannot efface memories of Francis Egerton’s ‘dotty’ interpretation of almost every previous revival). Daniel Sutin made a strong impression as a hot-headed yet generous-hearted Sonora, and Vuyani Mlinde was an affecting Jake Wallace – but then he does have the best tune in the whole opera! Graeme Danby and Clare Shearer managed to make the two ‘Red Indians’ less cringe-worthy than they can sometimes be. But this is really Westbroek’s show – and it will only get better!