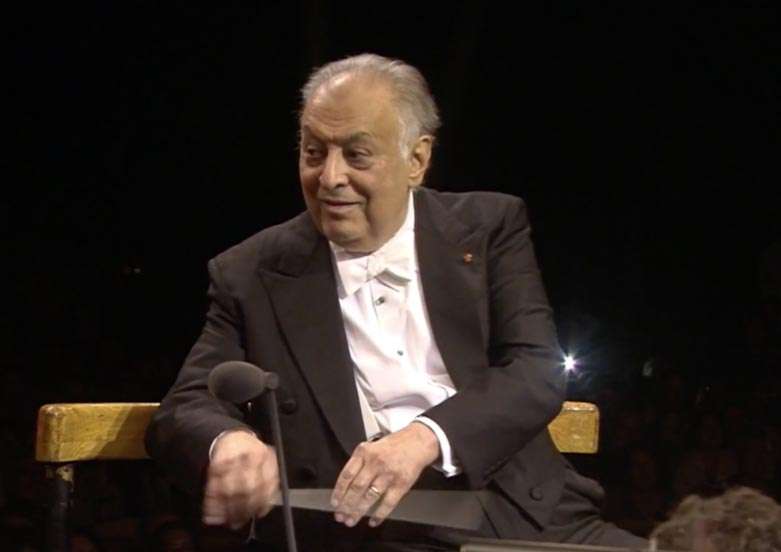 Jūrmala is a resort to the west of Riga, Latvia’s capital. From the Riga Jūrmala Music Festival, Zubin Mehta and the Israel Philharmonic – currently touring the starry summer shindigs (such as Lucerne and Salzburg) – presented one work (at least that’s all that was broadcast*), Berlioz’s Symphonie fantastique.

Mehta, now eighty-three, although slow-walking and stick-assisted, and requiring a seat on the podium, has lost none of his intellectual focus and honed technique (as ever, no need for a score), and his close-on sixty-year association with the Israel Phil (many as music director, a position he is soon to relinquish, Lahav Shani his successor) bore seasoned fruit with no staleness of familiarity.

With some poetic contributions from woodwinds and horn, the Reveries of the first movement were beguiling and later Passions were heady – helped by tangible close-focus sound (antiphonal violins carried a sheen and the left-positioned bass line was especially potent; camerawork was choppy though, I stopped watching). There was a persuasive ebb and flow at work here, similarly in the succeeding Waltz, given with unaccustomed grace, although the concluding stage lacked sweep. Emotional ambiguities in the country-located slow movement were fully realised culminating in ominous (timpani) thunder, then the ‘March to the Scaffold’ enjoyed a well-judged moderate tempo, with brilliant and snarling brass-playing, and finally the Witches had a ball, not the most orgiastic party, but the musical curdling from the ‘Dies irae’ was vivid.

This was a treat, a virtual attacca performance (repeat-less in I and IV), with no ruinous clapping to get in the way, that hit the spot (for the most part) and rather wonderful that with a flick of a switch one can be transported somewhere that otherwise might just be a place on a map. As an encore, Johann Strauss II’s Thunder and Lightning Polka was given with an easygoing swing (Mehta’s Vienna associations paying dividends), and with a wave from the maestro to the audience it was that’s all folks.

*Postscript. Since writing the above I now understand that the concert’s first half was Rachmaninov’s Third Piano Concerto with (a presumably camera-shy) Yuja Wang: at least that explains why the Deutsche Grammophon logo was attached to Medici’s publicity, even if it was regarding an unstated non-broadcast appearance.