Carousel
A musical in two acts with music by Richard Rodgers to book & lyrics by Oscar Hammerstein II, based on the play Liliom by Ferenc Molnár, as adapted by Benjamin F. Glazer [performed using reconstructions of Don Walker’s original theatre orchestrations] 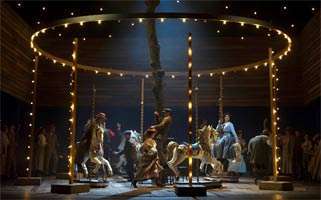 “He hit me and it felt like a kiss” sang The Crystals in their notorious hymn to mysogyny. That record from 1962 was produced by “wall of sound” creator Phil Spector, now serving time for shooting dead a young actress who, he claimed, “kissed the gun”. Such justifications for male abusive behaviour are nothing new: what goes around comes around, as this revival of the aptly-named Carousel uncomfortably demonstrates when an abused mother explains to her daughter, who has just been struck by the ghost of her dead father, that “sometimes, someone can hit you and it doesn’t hurt at all.”

If that moment proves anything, it is that Rodgers and Hammerstein were far more than mere purveyors of sentiment. Carousel (first staged in 1945 in New York), their second collaboration, revisits dramatic types from Oklahoma! with its hick community populated by marriageable women, vulnerable men and matriarchal figureheads, but whereas that earlier show was filled with light but light on tension, Carousel turns an ever-tightening screw of darkness and danger before allowing the audience the catharsis of a redemptive pay-off.

The central figure of Billy Bigelow, an impassioned young man unable to take control of either his temper or his life, needs to be played with far greater complexity than Michael Todd Simpson is able to muster. The American baritone’s leaden stage presence is not helped by his struggles with Rodgers’s vocal demands; the score’s higher-lying passages do not sit comfortably for him, and the only edge in his performance is the serrated one to his timbre. As Julie Jordan, his wife and victim, Katherine Manley has the ideal vocal quality but she presents too stolid a character, with little going on behind the eyes. For the play’s conclusion to hit home, Julie’s reaction to Billy’s final line should be devastating, not disconcerting. 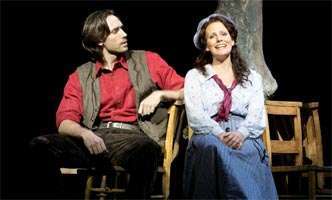 These pivotal weakness are unfortunate given that everything else about Opera North’s summer showpiece is so good. Two decades ago the company mounted Show Boat, another Hammerstein musical about an innocent girl who falls for a no-good low-life, so with Carousel the wheel has turned full-circle. Jo Davies’s production is vibrant, sensitive and unpretentious, with Kim Brandstrup’s superbly choreographed pas de deux for Julie’s daughter Louise and her suitor (Beverley Grant and Simon Jaymes) and some smartly stylised sets by Anthony Ward that are exquisitely lit by Bruno Poet. The only slight disappointment on the production side is the use of directional rifle microphones to boost some of the voices, a decision that leads to uneven peaks and dips in volume as the singers perambulate around the stage. 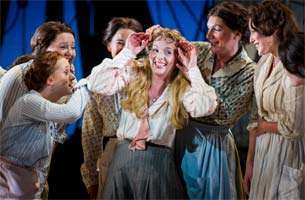 The Royal Ballet Sinfonia plays Rodgers’s score (as originally scored by Don Walker) with decent-enough flair under James Holmes’s secure direction, while of the supporting cast, Michael Rouse (Jigger) and Joseph Shovelton (Enoch Snow) prove to be the show’s dramatic lifeblood, each leading the way with depth, dynamism and the technical know-how of true actors. As for the distinguished veteran John Woodvine, he brings customary grativas and warmth to bear as the Starkeeper.

Opera North has taken the surprising decision to add a second cast of principal performers to share the load during the London season. This seems extravagant considering that most West End musicals make do with one player per role in runs far lengthier than Carousel’s modest tally of thirty-seven performances. A careful check of the Carousel micro-site (link below) reveals when it will be possible to see Eric Greene and Gillene Herbert return to the roles of Billy and Julie for which they were acclaimed when this production opened in Leeds in May. Caveat emptor, however, for anyone who follows that route would miss out on the two marvellous examples of luxury casting that grace this opening Barbican cast: Sarah Tynan’s gloriously galumphing and luminously sung Carrie (imagine Ado Annie channelling Phoebe from Friends) and the magnificent presence of Yvonne Howard as Nettie Fowler, walking through the storm with her chin held majestically high.