Elfyn Jones
The Trial of Jean Rhys – An opera to a libretto by Eleanor Knight [selection of scenes; sung in English]

Elfyn Jones’s preview (click here to read) whetted the appetite. Here was a chance to sample a goodly part – nearly 45 minutes – of The Trial of Jean Rhys. (There had been a performance the night before.) Given as part of this year’s Tête à Tête Opera Festival (continuing until August 19) – which showcases new theatrical work in whole or in part in the unprepossessing, somewhat bohemian if welcoming Riverside Studios (a home for artistic experimentation, film, plays and music) – it was well-worth making the trip to catch up with it.

Presented for Tête à Tête by World’s End Opera, The Trial of Jean Rhys is currently ‘in progress’, but snippets have already graced a couple of Linbury Theatre presentations of upcoming creation; indeed, a completed Jean Rhys would be an ideal candidate to be staged in the Royal Opera’s subterranean space. In the intimate Studio 3 of the Riverside, however incomplete and however selected, what we saw and heard made for compelling music-theatre. Jones’s musical language is traditional and approachable, expressive, and always personal and genuine. Jones has a knack of suggestion and characterisation but without making it overt (technically, his two- and three-part contrapuntal writing, in terms of vocal duos and trios, is admirable) – drawing the spectator in and allowing his or her imagination room to develop in parallel to what the eyes see and the ears hear. 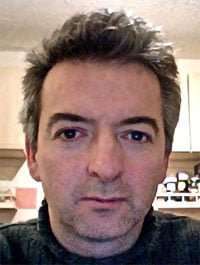 Whether Jones eventually scores for more than a piano when the work is complete I know not; suffice to say that the composer was an adept, stylish and sensitive accompanist (French-speaker – un petit peu – and furniture-shifter, too), playing innately as to tempo, phrasing and dramatic pacing, opening proceedings with a soulful and lonely prelude, perfectly setting the scene for an elderly and embittered Jean Rhys to appear as she examines her life while living in her inhospitable Devon dwelling, which she does through the intake of whisky and with irascible actions (further fuelled by paranoia) and finds her past years wanting; this despite the huge if “too late” success of her novel, Wide Sargasso Sea. The pacific Sam Greenslade (farmer and taxi-driver) takes her flak while remaining faithful and performing handyman tasks, such as changing a light bulb as well as supplying booze and fags. It seems that her other neighbours are not so sympathetic or tolerant.

Flashbacks to the younger Jean while in Paris offer contrast through her earlier life of flirtations and high-society connections, while noting its superficiality and soullessness. As portrayed by Julia Weatherley (a sweet-voiced and charismatic singer with fearless coloratura), one perceives ‘Young Jean’ in a world she both relishes and despises. As older Jean, Linda Hirst may now be somewhat strained vocally, but she has the role to a T, creating before us a regretful, quick-tempered, shuffling and staring-eyed woman, sometimes brandishing a kitchen knife (but that’s a secret between her and staunch Sam; nobody will ever know).

On the small stage of Studio 3, direction and design were commendable; the plastic bucket spoke of the bungalow’s leaking roof, and the brandy glasses (filled) recalled Parisian high-society as did Jones’s use of music to recreate high-kicking vaudeville. The more ruminative musical illustrations seem to have echoes of Chopin (he was after all transplanted to Paris) and Poulenc (a native, one with an awareness of the ‘popular’). Not that Jones apes, for he has an intrinsically direct musical and narrative contact with onlookers; and back in Blighty, Jones creates a stark atmosphere that leaves in no doubt that Rhys’s self-scrutiny is painful.

However, this must be an interim report. Clearly much is in place to bring The Trial of Jean Rhys to final fruition: librettist Eleanor Knight is salient with her use of words and the six singers (maybe more are needed for a full staging), if a little uneven in quality, clearly have the best interests of the work through their skills and in their hearts. Certainly there is here a chamber opera that could be successfully embraced by companies and audiences alike.