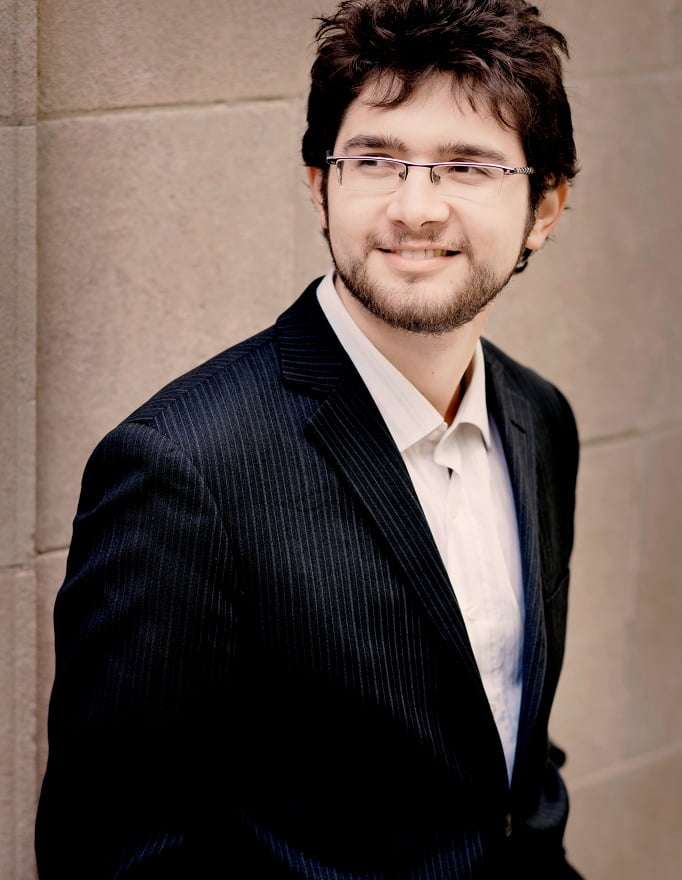 The Israeli pianist, composer and visual-artist Roman Rabinovich shared the top awarded prize (joint-second to Khatia Buniatishvili’s third place) at the 2008 Arthur Rubinstein International Piano Master Competition. He’s a polished, quietly unassuming player, free of histrionics but not without a mannerism or two – his dramatisation of pauses, for instance, and willingness to gap the musical flow before tricky passages whatever the text or agogics.

His Haydn displayed culture, left-hand detail, fluid dynamics and teasing humour (don’t play Haydn if you don’t get his jokes). Achingly expressive was the slow movement, embodying late-eighteenth-century romancing and nuance whispered with a caressing touch – Haydn the lover-to-be of “the girl in rose”. The one quibble was the opening Allegro, where the dotted rhythms were repeatedly, carelessly, loosened into triplets, obscuring if not nullifying the triplet contrasts wanted in the development section.

Written earlier this year, Rabinovich’s own Memory Box is a set of six linguistically accessible miniatures traversing a variety of moods, states and scenes in ways reminding fitfully of the Franco-Spanish masters with a whiff of jazz thrown in for good measure – given Rabinovich’s pianism and imagination, I wonder what he might do with Debussy’s Préludes or Granados’s Goyescas? In this performance, limpidness and sound-painting to the fore with a “grooving crescendo” to finish, the order of the fourth and fifth movements of the published programme – ‘Cicada gigue’, a “palate-cleansing vignette”, and ‘Impatience of the heart’, a Zweig-inspired lament, was reversed.

Rachmaninov’s 1931 Corelli Variations, transitional between the Fourth Piano Concerto and Paganini Rhapsody and sharing traits with both, found Rabinovich journeying the Russian soul with conviction, the extraordinary final pages turned into a forgotten landscape, a last will and testament of D-minor, and D-pedalled, darkness. This was a commanding interpretation, rich in lightening-flashed changes of texture, colour, weight and athletic attack, Rabinovich’s technical arsenal encouraging the driest of angular left-hand work, richly pedalled reflections, and leaning caesuras falling, melting and vanishing like flakes of snow on a winter afternoon. At once dreamer, improviser and architect, he held the structure and tension of the whole supremely well. And the Voix céleste registration he brought to the skeleton of the theme (‘La folia’) was more special than I can remember.

With Chopin’s Ballades, the main course of the evening, the voltage dropped. Yes, there were moments to hold the attention in the First (E-flat counter-subject, elegantly cadenced) and Second (the sense of characters and voices in a crowded room, now clear, now distant). But overall, incidental beauties notwithstanding, this was a rather plain overview, too soft-centred and pianistically ‘feathered’, too floating, to do justice to the music, incident and rhythm within these works. I wanted more grit and incision, more articulated definition, less pedalling. Occasionally the shaped rubato (No.4 particularly) went a step too far, more contrived than spontaneous in impulse.