It was a treat to hear all eleven pieces from Musica Ricercata and especially so in this performance. With an attractive stillness and economy of movement, Roman Rabinovich was part of the machine and rarely can this hallowed venue have heard such extravagant at-the-edge-of-what-is-possible panoply of colour, shading and silence. The risk-taking extended to the piano itself, which had been tuned to within an inch of its life, flirting with vulgarity and brightness, yet such was Rabinovich’s conviction and courage, it worked. 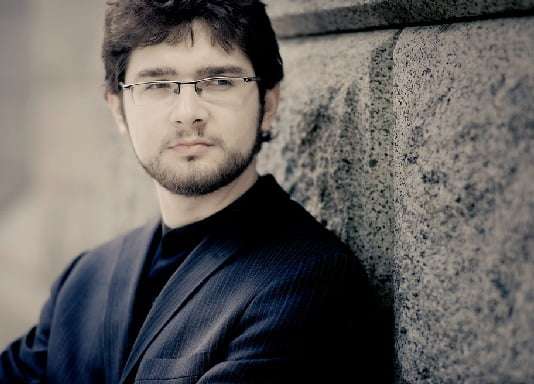 Probably only the pianist will fully understand the seriousness of the work (as in Ligeti’s instruction to “depress keys without sounding”), but from the outset Rabinovich had a mesmeric grip on our attention, confronting us with the note A, again and again, professing Ligeti’s unique quintessence of sound, giving himself acres to go with dynamics and playing with miraculous control and telling, tiny, butterfly alterations to tempo, an account not primarily led by rhythmic or compositional complexity. Rather this was playing marked by sheer beauty – of tone in terms of note production, and of sparse harmony, as one note sang openly, cleanly allowing one chord or an individual note to project. Although individual pieces are sometimes played in isolation, the work only makes true sense as a whole, as each piece builds on the preceding one; yet for all the academic ‘cleverness’ of the work, this was emotionally-charged and, at times, hair-raising in execution.

By contrast, some of the tautness in evidence dissipated in the Bach Partita, though nothing justified a man near me fidgeting with a game on his phone throughout. Notwithstanding Rabinovich’s crisp elegance, here he favoured a broader, more obviously pianistic approach, somewhat generalised, and overly pedalled. The ‘Sarabande’ would have benefitted from a far statelier pace, although the ‘Gigue’ felt freer and rippled along beautifully.

One of life’s great pleasures is to sink into a Schubert Piano Sonata. In D958 Rabinovich dished up the goods; his approach was essentially rugged and Beethovenian. This was a thoroughly engaging rendition, with tempos finally judged. Keen to explore and pinpoint modulations and voices, Rabinovich was at times too keen to signpost a harmonic shift, and once or twice that was distracting leading to a sense of waiting for the next moment of interest. Rabinovich completely inhabited the Adagio, and led us into a mysterious, ambivalent and still world; it was all so tastefully restrained. The rugged tarantella Finale is one of Schubert’s earworms that can be both falsely-jolly and mournful, and Rabinovich explored this to the full with his impulsive and earthy version.

We were treated to two encores, both from Rachmaninov’s Moments musicaux, Opus 16. The first, D-flat, held the audience, when some people begin to leave only to find themselves standing in slight embarrassment, rooted still, as notes floated above them. This was sugar-free Rachmaninov-playing of the highest order. The E-minor Presto was then tossed off, with a relaxed and unfussy drawing out of inner voices.