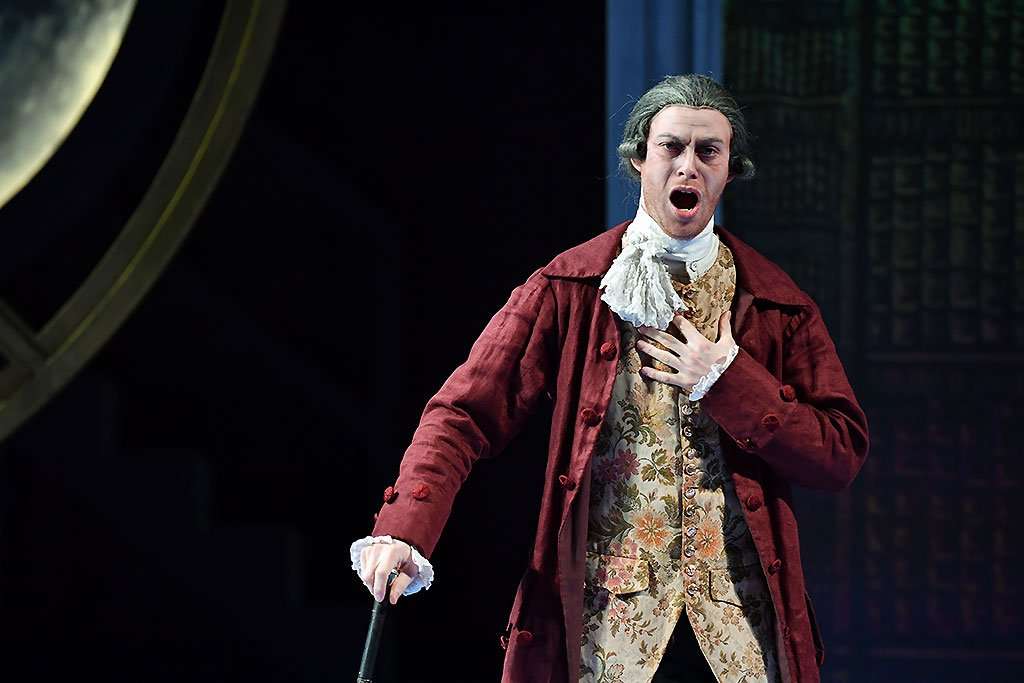 You wait for one Haydn opera to come along, and then two arrive. Following the Guildhall’s production of La fedeltà premiata earlier this month, the Royal College of Music now mount the rather better-known Il mondo della luna (The World of the Moon) in the fiftieth anniversary year of the first moon landings. That is something of a joke itself, perhaps, since in the scenario by Goldoni on which the opera is based, the characters do not actually arrive on the moon – they merely make the gullible old Buonafede believe he has. The classic opera buffa device of deceiving the old fool is perpetrated in order to overcome his tyrannical opposition to the marriage of his two daughters to the men they love, as well as that of his servant Lisetta, on whom he has designs himself. Amidst the jollity and froth, as in the very best comedy there are also some underlying, poignant comments about the human condition – here mankind’s willingness to deceive itself in pursuit of its desires, and the hierarchies of human society – and it takes the creation of an alternative, make-believe world in order to show up our preposterous pretensions for what they are.

William Relton’s production maintains irrepressible good spirits throughout, particularly with Phillip Aiden’s nimble choreography, which reveals the structure of Haydn’s score to be as imaginative and fresh as anything in Mozart. Act Two – the sequence which purportedly takes place on the Moon – elicits from the composer some delightful flights of compositional fancy to accompany the ‘lunatic’ world depicted. It is hilariously realised by Relton here as a camp parade of characters whilst the Emperor of the Moon (actually Cecco, a servant in disguise, in true Lord of Misrule fashion) recounts the absurd practices of earthly customs, whilst the conman’s Ecclitico’s cohort sport masks of Trump, Putin, and Kim Jong-un – and no prizes for guessing which other would-be petty dictator nearer to home, alongside a handful of other well-known figures of the English loony right, to appropriate the notorious phrase of the reactionary press. It is no coincidence either that the garish, Malvolio-like costume in which Buonafede is mockingly attired on the moon comprises the identifiable purple and yellow colours of UKIP.

The charm of Haydn’s music is such that it often hides the demands made of the singers, to which they rise convincingly here. Theodore Platt’s Buonafede is fairly deadpan and musically assured, making him a halfway believable character, rather than a mere caricature of imbecility. As his daughter Clarice and Flaminia, Natasha Page and Jessica Cale hold their own with impressive, compelling force in contrasting but complementary roles that foreshadow Mozart’s Fiordiligi and Dorabella. If Cale’s coloratura goes slightly awry in her arresting first aria, that can be taken as emblematic of the character’s waywardness, and in any case can be forgiven in view of the game of badminton she has to play with her sister, in full 18th-century dress at the same time.

Glen Cunningham avoids over-projecting in his singing and so achieves a slyly persuasive depiction of Ecclitico – the rogue astronomer who first dupes Buonafede into believing that travel to the moon is possible, in order to win Clarice from his protective clutches. Anna Cooper also sings with a suitable directness and ingenuousness as the servant Lisetta, whilst still attaining musical cogency, alongside the correspondingly articulate account by Ted Black as Cecco, who also assumes the part of the Emperor of the Moon. Haydn originally wrote the part of Ernesto (Flaminia’s lover) for a castrato, and perhaps in knowing, ironic deference to that fact, in the Moon Scene he is here turned into an ostensibly hyper-macho leather queen, replete with bondage equipment. His music is presumably simply dropped an octave, as Jeremy Kleeman takes that in his stride in a dependable, unflappable performance of a part which stands in relation to Ecclitico somewhat like Ferando does to Guglielmo in Così fan tutte.

Michael Rosewell conducts the RCM Opera Chorus and Orchestra in an interpretation that is crisp and alert, driving the dramatic pace of this production grippingly, with typical Haydnesque sparkle (the Overture will be more familiar to some as the first movement of the Symphony No.63). Like Mozart’s acknowledged masterpieces, this underrated work bubbles with irresistible colour and vitality, as does the production, and should win converts to the rare gems of Haydn’s operatic output.