Skip to content
LnRiLWNvbnRhaW5lcltkYXRhLXRvb2xzZXQtYmxvY2tzLWNvbnRhaW5lcj0iNmIzNDMzNmNmZTc3NWZiNGJlMTVjMmIwMzU3NWM1MjYiXSB7IHBhZGRpbmc6IDI1cHg7Ym94LXNoYWRvdzogNXB4IDVweCAxMHB4IDAgcmdiYSggMCwgMCwgMCwgMC41ICk7Ym9yZGVyOiAycHggZG90dGVkIHJnYmEoIDEwOSwgMTA4LCAxMDgsIDEgKTsgfSAudGItZmllbGRbZGF0YS10b29sc2V0LWJsb2Nrcy1maWVsZD0iODM3Y2ExZjc0MGRjZDdkOTdlMzQzOWMyYjIwMWZmZTMiXSB7IGJhY2tncm91bmQtY29sb3I6IHJnYmEoIDIzOCwgMjM4LCAyMzgsIDEgKTtwYWRkaW5nLXRvcDogMTBweDtwYWRkaW5nLWJvdHRvbTogMTBweDtwYWRkaW5nLWxlZnQ6IDEwcHg7IH0g
LnRiLWNvbnRhaW5lcltkYXRhLXRvb2xzZXQtYmxvY2tzLWNvbnRhaW5lcj0iNmIzNDMzNmNmZTc3NWZiNGJlMTVjMmIwMzU3NWM1MjYiXSB7IHBhZGRpbmc6IDI1cHg7Ym94LXNoYWRvdzogNXB4IDVweCAxMHB4IDAgcmdiYSggMCwgMCwgMCwgMC41ICk7Ym9yZGVyOiAycHggZG90dGVkIHJnYmEoIDEwOSwgMTA4LCAxMDgsIDEgKTsgfSAudGItZmllbGRbZGF0YS10b29sc2V0LWJsb2Nrcy1maWVsZD0iODM3Y2ExZjc0MGRjZDdkOTdlMzQzOWMyYjIwMWZmZTMiXSB7IGJhY2tncm91bmQtY29sb3I6IHJnYmEoIDIzOCwgMjM4LCAyMzgsIDEgKTtwYWRkaW5nLXRvcDogMTBweDtwYWRkaW5nLWJvdHRvbTogMTBweDtwYWRkaW5nLWxlZnQ6IDEwcHg7IH0g
Chabrier
Une Éducation manquée – comic opera in one Act to a libretto by Eugène Leterrier & Albert Vanloo [sung in French and English, with English surtitles]
Poulenc
Les Mamelles de Tirésias – comic opera in two Acts to a libretto by the composer after Apollinaire [sung in French with English surtitles]
LnRiLWNvbnRhaW5lcltkYXRhLXRvb2xzZXQtYmxvY2tzLWNvbnRhaW5lcj0iNmIzNDMzNmNmZTc3NWZiNGJlMTVjMmIwMzU3NWM1MjYiXSB7IHBhZGRpbmc6IDI1cHg7Ym94LXNoYWRvdzogNXB4IDVweCAxMHB4IDAgcmdiYSggMCwgMCwgMCwgMC41ICk7Ym9yZGVyOiAycHggZG90dGVkIHJnYmEoIDEwOSwgMTA4LCAxMDgsIDEgKTsgfSAudGItZmllbGRbZGF0YS10b29sc2V0LWJsb2Nrcy1maWVsZD0iODM3Y2ExZjc0MGRjZDdkOTdlMzQzOWMyYjIwMWZmZTMiXSB7IGJhY2tncm91bmQtY29sb3I6IHJnYmEoIDIzOCwgMjM4LCAyMzgsIDEgKTtwYWRkaW5nLXRvcDogMTBweDtwYWRkaW5nLWJvdHRvbTogMTBweDtwYWRkaW5nLWxlZnQ6IDEwcHg7IH0g 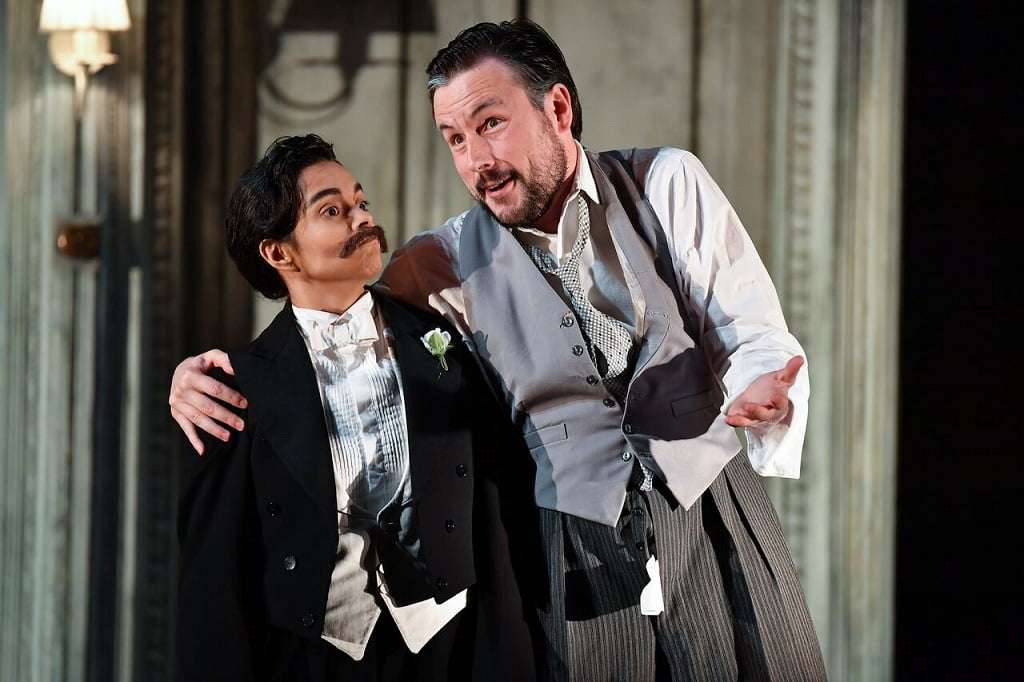 Two short stage-works at either end of the French comic spectrum wrapped up this year’s Opera Course at the Royal College of Music – Chabrier’s 1879 Une Éducation manquée (An imperfect education) and Poulenc’s 1947 Les Mamelles de Tirésias. Despite both being assertively French, neither seems to get out much in that country, although within the past decade they have travelled to the States, and the Chabrier has been done at Wexford. The Poulenc, which lasts for about an hour, is a useful double-bill work. Without a staging, you can’t imagine either thriving.

Opéra-comique charm and whimsy keep the Chabrier afloat, as the aristocratic newly-weds Gontran and Hélène, alone at last after the ceremony and in a state of high jitters, realise they don’t have a clue about doing what comes naturally on their first night together. Gontran’s tutor Pausanias is similarly ignorant. Even though it is only half-an-hour long, there is time for an Overture with easy-listening tunes winking ooh-la-la at you. Chabrier wrote the male lead as a travesty role for soprano, and Julieth Lozano’s dapper, perfectly formed Gontran makes a sweet contrast with the much taller Hélène of Rosanna Cooper – the tiny husband and the larger wife are always good for a laugh. Their sung French was much more confident than their spoken and untitled English. Lozano managed Gontran’s burgeoning confidence with some splendid high singing, and Rosanna Cooper’s rather more knowing Hélène came to life with a commanding presence and a very sexy lower mezzo range. Both entered into the music’s frothy spirit as impressive comedians, and are pushed into each other’s arms, not by Kieran Rayner’s generously drunken and excellently sung Pausanias, but by a terrifying storm. Stephen Unwin’s 1920s’ update (from the eighteenth-century) looks glamorous, with the happy pair suitably intimidated by Neil Warmington’s imposing set. 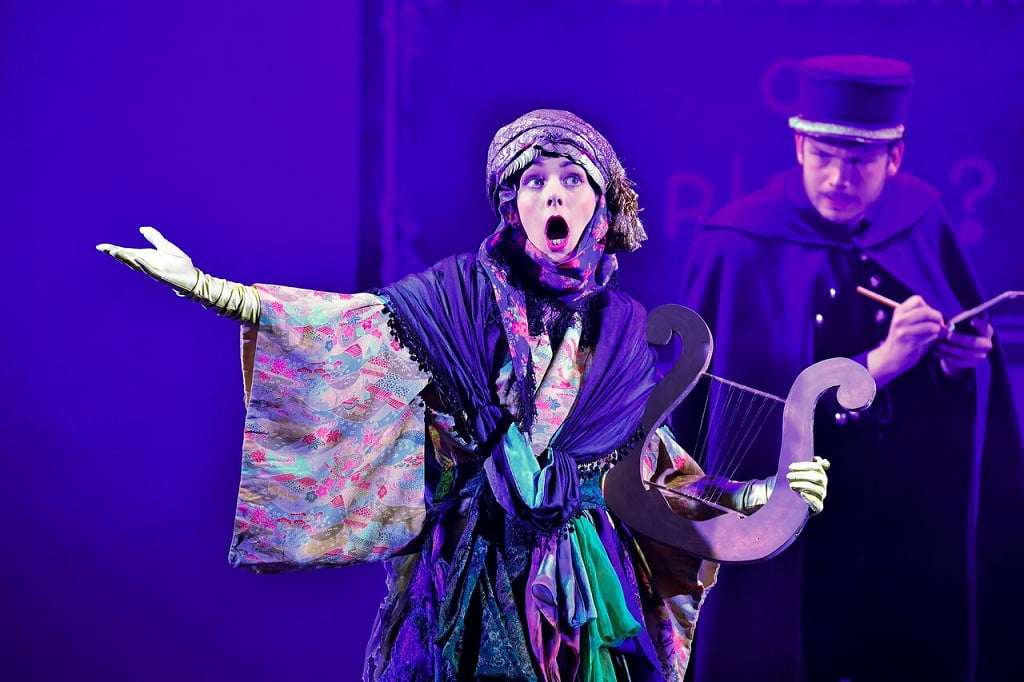 While the Chabrier is all sweet innocence, Poulenc’s Les Mamelles de Tirésias is anything but. Apollinaire wrote the play Poulenc adapted for his libretto after the First World War, and after the Second the composer used its fantasy as a bizarre comic piece of surreal agitprop about creating a postwar baby-boom. Thérèse turns the gender/feminist tables on her Husband, who, similarly transformed, mysteriously and spontaneously generates thousands of babies in just one day. Warmington’s chief design feature is a proscenium arch that moves up and down stage; Unwin’s direction of the large cast, all in 1940s’ costumes, is impeccably tight and executed with panache. The zaniness may be relentless but it’s also irresistible.

Under Michael Rosewell the RCM Opera Orchestra delivers all the influences and flavours of Poulenc’s layered score that moves from Chabrier to Offenbach via Stravinsky and Gershwin in a split, virtuoso second, and the singing was of a very high standard. Harriet Eyley as the breast-discarding, cross-dressing Thérèse/Tirésias led the show with diamantine brilliance and some sensational singing. She was partnered by Julian Van Mellaerts’s equally high-powered Husband, an also cross-dressing, bearded radical feminist of considerable interest to James Atkinson’s splendidly off-the-wall Gendarme. Poulenc gives all his cast members enough to make their individual mark, and there was no weak link. With so much talent at the RCM’s disposal, it was no wonder that Tirésias’s mamelles achieved such vigorous lift-off.