Offenbach
Robinson Crusoe – Opéra-Comique in three Acts to a libretto by Eugène Cormon & Hector Crémiux [sung in English, in a version by Don White, with English surtitles] 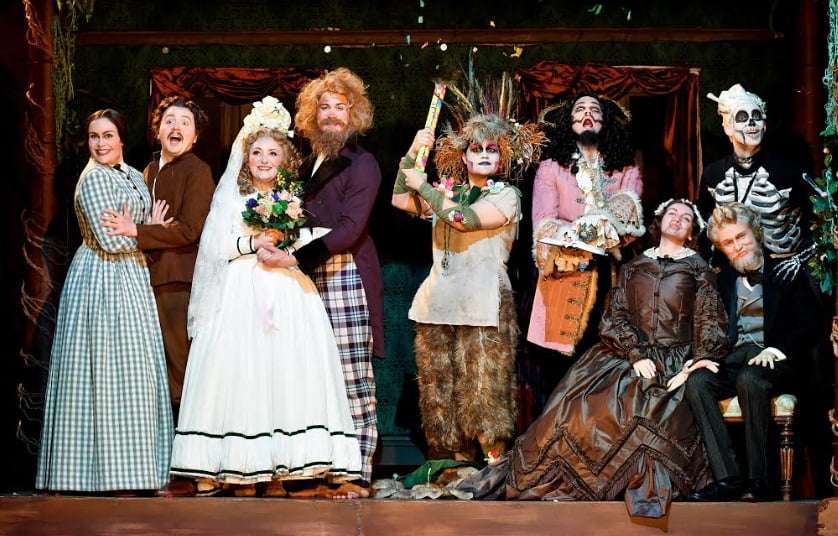 It seems something like a once-in-a-decade event that we get the chance to see Offenbach’s 1867 comic opera Robinson Crusoe after its 1973 Opera Rara Camden Festival production revived for a recording on that label in 1980, in tandem with a Proms performance (as far as I can glean from the Proms Archive, the only Offenbach given complete in Kensington Gore), conducted by Alun Francis in the English translation by Don White. Opera della Luna presented its own version by Jeff Clarke in 1994 and (at the Ilford Festival) 2004, while now it’s the inspired latest choice by the Royal College of Music Opera Studio, directed by Tête-à-tête’s Bill Bankes-Jones (who also directed a production in 1995 for Harrow Opera).

On those terms alone it’s worth catching, but it’s also a hugely engaging production of an irrepressibly tuneful piece despite its lack of original success (only eight performances in Paris). Not surprisingly it’s not particularly faithful to Defoe – the first six years of Crusoe’s island existence are dismissed in his Act Two opening aria, while the first Act is a quaint comic English domestic scene – here squashed into a tiny living room in the centre of the stage in Sarah Booth’s witty designs – the result of which sees Robinson dismaying his parents and sweetheart, cousin Edwige, by being called away to sea.

With some spectacular male hairpieces for the Crusoe men, which has grown like topsy during Robinson’s six-year (and seven-day) enforced sojourn on the island, though his quiff survives miraculously. Sartorially, Joel Williams’s ardent and likeable Robinson swaps his colourful Wildean garb, high-waist chequered trousers, waistcoat and jacket, for what looks like a furry tracksuit top and bottoms. Meanwhile Edwige – serendipitously stranded on the same island after an attack by pirates, with servants Suzanne and Toby – keeps to her white crinolines, which, with her blonde hair, makes her the cannibals’ sacrificial victim to their god Saranah. Catriona Hewitson makes the most of her pyre-top showstopper ‘Take me away to the one I adore’ (once recorded by Joan Sutherland, no less), which the company waltz to. If that sounds incongruous, remember we’ve just had the company Can-Can as a backdrop to Suzanne and Toby’s contrary love-song that starts with joyous memories of why they married and ends with intentions of divorce (‘I can’t think why I married you’). Suspend your disbelief: it’s Offenbach! 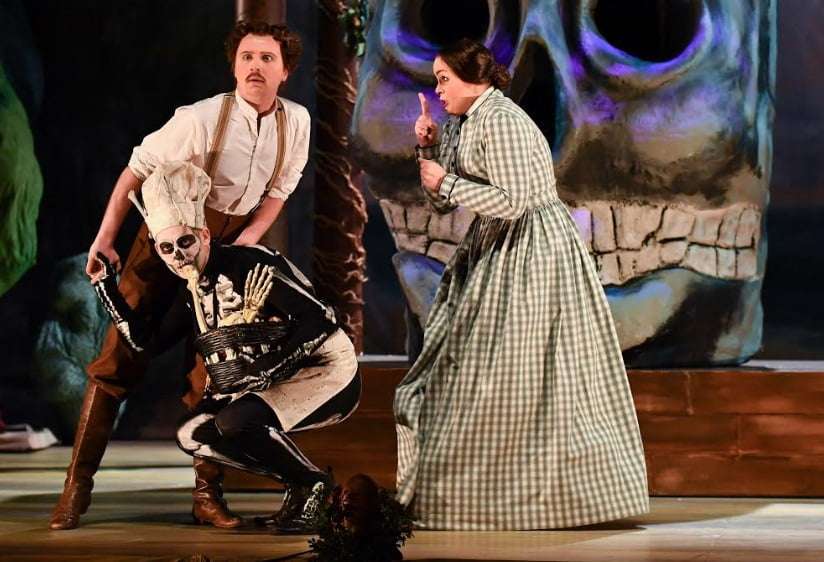 All of this is done with gleeful verve, to which a credible dash of pantomime is thrown in at the end when the pirates arrive (I see Edward Jowle, who plays the leader, Will Atkins. complete with hook in hand, has form in the role – he’s been the Pirate King in the much later Pirates of Penzance). Don White’s still-relevant lyrics are at their funniest in Act Three’s ‘There’s no place like England’, with its mentions of strikes, dole and our national sport, “cheating the tax man”. And typical of White’s rhyming expertise is Friday’s song about how much he likes his name, where Fleuranne Brockway doesn’t miss a trick.

Michael Rosewell in the pit (“Hit it Mike” shouts Friday to start his aforementioned song) gives his players the chance to let their hair down (only in the pirates’ chorus, the band drowns out the words, though surtitles allow the sense to come through), and any stiffness in the unrelenting succession of frothy tunes will lighten up during the run. The orchestra has its own spotlights, including ‘A Sea Symphony’ – the prelude to the second Act, with definite echoes to Offenbach’s famous Barcarolle, which we now know predates Robinson Crusoe as it was first used in Rhinenixen three years earlier.

Katy Thomson’s rich-toned Suzanne and Michael Bell’s Toby make a strong-woman/weaker-man double act, though I felt Suzanne’s discarding of her maid’s uniform to reveal a far less salubrious costume underneath in the first Act was unnecessary. On the island, Jim Cocks – a fellow Bristolian marooned four years earlier than Robinson who has become the cannibals’ chef – is memorably portrayed, skeletally by Theodore Platt, with a skull-like grin that won’t easily be forgotten. And there is a lovely touch at the end where, in a split-second, the island is transformed back to a small Bristol drawing room, costumes change back to English sobriety – including Timothy Edlin’s stentorian Sir William and Anna Cooper as excessively crinolined Lady Deborah, Robinson’s parents.

For Offenbach’s 200th-anniversary and, indeed, Robinson Crusoe’s 300th, surely there is no further excuse needed to catch any of the three remaining performances. There are alternative casts on March 15 and 18 March, while the reviewed cast returns on the 16th.