Facing one another across the expanse of two pianos Thomas Adès and Kirill Gerstein communicated through nods and facial gestures that kept them on the same page – at least figuratively; while Adès played from printed scores (aided by a human page-turner), Gerstein went high-tech, using a pedal-controlled tablet. 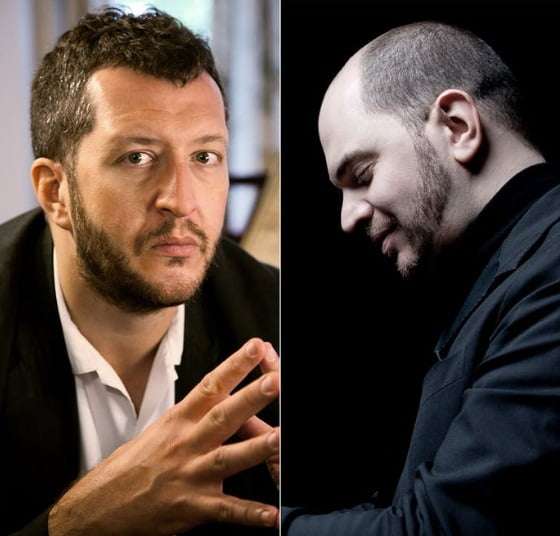 Powerful sonorities opened Debussy’s En blanc et noir, intricate counterpoint in the passionate opening movement making the instruments seem competitive rather than collaborative. In the slow middle one, dedicated to the memory of a friend killed in action in World War One, Adès and Gerstein captured the solemnity of the beginning bars, contrasting them with more upbeat episodes that include a quotation of the chorale ‘Ein feste Burg’ as well as suggestions of bugle calls and tolling bells. Gerstein then brought spectacular virtuosity to the succession of rapid-fire figures in the light-hearted Scherzando.

In Shostakovich’s transcription of Symphony of Psalms, the absence of the chorus and orchestra’s dense textures exposes the melodic lines. Adès and Gerstein produced a rather imposing sound in ‘Exaudi orationem meam’, a prelude to their spellbinding traversal of the double fugue setting of ‘Expectans expectavi Dominum’, whereas ‘Laudate Dominum’ juxtaposed Gerstein’s swift sequences with Adès’s bass line.

Paganini’s Caprice 24 has proved irresistible to succeeding composers, Brahms and Rachmaninov among them. Witold Lutosławski joined their ranks in 1941 in Nazi-occupied Warsaw, where he regularly played duets with fellow-composer Andrzej Panufnik. Adès and Gerstein played the Lutosławski brilliantly, bringing out the wit of recasting the Caprice’s variants with dissonant harmonies, altered tempos and rhythmic irregularities.

The second half began with Debussy’s Lindaraja, its Spanish-influenced rhythms and harmonies given a graceful reading. Next, Adès’s Concert Paraphrase of his 1995 opera, Powder Her Face, rife with irregular patterns and harmonies. In the dreamy ‘Ode to Joy’, Adès and Gerstein took advantage of the resonance of the dual pianos; in ‘Is Daddy Squiffy?’ Gerstein played a bouncily infectious tune; and in ‘Fancy Being Rich!’ the duo’s divergent melodies created the illusion of being out of sync. The final scene, ‘It Is Too Late’, built to climactic chords, after which a tango serves as an epilogue.

Finally Ravel’s two-piano rendering of La valse, written (along with a solo-piano version) before he created the orchestral score. Adès and Gerstein gave an utterly engrossing account of this masterpiece, a metaphor for the deterioration of European society in the aftermath of The Great War. The playing was brilliant and expressive as the waltz theme gradually emerged from deep tremolos, then blossomed and flourished, and ultimately collapsed, the chaos bringing the evening to a thrilling conclusion.