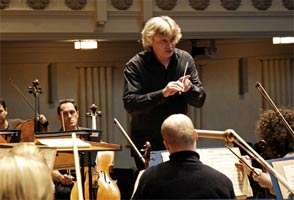 Following one concert (a few weeks ago) into something of a UK tour of this programme, Maxim Shostakovich has been “hospitalised in Moscow”. The remaining performances now fall to Grzegorz Nowak. For all his recordings of his father’s music, having Dmitri Shostakovich’s son at the helm of this concert was an instant attraction. That he wasn’t able to be present was a disappointment, especially as his 1970 recording of the Fifth Symphony with the USSR Symphony Orchestra is not only his best of it by far (and made when his dad was alive) but is also one of the very finest of this work.

The first half of this concert was so-so. The Festive Overture (corking little piece) found Nowak and the RPO bringing out its mock-pompous and frivolous side well enough, but the brass-playing was overloud and edgy (I really feel for the musicians in the firing line, Perspex screens or not), the strings barely audible (and not enough of them in the limited space of Cadogan Hall, its acoustic under pressure from this brassy assault). Piano Concerto No.2, another charmer (written for Maxim), also suffered a heavy hand, both of Natasha Paremski’s in fact; yes, she could play quietly, but there were some moments that were horribly aggressive and hammered – a real turn-off, both in itself and certainly in the immediate and confined Cadogan space; the peak of the first movement had nowhere left to go in terms of ultimate loudness. For all her technical control and clarity, and an admirable straightforwardness, Paremski’s playing was colourless and unimaginative, and fairly sensitive if literal in the Chopinesque slow movement, which here dragged. The outer movements were well-paced and enjoyed some pugnacious and nifty woodwind-playing, but this short work seemed longer than it should and cried out for wit and personality.

Balances were better and dynamics more discriminating in the Fifth Symphony. A few glitches in the playing aside, the nattily-attired Nowak led a rather compelling account. Careful if intense to begin with, with at least one awkward change of gear, and rather ponderous in the faster music, this was still a rough-hewn approach that had its own thrall. With carefully-terraced dynamics the movement reached its pinnacle with a sure touch, its chill aftermath sympathetically played. The scherzo was pulled-around and lost its built-in irony, but the slow movement was outstanding, very spacious, a true Largo (and lasting, to whom it may concern, all of 17 minutes), dispassionate in its interior, achingly intense in climaxes, the strings finding deep introspection, the woodwinds numbed eloquence (Kenneth Smith, a guest from the Philharmonia Orchestra, loading every flute note with significance throughout the performance). The difficult-to-bring-off finale was trenchant, sometimes reporting fury, and expressive of universal pathos at its mid-point. As for the ‘rejoicing’ coda, this didn’t come off; Mravinsky could do middle-of-the-road but implacably, suitably robotic; Masur opens out a massive paean of indestructible self-will; Bernstein and Previn nipped through the final pages glibly. Nowak was mainstream and managed to have the composer siding with the Party: no, no, no – but this was still a thought-provoking performance, blessed with a rather remarkable slow movement. Worth catching if the RPO is on the road to your town.