“Russians Rodion Pogossov and Sofia Fomina join with Ukrainian Oleksiy Palchykov in this programme of 19th- and 20th-century examples ranging from Glinka and Rimsky-Korsakov through to Prokofiev and Shostakovich.” [Wigmore Hall website]

The ongoing Russian Song Series at Wigmore Hall, curated by Iain Burnside, provided a tour d’horizon from Glinka to Shostakovich with a generous helping of Medtner and Rachmaninov, the all-encompassing traversal in the first half furnishing a rare opportunity to hear seldom-performed settings by Glazunov, Glière and Grechaninov (amongst others) spotlighting European and Oriental influences with no hard borders. If some composers were submerged by the sheer weight of this panoramic survey (Miaskovsky and Prokofiev never quite finding their place) the programming was boldly adventurous. 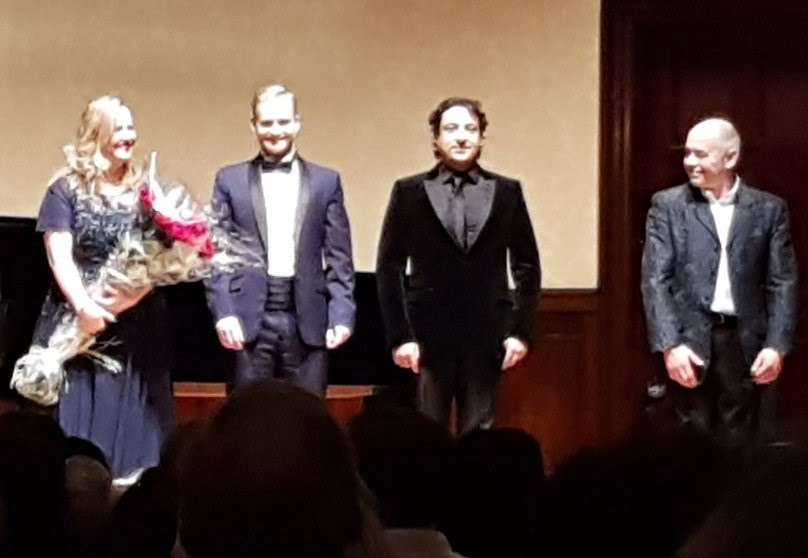 Three well-matched singers with impressive credentials offered contrasting tone and register, notwithstanding Sofia Fomina’s cold (announced by Burnside) that blurred her usually bright timbre but left intact her interpretative focus. Together with Oleksiy Palchykov’s clarion tenor and Rodion Pogossov’s generous baritone they breathed life into Romantic and Symbolist texts – an indulgence of dreams, tormented love, artfully woven into a group of Iberian-themed songs.

Nowhere was this more colourful than in Glazunov’s Spanish Song, its strumming rhythms crisply outlined by Burnside and the farewell to Malaga sung with dramatic intensity by Pogossov whose stentorian tones filled the hall. From Shostakovich’s Opus 100 Spanish Song collection, he brought richness of tone to the soulful ‘Farewell, Granada!’ and tenderness to the simple folk contours of ‘The dark-eyed girl’, songs far-less bleak than the two from his Opus 79 group From Jewish Folk Poetry. Written in 1948, it’s a mostly brooding collection of eleven numbers – solos, duets and trios – and enabled Fomina and Palchykov an expressive outlet (one remonstrating, the other placating) in ‘Before a long separation’.

From romance to symbolism, the second half showcased striking differences in the work of Medtner and Rachmaninov, near-contemporaries and friends. They may have absorbed one another’s melodic and harmonic mannerisms, but it was Medtner’s formidable piano-writing which left an indelible impression. The urgency of The Wagon of Life (with reminiscences of Schubert’s Erlkönig) was brilliantly conveyed by Palchykov, so too the limpid beauty and transparent line of Rachmaninov’s The Migrant Wind. To his Opus 38 Romances, Fomina brought great sensitivity, exploring a range of colours; whether imploring (At night in my garden), radiant (Daisies) or playful (The Pied Piper) is tailor-made for Rachmaninov’s delicate, impressionistic and poetic strivings. Burnside was an attentive partner and thanks to him for this treasure-trove of Russian delights. It’s the tip of an iceberg and long may it continue.