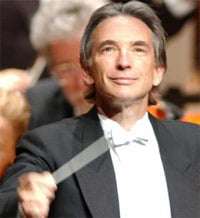 During the summer of 1978 I was living in Philadelphia where one perk was the free concerts at Robin Hood Dell. The atmosphere was relaxed for both listeners and players – and the orchestra sounded fabulous, even though it often seemed to be leaning back and occasionally running on auto-pilot. The concert series was nearly disrupted by a municipal workers’ strike, and one of the most anticipated concerts of the season – Mahler’s Second Symphony conducted by Michael Tilson Thomas – faced possible cancellation. With only a half-hour rehearsal with the chorus, the concert went ahead, every member of the orchestra sitting up straight with all eyes on Tilson Thomas – and the performance was the most supercharged of the season.

Michael Tilson Thomas is nearing the end of his fifteenth season as music director of the San Francisco Symphony. He inherited a revived, disciplined, and technically refined orchestra from Herbert Blomstedt and has built well on that foundation. Fifteen years ago, the orchestra’s string timbre was on the lean and mean side; Tilson Thomas has cultivated one of the warmest string sounds in the Western Hemisphere, but these players deliver a bright, incisive sound when they need to. The woodwinds also and brass also have a warmer sound than one is accustomed to hearing from an American orchestra these days, even given the fact that many music directors of American orchestras have been actively reining in overly bright brass sound that was in vogue a couple of decades ago. For the current performance, Tilson Thomas deployed antiphonal violins, cellos and basses on the left, which did a great deal to illuminate the sometimes startling effect of Mahler’s scoring.

Tilson Thomas recorded Mahler’s ‘Resurrection’ Symphony with the San Francisco Symphony during the 2003-04 season, and this New York performance bore some strong similarities, but also more than enough differences to indicate that the conductor has again re-thought his approach to the work. As a whole, the first movement had the same balance of inexorable forward momentum in both the march themes and the second theme, but a number of smaller countermelodies and ideas emerged from the background to often-startling effect. The big rallentando at the false coda seemed a bit overdone, but Tilson Thomas’s choice of dynamics and somewhat faster tempo following the climax pushed the music forward, though the movement’s final measures were taken too slowly.

The second movement was by far more satisfying, with the anguished and sometimes grotesque outbursts seeming to rise from the movement’s elegant underpinnings with a proper measure of ferocity. Tilson Thomas chose a third-movement tempo that was too hard-pressed, leaving the music a degree too manic and blunting the hairpin-turn contrasts. ‘Urlicht’ was played with effective longing and mystery, Katarina Karnéus conveying the text with conviction, but her edgy vibrato undercut the mood.

Tilson Thomas brought order to the work’s outsize finale, but not without a few curious interpretative choices – for example, the nearly legato trumpet phrasing in the crescendo to the work’s first climax, or the breathless tempo in the metrically-shifting lead-up to the second climax that seems at odds with the composer’s instructions. The interlude before the choral entrance was surprisingly impressive and had a more improvisatory atmosphere than I have heard in this music in a long time. Laura Claycomb emerged with radiant effect from the Westminster Concert Choir’s opening verse of Klopstock’s “Resurrection” ode, and Karnéus’s powerful mezzo was far more suited to this music than ‘Urlicht’. To his credit, Tilson Thomas opted not to use Carnegie Hall’s dreadful electronic organ in the majestic final music, which the orchestra carried off with enormous power.

I’m not completely sold on Tilson Thomas’s current approach to Mahler’s Second Symphony, but he makes his arguments eloquently with an orchestra that has achieved an outstanding, world-class level of artistry.