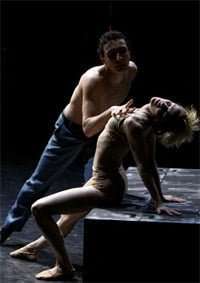 Streetcar is a resounding success both for Scottish Ballet and also, personally, for their outgoing Dirtector Ashley Page, who has done so much for this company, bringing it back from the brink and revitalising it with a clear and dynamic artistic policy. He leaves it in a far stronger state than when he arrived, and can be justifiably proud for his considerable achievements. A choreographer himself, Page nevertheless handed over his last creation as director to others, and was inspired to engineer a collaboration between the experienced and successful theatre director Nancy Meckler, artistic director of Shared Experience, and the promising young choreographer Annabelle Lopez Ochoa. The fusion of both their talents leads to a work of dramatic intensity and structure rare in dance where choreographers often fall short in the separate skill of dramaturgy. Here Meckler’s sense of narrative shapes the framework within which Ochoa’s movement exists; it is a happy combination indeed.

For this collaboration, they chose Tennessee Williams’s A Streetcar named Desire, and it is with great pleasure to report that their efforts are mightily impressive, relating the narrative of this wordy play with both clarity and concision. They have chosen to provide Blanche DuBois’s back-story for the simple reason that, as Ochoa states “There is no past tense in dance”. So Blanche’s husband Alan is seen courting and marrying her only to discover himself in love with another man – Blanche’s discovery of this leads him to shoot himself the shock of which precipitates her decline into promiscuity, alcoholism and madness. It is a bold decision which makes absolute narrative sense, and the creative pair’s clear story-telling here is spot-on – scenes are short but telling, each one pointing to where the play itself starts. 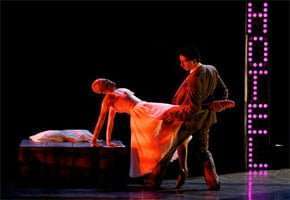 Meckler also inserts episodes which are hinted at in the play: Blanche and her sister at a night-club, or the Kowalskis at a bowling evening. This too is brave, but allows the ballet to ebb and flow and gives the work a dramatic pulse – it makes the episodes of real dramatic intensity all the more telling. The movement quality of Ochoa’s choreography has much of interest – she has an eye for the telling gesture and is unafraid to use stillness, often one of the most powerful statements to be made by a choreographer, yet equally as often un- or under-used. The ‘high’ points of the ballet lie in three pas de deux: the first between Alan and his lover, the second the love-making between Stanley and Stella and the third Stanley’s rape of Blanche. Here Ochoa provides intense edgy movement, the last two using some of the same steps yet, given what is happening, to radically different effect. Additionally, the un-named dancers of the company provide a sort of chorus, often present acting as one, from which one may peel away only to return – it is highly effective, and contributes to the slick and professional nature of this production.

Niki Turner’s stark scaffolding set frames the action and it is a brilliant concept to use basic blocks to construct props – a bed, table and chairs, a radio. This allows for rapid change of scene but also contributes the dream-like, slightly surreal quality to the work which mirrors Blanche’s state of mind. Her costumes are sufficiently ‘period’ to evoke time and place and Tim Mitchell’s virtuosic lighting adds much to the tense, dense atmosphere of the work. Peter Salem has provided a highly atmospheric score of live players, amplified and mixed with recorded sound which covers a range of musical styles, from the Old World waltz of Blanche and Alan’s wedding to the period swing of the bowling competition. Salem contributes much to the tension with dark scoring, the rape scene, particularly, benefits from a tense sound quality.

The company dances Streetcar with élan, an ensemble clearly relishing its challenges both technical and dramatic. Claire Robertson delivered a brittle, flighty Blanche, truly a moth flitting in the destructive flame of Erik Cavallari’s brutishly attractive Stanley – both are experienced dramatic dancers whose portrayals were full of nuance and detail. Sophie Laplane was a besotted Stella, clearly intoxicated with the heady masculinity of her violent husband and I was impressed by the coltish quality of Andrew Peasgood’s Alan, the confusion provoked by the realisation of his attraction to another man tellingly communicated, his sad shade then stalking the stage in Blanche’s troubled imagination.

Streetcar is an achievement; a bold telling of a well-known play, which provides intelligent, adult entertainment and is a work of which the company can be proud for many years to come.