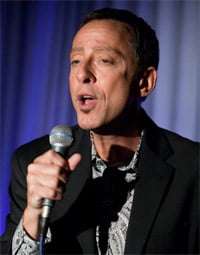 Just over a year ago Harold Sanditen made his first appearance at The Pheasantry, Chelsea’s cabaret spot. He had already played the old and now-defunct Pizza on the Park. Since last year he has toured his previous show (Thoughts ’Round Midnight) and issued a compact disc Taking Flight). This extremely talented singer has taken off in all directions. Having worked for other people in putting on their shows, he decided to devote himself to full-time performing. He’s been learning on the road and in the process has acquired a wide range of material rather than just doing the regular cabaret repertoire. You probably won’t ever hear him sing ‘Guess who I saw today?’.

Instead he gathers up material and fashions it into a satisfactory whole, generally with some kind of thematic thread. For his current appearances at The Pheasantry he has chosen the Blues as his theme, or rather, as the title says, Shades of Blue. Not only is Sanditen happy to sing the blues, as we know them from their African-American source, and other related songs, but he also offers us definitions and usages of ‘blue’. Examples: out of the blue, blue stocking, blue cheese, blue-collar-worker, and its direct opposite, someone with blue blood. There’s an Oxford blue, a Tory blue, a blue film, a blue joke, the blue whale and a bluebird of happiness. Earth is known as the ‘blue planet’ on account of all its water, which is not blue anyway, just a reflection of ‘my blue heaven’, although the sky is not really blue either. There’s no end to the possibilities and Sanditen amusingly garnishes his show with umpteen examples until he’s, well, blue in the face.

Musically his programme is a treat, beginning with, what else, ‘The birth of the blues’, the De Sylva, Brown and Henderson classic, which explains where it all came from. Miles Davis’s ‘All blues’ perpetuates the feeling and Billie Holiday’s ‘God bless the child’ really sets the seal on it, saying it all in one of the most moving of blues numbers. However, our host does not dwell too long on the sad side of the blues, for there’s humour a-plenty in the shape of Dave Frishberg’s ‘I’m hip’, made famous by Blossom Dearie. More humour comes in the shape of ‘Blues my naughty sweetie gives to me’, a 1920s’ number that certainly deserves resurrecting. Neil Sedaka is always bouncily jolly even when singing his ‘Breaking up is hard to do’. Here Sanditen gives it a real going-over in a kind of lowdown torch song rendition that brings real gravitas to the number. The opening set also includes fine songs such as Bart Howard’s ‘Fly me to the moon’ (the blue moon, perhaps?) in tribute to Ol’ Blues Eyes, Mr Sinatra, plus numbers by Dizzie Gillespie, Leon Russell and Alex Webb, and not forgetting that timeless Schwartz & Dietz number, ‘You and the night and the music’ – a blue mood that’s just lovely.

‘When Sunny gets blue’ by Jack Sega and Marvin Fisher I recall being sung by Miss Streisand. Here Sanditen gives it a plangent edge that is simply perfect. Stevie Nicks’s ‘Landslide’ takes us back to the depths of human emotion as do the Jobim numbers, ‘No more blues’ and ‘Waters of March’, the latter about the floods in Brazil that not only do damage but also bring growth in their wake. Billy Joel’s ‘He’s got a way’ has Harold believing it’s a song that his own dog would sing to him. New words to Noël Coward’s ‘The stately homes of England’ take us back to the funny side again and the evening ends with some rip-roaring Irving Berlin numbers, ‘Blue skies’ and ‘Shakin’ the blues away’. Altogether an admirably brave programme and one that is very satisfying. Michael Roulston on piano has made some splendid arrangements and his musicians are ace. Director Barry Kleinbort keeps everybody in check. You won’t feel blue after Harold Sanditen’s performance: it’s certainly uplifting and in these strange times that’s more than welcome.