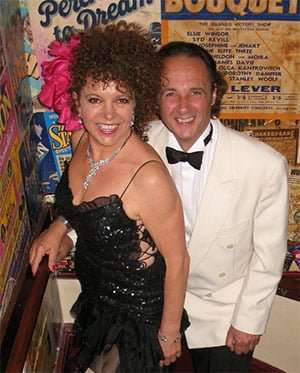 At the start of the evening, Carolyn Allen, one half of Opera Tottie (the other is Paul Smith), promises “fun and frivolity”, which is delightfully fulfilled, prompting gales of laughter throughout an irreverently humorous performance. Allen and Young are vastly experienced artists. She made her West End debut several years ago in Kismet, appeared in such shows as Les Misérables and The Pirates of Penzance, and made a vivid impression in Only Fools and Horses as Vonny, the stripper and snake charmer. Her voice has remarkable range, from soaring soprano to guttural earthiness. Smith has been MD for musicals at the National Theatre and Regent’s Park Open Air Theatre, and has toured the world accompanying Pam Ayres, Janie Dee and the inimitable Dame Hilda Bracket, whose memory is sometimes evoked during Allen and Smith’s satirical act, which features Gilbert & Sullivan as well as popular songs and operatic arias.

After opening with some Gershwin and Berlin, Allen announces that two themes will be men and champagne, and she combines these enthusiasms with two Lerner & Loewe songs from Gigi. ‘The night they invented champagne’ is conventional enough, but this may be the first time that Maurice Chevalier’s signature song has been re-fashioned as “Thank heaven for little boys”. Allen continues with a number co-written by her distant relative, Noël Gay, ‘Only a glass of champagne’, with lyrics by Arthur Wimperis, the story of an innocent led astray by alcohol, introduced by Evelyn Laye in the wartime revue Lights Up and still amusingly risqué as delivered by Allen. It’s delightful to hear another fondly remembered item, this time from the post-war years, David Climie and John Pritchett’s ‘Siren Song’, established by Joan Sims during her 1954 variety show, Intimacy at 8.30.

One of the first of several operatic parodies is a hymn to liposuction to the melody of ‘I am the very model of a modern major general’ from The Pirates of Penzance. The new lyrics are by David Humphries. Michael Hobbs also contributes material, but the majority of the new lines are by Fraser Grant, who is an opera and theatre director as well as a lyricist and translator. Among other favourite arias transformed by Allen and her collaborators are ‘Vilja’ from Lehár’s The Merry Widow, which becomes a hymn to the cooking skills of ‘Delia’ (including her “crunchy Crème brûlée”), plus a raunchy adaptation of Romberg’s ‘Stout-hearted men’ and a six-minute version of Carmen in which the heroine becomes a footballer’s wife.

I particularly liked Allen’s skewering of mobile-phone users (all of them saying “I’m on the train”). To Verdi’s ‘La donna è mobile’ (from Rigoletto), Allen sings “This is my mobile, I bought it yesterday”. But one must resist the temptation to give away too many of the witty and surprising rhymes which stud this utterly diverting programme.