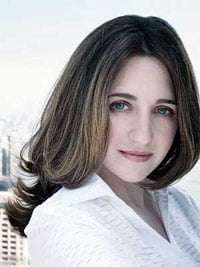 Simone Dinnerstein’s opening chord – in the first of the Impromptus – was expansive, strong and authoritative. This was not an alarum to divert some Viennese salon into silence, nor a wakening call on some Hungarian estate. This particular chord unequivocally proclaimed Schubert’s presence. She then treated us to as full and rich a delineation of Schubert’s genius as I would wish for. A man of robust but vulnerable sensibility stood before us. His emotion billowed through the sweep of his long phrases, the subtle hesitations of his bar-lines and the triumphant clarity with which he gave his musical blocks their shape.

Dinnerstein had found a real man. Her performance was alive with his reality, whether declaring intentions of seriousness, cavorting skittishly in the swirl of a captivating study (with much more charm than usual), being wistful and nostalgic by a stream or dancing hectically in the square.

Her Bach was better known to me, through her extraordinary Goldberg Variations, heard in this Hall 18 months ago. The chosen French Suite was stylishly phrased and light-spirited, the rhythms and characters of the different dance modes presented nicely, swiftly and precisely, though giving the central ‘Sarabande’ its due seriousness.

Phillip Lasser’s ‘Bach Variations’ was arresting and quite beautiful. Even more, the music is memorable – resembling a collection of essays written in honour of a revered master. The Bach presence continues, re-freshened, yet acknowledging the master supreme. Dinnerstein brought her remarkable gifts of sweeping dexterity and emotion to bear on Lasser’s mercurial survey, ranging from adroit counterpoint to jazz, from playful to poignant.

Lastly, and marvellously, came Beethoven’s final sonata. The life, the style, the size and the out-reaching emotional exploration were all there, expressed with burning, passionate directness and awesome strength. The sternness of the first movement had Herculean power and authority with majestic and awe-inspiring drive. The second was luminous and sublime – ineffable. Dinnerstein’s success here was due as much to the power in her wrists and the steel in her fingers as to the rare sensibility of recognising the treasure she has found. She is a true musician