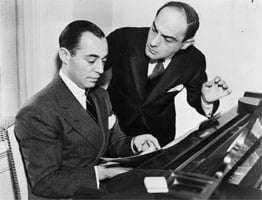 Composer Richard Rodgers met lyricist Lorenz Hart in 1919. Rodgers was sixteen, Hart twenty-three. It was a match, if not a marriage, made in heaven. They worked so easily together despite their very different temperaments. Rodgers, tall, dark, slim, handsome and heterosexual had discipline, whereas Hart, short, fat, unattractive and gay, was something of a wreck. His drinking finally finished his relationship with Rodgers but, from when they first met until Hart died of pneumonia in 1943 aged 48, they produced some of the most enduring popular songs ever written, the basis of the Great American Songbook.

Richard Rodgers found it easy to write a good melody and Lorenz Hart knew about constructing verse – he was generally known as the “Poet of Broadway”. Together they could both write at the drop of a pin or on a producer’s whim. When impresario Florenz Ziegfeld told them he needed a not-too-highbrow song during a rehearsal for “Simple Simon” (1930) they went away and came back an hour later with ‘Ten Cents a Dance’, which has become a classic. They were professional to their fingertips, their catalogue of hits is a remarkable one, and, while many of their theatre shows have disappeared, the number of their songs that we still hear and play is quite staggering.

David Benedict’s script for Cadogan Hall’s tribute to Rodgers and Hart provides a sympathetic biographical trip through their working lives whilst the songs sung by Maria Friedman, Mary Carewe, Graham Bickley, Tim Howar, with narration by Simon Green, prove, if proof were needed, what a successful musical partnership they were. Just begin to list some of the songs they wrote and no more need be said: ‘Manhattan’, ‘Falling in Love with Love’, ‘Johnny One Note’, ‘This Can’t Be love’, ‘I wish I Were in Love Again’, ‘My Romance’, ‘There’s a Small Hotel’, ‘The Lady is a Tramp’, ‘Bewitched, Bothered and Bewildered’, ‘Mountain Greenery’, ‘My Funny Valentine’ and ‘Where or When’… 800 songs and over sixty shows and films including “On Your Toes”, “The Boys from Syracuse”, “Higher and Higher”, “Pal Joey” and “By Jupiter”.

It is amazing to think that ‘Manhattan’, Rodgers and Hart’s paean to New York City, was written as long ago as 1922 for an unproduced show called “Winkle Town”. It had to wait another three years before it emerged in public in the pair’s first hit show, “The Garrick Gaieties”. Another song went through four sets of lyrics before emerging finally as ‘Blue Moon’. It was originally written as ‘Prayer’ for Jean Harlow to sing in the MGM movie “Hollywood Party”, but neither the actress nor the song appeared in the film. It received a new lyric, as the title song for the Clark Gable film “Manhattan Melodrama” but was cut-out of the picture, given another new lyric and appeared in the film as ‘The Bad in Every Man’. Then it was again written as ‘Blue Moon’. It made no difference at all to Rodgers, whose tune remained intact but, by the time ‘Blue Moon’ appeared in its final form, Hart hated it. But, it still became one of the team’s most unforgettable numbers.

The selection of songs for “Sing for Your Supper” includes many of the most well-known and beloved from Rodgers and Hart’s output. Many of their shows may no longer be remembered but the songs certainly are. ‘Manhattan’ has had a life of its own and Tim Howar and Mary Carewe do it real justice. It is a love duet but with humour, much of which comes through the clever rhymes of Hart: “We’ll go to Greenwich / Where modern men itch / To be free”. Tim Howar sings ‘Blue Moon’ as a torch song. It must be the plangency of both words and music that finally gave the song its success: “Blue Moon, / You saw me standing alone, / Without a dream in my heart, / Without a love of my own.”

‘Mountain Greenery’ is another ‘list’-type song similar in vein to ‘Manhattan’, a love song with humour which Maria Friedman and Simon Green execute with the requisite pizzazz. That is the quality that most of Rodgers and Hart’s work has – the songs simply ooze with panache that make them just so wonderful to perform. In a song like ‘Johnny One Note’ the singer can really let rip and Mary Carewe does just that and for a talented artist such as she is, the song is an absolute gift. Her version of ‘He Was Too Good to Me’ just eats your heart out. Similarly, in a medley of ‘Ten Cents a Dance’ and ‘My Romance’, Maria Friedman gets to the essence of both the melodies and the lyrics. In the first, the tune is slow as if the woman in question is dead on her feet while the lyrics emphasise the fact – “Ten cents a dance / That’s what they pay me; / Gosh, how they weigh me down!”. ‘My Romance’ is simplicity itself but sad, sad, sad: “My romance / Doesn’t have to have a moon in the sky. / My romance / Doesn’t need a blue lagoon standing by…”, ending with “My romance / Doesn’t need a thing but you.”

Mary Carewe and Graham Bickley essay the comic duet of ‘What Can You Do With a Man?’ from “The Boys from Syracuse” with an apt touch of parody, while Simon Green changes the mood to one of regret in ‘Falling in Love With Love’. It is amazing how many moods the writers could conjure up, such as the state of loneliness depicted in ‘It Never Entered My Mind’, which Mary Carewe evokes with great passion. Often the solitary songs were a reflection of Hart’s own lonely state of never being able to find a permanent partner. On the other hand, as Maria Friedman demonstrates in ‘To Keep My Love Alive’ (Hart’s last lyric, from the revised “A Connecticut Yankee”) there is a comic side to being on one’s own in this tale of how one woman dispatched her husbands to the hereafter.

The band, directed by David Shrubsole, provides the perfect musical accompaniment in smart arrangements. Accoustically, Cadogan Hall is not ideal for this material and it takes some time to get used to the rather boomy sound. For some reason the second half of the programme sounded better and as the cast head towards the end of the evening with great versions of ‘I Wish I Were in Love Again’, ‘Wait Till You See Her’, ‘My Funny Valentine’, ‘I Could Write a Book’, ‘Bewitched, Bothered and Bewildered’ and ‘The Lady is a Tramp’, the voices and the acoustics seem to get better and better. A close harmony version of ‘Where or When’ finishes the show on a note of sheer perfection.