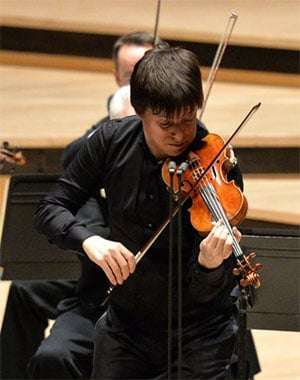 Not quite 90 not out, for Sir Neville Marriner’s birthday is on the 15th. I have no wish to be a party-pooper but it was a shame that in these overture-starved days that conductor and orchestra couldn’t have had a ‘solo’ spot to begin this celebratory concert. So, we went straight into something concertante. Charming and inventive though the Saint-Saëns is, it was no replacement for the originally planned The Lark Ascending, one of Vaughan Williams’s most-sublime masterpieces. Nevertheless, Joshua Bell (now the Academy’s music director) played this morceau vividly if with some prickly tone, and a little more spontaneity would have been welcome. Responding to Bell’s bow, his Academy colleagues accompanied with panache, although the smaller ‘period’ timpani played by Adrian Bending, who certainly rattled them, seemed a luxury for just ten minutes, and then made curious when Tristan Fry took over this role and used bigger-brother instruments, even in the Mozart.

It was a nice idea to engage Sir Neville’s Academy successors for the occasion, the other being Murray Perahia (Principal Guest Conductor). Finally Sir Neville made an appearance, hale and hearty, and conducting vigorously and to the point (as captured in the photographs taken at the concert). 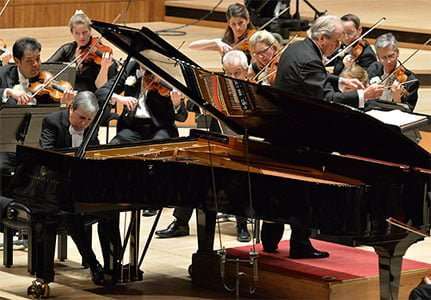 Mozart’s D minor Piano Concerto (which Marriner and the ASMF recorded recently with Hai-Kyung Suh, along with several other such works for Deutsche Grammophon’s Korean wing, awaiting release) was dark and brooding in the first movement, stylishly played by the ASMF for one of Marriner’s favourite pieces. Perahia was on top form, cultured and refined, scintillating where needed but tellingly dynamic, his meaningful light and shade matched by the orchestra. The cadenza was a classic, but who wrote it? Not credited in the programme (which had it been, hassle would have been avoided for the enquiring mind), it certainly wasn’t the ‘usual’ one by Beethoven. In fact, following investigation, both this cadenza and the one in the finale were by Perahia. (Brahms, Hummel and Clara Schumann, and others, also wrote a K466 first-movement cadenza.) The central ‘Romanza’ enjoyed a simple yet soulful eloquence from Perahia, who tastefully embellished the line from time to time, the woodwind-playing was poetic, and the agitated middle section arrived organically. This was a performance of personality and insight; nothing was made obvious but there was much illumination.

Enigma Variations was the perfect choice to end the evening, an imperishable masterpiece. Sir Neville, from Lincolnshire Lad to Knight of the Realm, from orchestral violinist (in the LSO) to international conductor (he recently had a two-week stint with the NHK Symphony in Tokyo), and the founder of the Academy of St Martin in the Fields in the late-1950s, developing it from a small Baroque-music-inclined ensemble to utilising, when needed, much larger forces playing diverse repertoire. Together they have been prolific in the recording studio. 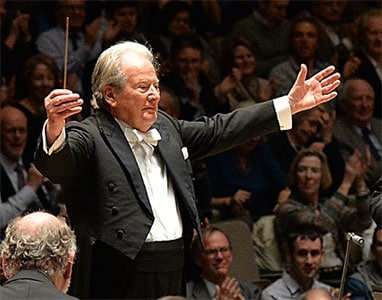 Enigma Variations, open to infinite interpretation, received a flowing and affectionate outing, with the numerous ‘old’ boys and girls whom we now associate with other positions (BBCSO, Philharmonia, LSO) coming together to recreate an ASMF of yesteryear (Kenneth Sillito leading): essential, seasoned and focussed, and palpably enthused by this opportunity. It seemed that Marriner’s way with the score was not only to keep it on the move but that the earlier Variations should all lead to ‘Nimrod’, for once not a memorial but a glowing outpouring about the great things of life, after which there was a well-timed ‘pause for thought’, and then the subsequent Variations were routed to the final one, Elgar’s self-portrait, given with vitality and appropriate pomp, Marriner broadening the music to great effect at the close, the RFH organ (manned by Stephen Disley) adding fibre but without coarseness or excessive volume (and this was not an event to even think about Elgar’s ad lib allowance for this instrument); indeed, three of the hallmarks of this rendition were excellent balance, clarity of detail and unobtrusive characterisation; ‘Dorabella’ had less of a stammer than usual, an affliction she’d surely be delighted to lose.

Memorable people-offerings included Tristan Fry’s terrific timpani-playing (so transparent, sophisticated, virtuosic and varied), luminous viola solos from Robert Smissen, fluent cello ones from Stephen Orton, and a magical clarinet contribution from Andrew Marriner, Sir Neville’s son. We weren’t done. Two encores followed, the slow movement of Mendelssohn’s ‘Reformation’ Symphony (No.5), expressively turned, and Irish Tune from County Derry or Londonderry Air or Danny Boy – you choose – presumably in one of Percy Grainger’s arrangements, music easy to make mawkish but here ennobled. Sir Neville addressed a few words to us, an economical model, and we sang him “Happy Birthday”, collectively opting for “dear Neville” rather than trying to squeeze the “Sir” bit in.

This very happy and inspiring concert was filmed (could have done without the distracting jib to the right of the orchestra though and the moving-about cameraman on the left), and sound-recorded for Classic FM, to be broadcast this Friday, April 4, at 20-hundred hours. As it is, Sir Neville Marriner has concert and studio dates residing in several future diaries: one sends him thanks – “birthday greetings, bottle of wine” – and also the Best of British in fulfilling them.