Well established now among contemporary music festivals, Sounds New enjoys an enviable setting within the environs of Canterbury – the present concert being located in Augustine Hall, sporting a spacious though finely detailed acoustic which is part of the university complex and the ideal venue for a rare UK visit by Århus Sinfonietta with its director Søren K. Hansen.

While Arvo Pärt is the visiting composer at this year’s Baltic themed festival, the British premiere of a work by Per Nørgård promised to be a highpoint. Completed four years ago, Momentum is the Danish composer’s second concerto for cello: while the first, Between, written two decades earlier reflected the emotional tensions of an idiom beholden to the volatile art of the Swiss schizophrenic Adolf Wölfli, Momentum embodies the renewed classicism and expressive economy evident in Nørgård’s recent string quartets and the Seventh Symphony. Playing for just under 20 minutes, its four movements constitute a Classical sequence in which the first, ‘Monologue’, elaborates a lively process of development and reprise from the initial writing for cello – followed by a second movement, ‘Together’, which is a romanza the more affecting for its restraint. The third movement, ‘Multiplicity’, is a brief but intricate scherzo whose lithe energy carries over into the finale, ’Infinity’, its rhythmic robustness not precluding a modicum of pensiveness en route to the deftly understated close. 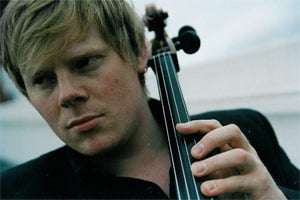 Momentum was given a committed and responsive performance by Jakob Kullberg, for whom the piece was written and to whom it is dedicated – making light of the numerous technical demands while evincing an unmistakable pleasure in the ever resourceful solo writing and its interplay with an ensemble deployed with a transparency also to be found in the composer’s other recent concertante works. An enthusiastic response saw Kullberg return for a brief (one minute!) solo piece, Trip Trip, in which the cello is held as though a guitar and strummed accordingly. A piquant encore to a main work which makes one anticipate Nørgård’s future creativity – not least an Eighth Symphony promised in time for his eightieth birthday next year.

The first half of this concert had opened with two contrasting pieces by younger though hardly less established composers. Taking inspiration from a short story by Karen Blixen, The Monkey finds Niels Marthinsen reflecting the narrative’s truly Gothic sense of foreboding in music of highly translucent textures and a highly wrought harmonic density. Very different in every sense, Bent Sørensen’s Deserted Churchyards evokes such sites along the coast of Northern Jutland with an austerity that takes on a more ominous import as the music intensifies over its eventful course. A similar level of contrast was evident in the two pieces that concluded the second half. Praesens has Simon Steen-Andersen drawing on elements of minimalism in a piece whose sense of forward motion is arrested by the very circularity of its motion – a take on (over?)-tried and -tested procedures put to distinctive use. Conversely, Tonkraftwerk is Thomas Agerfeldt Olesen’s characterful evocation of the mechanistic whose distinction between amusing and serious is transcended in music whose virtuosity was met head on.

Before these two pieces, the concert featured a brace of works that are among the dozen that made it through to the shortlist (out of 464 entries) of the International Composer Pyramid which is currently taking place in France and the UK, and from which an eventual winner will be chosen. Of these, Hugo Ribeiro’s Diurne: alter ego unfolds from its aggressively rhythmic initial phase towards more temperate though hardly less intense writing in which the initial impetus seldom seems far beneath the surface. With Smash and Grab, Benjamin Oliver similarly starts out from a state of violent activity, yet here the progress is more discursive as abstracted drums ‘n’ bass patterns impinge on the discourse in varied and intriguing ways.

Taken out of context, it is impossible to assess the merits of these pieces within the ICP shortlist as a whole. The best of luck to both composers, who could hardly have been other than delighted by the fluency and conviction with how their music was realised. Indeed, the whole programme was a fitting showcase to the all-round excellence of the Århus Sinfonietta.