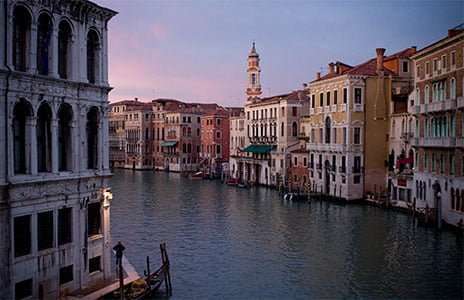 Venice means many things to many people – a once proud, independent state, a trading and cultural entrepôt marrying east and west, the canals, gondolieri, a place of choleric, heady passion – as we are currently being reminded with ENO’s production of Britten’s Death in Venice – and, for not a few, perhaps the most beautiful city in the world. The focus in this concert however was on something rather more optimistic and creative, namely the musical influence of “La Serenissima”’s Renaissance period.

There was no obvious Venetian link with the Purcell pieces or that by Carter Callison, this and the Giovanni Gabrieli works making a brass-music surround to Hear my Prayer. Callison is studying at the Royal Academy of Music. The composition played here takes its inspiration from the philosophical notion of the ‘music of the spheres’. Eight members of the RAM’s Brass Ensemble brought a requisite sense of space and unworldly sonority to the music’s slow progression of chords, which could be compared to those of Messiaen’s Et exspecto resurrectionem mortuorum or the ‘chorale’ in his Couleurs de la Cité Céleste, though they are more diatonic in character.

For its first appearance in the concert, the Choir of Clare College was spread out in a horseshoe around the aisles and in front of the altar to sing, from memory, Purcell’s Hear my Prayer. Although this cruelly exposed each and every line of the music’s extraordinary eight-part texture, none of the singers was found wanting. A dramatic crescendo was properly sustained up to the climax but the spatial separation of the singers resulted in an attenuated impact at that point. The Choir sang as an integrated group for its remaining music, though set apart as two cori spezzati in Schütz’s Magnificat and in G. Gabrieli’s In ecclesiis. Soloists came forward in the latter and in the two other works by Purcell. In Jehova, quam multi sunt hostes mei the tone was insufficiently anxious and it sounded as though it might have been the anthem at a service of Evensong. There was a greater sense of drama in Music for the Funeral of Queen Mary, not only in the choral movements (in which the undergraduate soloists proved very capable and sensitive), but also in the partial re-enactment of the Queen’s procession with the contribution of drum-beats to the ‘Funeral March’ and closing ‘Canzona’. 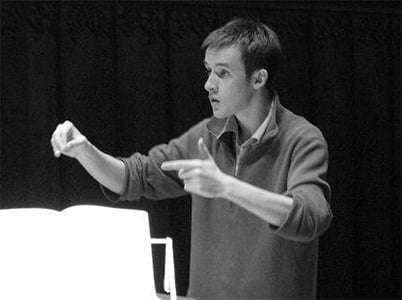 There was greater vigour as well as deft musical characterisation from the Choir in the lively counterpoint of Schütz’s Magnificat that was passed back and forth between the divided choristers without hiccup – an influence which Schütz had learnt in Venice and passed on to J. S. Bach, most notably in the latter’s Motets. Darker tones were carried across the longer lines of Schütz’s German setting of the Nunc Dimittis. Choir and brass came together for a searing performance of G. Gabrieli’s In ecclesiis – initially dainty, this rose to a splendour to match the domes of San Marco.

The Brass Ensemble was no less adept. There was a ceremonial grandeur in G. Gabrieli’s Canzona duodecimi toni as the music proceeded antiphonally between the two groups of brass, and with marvellous dexterity from the two trumpet soloists. A quartet of players (or rather two pairs) performed Andrea Gabrieli’s Ricercar and Giovanni’s Canzona per sonare no less rigorously, carefully observing the quieter strains of imitative counterpoint. Elgar Howarth’s Venice – A Portrait may be thought of as a musical postcard or an advertisement by the Venice tourist board, with its text proclaiming lists of prominent artists and musicians connected to the city, brief biographies of Giovanni Gabrieli and his uncle, Andrea, and citing that Stravinsky is buried there. The listed soloists took the difficult, far-flung parts imparting what musical sense they could to the largely non-prose words. These sections were surrounded by brass interludes beginning with quiet amorphous harmonies – perhaps representing the Lagoon in twilit mists – out of which a solemn fanfare emerges. The references to the Gabrielis cued two interpolated canzonas, which were inspired by their style but composed by Howarth with a modern twist, rather as Stravinsky might have done in his re-compositions of older works – his Monumentum pro Gesualdo would be a parallel.

Altogether the performers in this work and all the others in the programme made a convincing case for the pervading and continuing influence of Venice in European musical culture.