When Rudolf Buchbinder last appeared in New York, two years ago, it also was with Staatskapelle Dresden and in a Beethoven concerto (No.1), conducted by Fabio Luisi. The Italian conductor had been scheduled to conduct this tour as well, but resigned his post with the orchestra last February. Playing Beethoven’s sonata and concerto cycles this year, Buchbinder’s immersion into this music was obvious from the very beginning. The opening statement of the piano was finely nuanced, presaging Buchbinder’s approach to the rest of the concerto. For the orchestra’s response, Beethoven’s genial idea of shifting to B major, Daniel Harding seemed to aim for a mysterious, ephemeral sound, but it ended up very tentative instead. Once past this hurdle though, the orchestra played with poise and style, although not so much in a Beethovenian, but rather more Schubertian mode.

This is arguably the Beethoven’s most lyrical piano concerto, and Buchbinder certainly emphasized this aspect. All throughout one had the impression that he was in charge of even the orchestral accompaniment, and the conductor carefully carried out his wishes and ideas. It was one of those evenings when one gets the distinct impression that a major artist is in the house, and it is to Harding’s credit that he let himself get drawn into his realm. The first movement was the most free-flowing of the three, with very deliberate tempo modifications for the second theme. The cadenza was not only flawlessly executed, but it sounded as if improvised, a rare achievement. The Adagio was a dialogue of rough statements by the orchestra and lyrical responses by the piano, while the finale had verve as well as a fine sense of the inner dynamism of phrases. In an age where youth seems to be sought after for its energy, even in classical music, it was important to be reminded that musical insight does not come overnight. We need to honor and cherish artists of Buchbinder’s stature and maturity for their lifetime of study and contemplation of the repertoire. 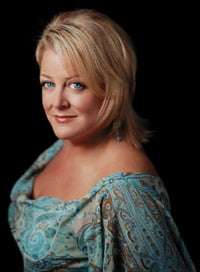 Although “Ah! perfido” deals with the subject of a jilted woman, it remains a concert aria. Deborah Voigt went a step further and turned it into verismo, complete with hand-wringing and dramatic poses. Vocally she was at her best in the loudest outbursts, easily soaring over the orchestra, while her low register lacked projection, and her soft singing went slightly flat. Hers is very one-dimensional voice which can get louder and softer, but it is devoid of color and character, which was especially regrettable in the sections which call for warmth. Harding did a fine job of staying with her when she occasionally rushed some beats.

The Seventh Symphony received a young man’s approach – respectably executed, even achieving true pianissimos in this problematic hall, but without profound insights. No repeats were taken, and tempos were generally brisk, the finale so fast that articulation suffered, and there was little room to build-up more excitement. What was most disturbing, however, were internal balances. Single woodwind and horns were pitted against a string section of 60 players. We know from Beethoven’s letters that he preferred to have the winds doubled with orchestras one-third this size to do justice to interplays between the different groups. While the wind solos could be heard in soft sections, they disappeared in anything above mezzo-forte. The sound in the big moments was that of a string orchestra with trumpets and timpani, even the horn fanfares at the end of the outer movements were all but drowned out. This could scarcely be what Beethoven expected.