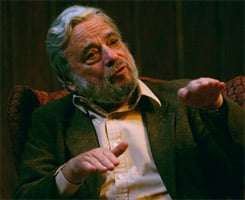 In 1954 the Broadway season had a healthy run of musicals. Leonard Bernstein’s “Wonderful Town” was at the Winter Garden Theatre, with Rosalind Russell and Edie Adams; “Kismet”, Wright & Forrest’s take on the music of Alexander Borodin with Alfred Drake and Doretta Morrow was packing them in at the Ziegfeld; Lotte Lenya and Bea Arthur were in “The Threepenny Opera” at the Theatre de Lys; Jerome Moross’s “The Golden Apple” was at the Phoenix; and Sandy Wilson’s “The Boy Friend” had transferred from London to the Royale in New York, with Julie Andrews and Millicent Martin. Later on that year Jule Styne’s “Peter Pan” followed “Wonderful Town” into the Winter Garden and the year ended with “Fanny”, Harold Rome’s show based on the Pagnol trilogy at the Majestic, and Harold Arlen’s “House of Flowers” at the Alvin.

Probably the biggest hit of 1954 was “The Pajama Game”, Richard Adler and Jerry Ross’s musical-comedy about union strife in a pajama factory in Cedar Rapids, Iowa. It introduced Shirley MacLaine to the world when she danced out of the chorus to take over from an indisposed Carol Haney in the ‘Steam heat’ number. The rest is Hollywood history. The show, which starred John Raitt who went on to make the film of “The Pajama Game” with Doris Day, was the work of Broadway producer Lemuel Ayers who had designed the original “Oklahoma!” and both created and produced “Kiss me, Kate”. Ayers had the rights to a play, “Front porch in Flatbush”, by two Hollywood screenwriters, the brothers Julius J. and Philip G. Epstein, most famous for the screenplay of “Casablanca”.

This was their last play together as Philip had died. Ayers wanted to turn the piece into a musical and asked Frank Loesser (who wrote “Guys and dolls” and, incidentally, was the first choice to write “The Pajama Game”). However, Loesser was busy elsewhere, so Ayers auditioned Stephen Sondheim and asked him to write three songs. Ayers liked the result and Sondheim got the complete job. Renamed “Saturday Night”, the show was to have been Sondheim’s first professional work in the musical theatre. But Lemuel Ayers died suddenly and the project was shelved.

Five years later, following the success of “West Side Story” (Leonard Bernstein and Sondheim) and “Gypsy”, which Jule Styne and Sondheim wrote for Ethel Merman, further interest in “Saturday Night” came from Styne and director Bob Fosse. Auditions began but Sondheim felt he didn’t want to go back to old material and “Saturday Night” was again dropped. To this day it has still not reached Broadway. It did, however, receive its official world premiere in London at the Bridewell Theatre in Fleet Street in 1997, although a concert performance had already been staged a year earlier by students at Birmingham University. Sondheim saw the performance and gave consent for the show to be fully staged. Julius Epstein was planning to revise the book but suffered a stroke just before the start of rehearsals. The songs ‘Delighted, I’m sure’ and ‘Montana Chem’ had not been completed so were dropped from both the Bridewell production and the original cast album (First Night Records CAST CD65). Eventually the Chicago Pegasus Players performed the new songs in 1999 when Sondheim revised his score for the US premiere. It reached off-Broadway the following year, winning a Drama Desk Award for Outstanding Lyrics for the Second Stage Theatre’s production. Primavera’s production at Jermyn Street is the first time that Sondheim’s revised book and score has been performed professionally in the UK.

If it took fifty years and more for Sondheim’s first show to reach the stage, would it have been a success way back in 1954? Looking at the record above of shows playing that year in New York, they were mostly good entertainment for a general public. We are speaking of a time when ‘musical comedy’ was still on the menu. Apart from “The Threepenny Opera” (hardly musical comedy) the shows current then were lightweight pieces designed to let audiences escape the drudgery of a relatively austere post-war period. Remember this was before realism had crept into the Broadway musical, before, in Sondheim’s case, “West Side Story”, “Company”, “Follies”, “Pacific Overtures”, “Sweeney Todd”, “Sunday in the Park with George”, “Into the Woods” and “Assassins”, all of them examples of how Sondheim rewrote the rules for the Broadway musical.

“Saturday Night” may have been written before its time but now it is quite a timely piece. Although set in 1929, the year of the Wall Street Crash, it depicts a time of both optimism and recklessness. The characters, all budding socialites, may not have much money but they do want to enjoy themselves and have a good time. Does that sound familiar now? Little do they know that by the end of the year they will be in an era of depression that will continue through the 1930s. They still have their aspirations, like many another hero/heroine of musical theatre, namely “Sweet Charity”, “Little Me” and “West Side Story”, where there’s gotta be something better than this, on the other side of the tracks, even in America.

For the cast of “Saturday Night” the divide is the Brooklyn Bridge, the rainbow beyond which lies Manhattan, the epitome of high living and the glitterati society. These two different worlds are depicted in “Saturday Night”, with Flatbush in Brooklyn representing Poverty Row whereas Manhattan is another world altogether, a place for aspirations, with its classy hotels, bars and restaurants, Broadway shows and the lush life.

The hero (or rather anti-hero) of “Saturday Night” is Gene Gorman, a young man who is out to win at all costs. He’s all show and despite his wearing a tuxedo (borrowed) he is basically one of the crowd of drab Brooklynites who surround him. The difference is that he’s a man who is always on the make, constantly looking for ways to improve his lot, even if it means spending money that’s not his, betting at the casino and losing, trying the burgeoning stock market and even pretending to be somebody else, and a millionaire at that. It’s surprising that he has any friends at all and it could be difficult for an audience to feel any sympathy for such a heel, loveable or otherwise. We see him getting deeper and deeper into trouble but he’s the Teflon kid and nothing seems to stick. If the ending seems a little too pat, remember that these events take place about six months before the Wall Street Crash. It’s then that chancers like Gorman will really get their comeuppance.

The Julius brothers based their play on the work of their own brother and his Brooklyn associates in their adventures on the stock market. It certainly has the ring of truth about it, albeit with a touch of the whimsy that imbued a show such as “Guys and Dolls”. These are real characters and the Primavera company brings them to vivid life in a production that oozes pizzazz. Perhaps the space available is too tiny to encompass such larger-than-life antics; indeed, especially since the company is doing a ‘Watermill’ on the show by playing their own musical instruments in what has now become a fashionable thing to do (see also “Sunset Boulevard” on the other side of Haymarket). Confusion tends to set in with actors doubling up and with some playing instruments; but it is a supremely confident staging by director Tom Littler.

David Ricardo-Pearce plays badman Gene with such bravado, you cannot help but warm to him. Helena Blackman plays heiress Helene, the girl Gene meets when they are both crashing a party. The two leads are very good but this is basically an ensemble show in which the real stars are the Sondheim songs that pepper the action and comment on the people and their times. The title song is a wistful number for lonely people who have nowhere to go. “What do you do on a Saturday night, alone?”, they ask. The answer is, without money to spend, you stay in bed and read the newspaper: “But we’re on our own on a Saturday night / With no one to phone on a Saturday night / And when you’re alone on a Saturday night / You might as well be dead.”

In this song and many of the others, it is obvious that Sondheim, even at 23, had already found his own voice in music theatre. ‘Class’ sums up Gene’s ambition to have it all and he truly believes he can buy his way into smart Manhattan society. The Brooklyn Bridge may be his rainbow, his friend with a pot of gold at the other end in Manhattan, but his misfortune was being born on the wrong side of the Bridge in Flatbush. His friends think he should just be himself and not go looking for something he is not. But Gene doesn’t want to be what he is, but rather what he can be, if he tries hard enough. ‘A moment with you’ evokes the great and the good such as Wilbur Wright, Fred Astaire, J. P. Morgan and Sigmund Freud who apparently are as nothing compared to spending time with your loved one. Similarly ‘So many people’ is another offbeat love song for Gene and Helen, while ‘I remember that’ seems like a prototype for Lerner & Loewe’s ‘I remember it well’ (“Gigi”) in which the man recalls a first meeting, only to be told by the girl that it never happened that way at all. Finally, ‘What more do I need?’ is a list song for the two leads as they admit how little they need except each other.

It’s a classy collection of songs to come from the young Sondheim. Even though he may now feel he could improve on them – he still calls them his “baby pictures” and those you cannot change. All in all it’s an enjoyable and touching piece of music-theatre. Young and fresh it may be, but it beats most of today’s blockbuster shows right off the stage and into the pit.