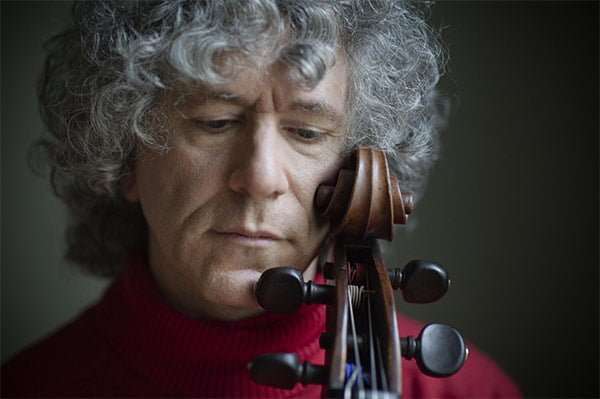 Steven Isserlis continued where he left off. A week ago at Wigmore Hall he played as an encore the ‘Prelude’ from the C-major Cello Suite. Now he played the whole work to kick-start the second leg of his survey of J. S. Bach’s solo-cello music and selections from György Kurtág’s Signs, Games and Messages.

Isserlis was intensely outgoing from the off as he communed with the music. He regards the Suites as “Mystery Sonatas, a telling of the Life of Christ in abstract music.” He could, he says, be “Baching up the wrong tree” (brilliant!). Such wit also informs his playing – joyful, lively, eloquent – the music recreated at the moment while bathed in scholarship if with academic matters left in his dressing room. Imagination and communication are to the fore. What lovely tone he conjured from his cello, rich and clean, his bow and fingers lightning-quick when required, and there’s an allowance of vibrato, too. Dynamic variety was in abundance.

In the C-major Suite, the light touch and springy rhythms for the chirpy dances were a delight, and how poignant was the ‘Sarabande’, but we were bumped back to earth by unhealthy coughs just as the movement was finishing. The concluding ‘Gigue’ came across as triumphant, heroic.

The D-minor Suite is darker, stern if enriching, with things of wonder (‘Allemande’, ‘Sarabande’) and lighter, but not light, relief sandwiched and after. In between these two Suites came a brace of Kurtág pieces (he turned 90 last Friday, the 19th), epigrammatic, economical and on the cusp of inaudibility, silence just as important as sound, and played by Isserlis with ultra-refinement. You were compelled to listen.

Similarly after the interval with two further Kurtág creations – brief in time, big in universe – respectively elfin-scurrying (‘Árnyak’ means Shadows) and then (with the mute on) an ethereal communiqué from another planet. Finally, and indivisibly, it was into the magnificent D-major Suite, Bach’s sextet soon to be completed, and given by Isserlis with depth of utterance (the ‘Prelude’ seemed to be from the earth’s core), equestrian agility, bucolic drones and festivity.

For all that this was the second part of the journey, it was a complete and exhilarating evening on its own terms – a privilege and a pleasure to have been present in the company of a musician who has such a personal and probing way with this timeless music. And we weren’t done, for Isserlis wished to remember Pablo Casals, synonymous with Bach’s Cello Suites, just as he is closely associated with ‘The Song of the Birds’, a Catalonian folksong at once atmospheric and soulful in this arrangement. This flight of fancy on Isserlis’s part, it proved the perfect encore and added wings to a celebrated concert. On leaving the platform for the final time, Isserlis ensured that his cello also took a bow.