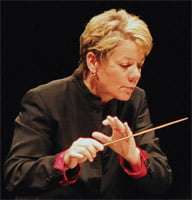 Some lovers of British music still regard Vaughan Williams’s Tallis Fantasia of 1910 as virtually non-exportable – as the testing ground of a foreign conductor’s appreciation of Britishness. That said, the piece is not easy to bring off. This meditation on Tallis’s hymn was written for string ‘choirs’ (string quartet and two orchestras of different sizes) in a melding of influences ranging from the hymn’s original Phrygian mode to impressionist influence from Ravel. Success in performing this piece is usually deemed to comprise a rich mulch of string-sound, eventually lightened when a solo violin utters birdsong, presaging The Lark Ascending of 1914.

Alsop took the bull by the horns, giving us both less and more than we are used to. With great care and attention, she isolated and separated the different sections of the work, discriminating firmly between the different string ‘choirs’. Without sacrificing richness of tone, she oversaw the most well-defined performance of this score imaginable, purposeful in movement. The loss lay in diminished bloom – in part, maybe, also attributable to precise acoustics in the refurbished Royal Festival Hall. 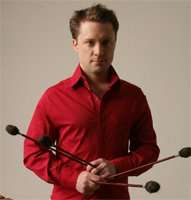 Colin Currie has inaugurated works by Thea Musgrave, Joe Duddell, Dave Maric and Steven Mackey amongst others. Jennifer Higdon wrote her Percussion Concerto for Currie. She is a busy composer – highly successful and popular. One can see why. Her work is lively and exuberant, colourful and eclectic.

The work resembles a collage arranged on a scroll. What is to come is temporarily hidden, giving an element of surprise. Unrolling the scroll reveals a multitude of items of differing musical hues – jazz, folk, Debussy, Copland, open prairie, rock, Bartók and brassy fanfares. A vast range of percussion instruments is employed. The music is engaging, accessible and busy. It arrives in short bursts, does not make tough demands on the concentration, but catches the attention vigorously.

Colin Currie was astounding. Darting from one bank of percussion equipment to another he played solo and with the orchestra’s two timpanists and four percussionists and with the whole orchestra, His extended cadenza was a tour de force leading into a riotous finale that brought the house down. Jennifer Higdon was present.

Alsop’s account of The Rite of Spring was engrossing and exemplary – the best since Boulez and the LSO a few years ago. The piece sounded like a classic. About time too! It’s nearly 100 years since that unruly, riotous reception in Paris. Alsop and the LPO made no apologies for the work’s modernism (they did not need to) or over-played its capacity to shock.

The keynote of the performance was its virile steadiness. The Rite is a work of violent, shifting rhythms. Yet, here, each shift had definition – and sat firmly in place as soon as it appeared. The colours and the timbres of the vast range of instruments that Stravinsky employs became solidly present, on appearance. The woodwind flurries following the opening bassoon solo wriggled deliciously like a collection of snakes. The steady springiness of the strings’ motifs in Part 2 had a light, purposeful relentlessness leading us ever onwards, towards the concluding Sacrificial Dance. I sensed the orchestra’s delight and enjoyment in making these sounds – including the violent ones.