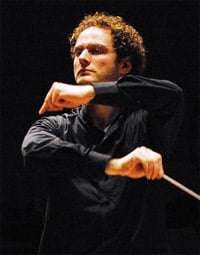 This one-off performance of Eugene Onegin was a version of the Grange Park Rising Stars staging, first seen at Nevill Holt this summer, which returns to the main Grange Park festival next year. There were no sets, just a few chairs and other props, costumes placing it around the time of its first performance in Moscow in 1879, and with an imaginative use of the gallery above the Cadogan Hall stage. No conceptual complications there, then. The 30-strong orchestra was ranged side-on at the back of the stage, with Toby Purser conducting almost from the wings.

Director Stephen Medcalf used the youthful singers to good effect – the Pushkin story places Onegin, the eldest of the four main characters, in his early twenties – and you got the gist of young people being accelerated rather too rapidly into adulthood. James McOran-Campbell was most successful in this respect in the title-role, a clever blend of control, reserve and fastidiousness that didn’t curdle into mere superciliousness. Discreetly personable, he looked the part as well, no longer a boy, not quite grown up, and then, having killed his friend, an emotional husk. He sang and acted fluently, and the character came sharply to life, with his implosion at the end strongly delivered. A bit more colour and shade to his otherwise attractive baritone wouldn’t have gone amiss, but no doubt that will come.

The tenor Anthony Flaum nailed Lensky’s poetic ardour and impetuousness brilliantly, a ‘down-boy’ romantic in his first aria and drunkenly out of control at the party. Sometimes he pushed his voice too hard and his vibrato got the better of him, with ensuing pitch problems, but he pressed all the right emotional buttons in his gripping pre-duel aria. How these boys suffered.

Ilona Domnich didn’t inhabit the role of Tatyana to the same degree. She sang very well, with an impressive control and vocal variety at odds with some unresponsive acting. The ‘Letter Scene’ didn’t exactly seethe with hormones and huge but unfocussed desire, and there were moments of wayward detachment from the orchestra. She convinced, though, as a princess, and her emotional turmoil finally caught fire in the last scene.

Olga (for once with dark hair; Tatyana was the not-so-ditzy blonde) made her mark with winning confidence as performed by Caryl Hughes, who placed Olga’s flirtatious foibles with precision and who also has a usefully sexy lower register. The well-directed Triquet and Gremin cameos were neatly folded into the drama and sung with great presence by respectively Nicolas Darminin and Matthew Stiff; there was incisive singing and maternal hand-wringing from Alexia Mankovskaya as Madame Larina.

Directorially, there were some telling gestures and one, perhaps two, ‘bonkers’ ones. Lensky, pissed out of his wits at the party, finishing off Monsieur Triquet’s song made its point, and the sight of Lensky and Onegin rolling the barrels of their pistols against their sleeves to play Russian roulette against each other was chilling. Less certain were Filipyevna muttering senilely to herself before the ‘Letter Scene’ and Gremin stomping on with a pistol to see to Onegin right at the end. Particularly entertaining, though, was the surreal, disembodied hand (attached to the rest of the assistant stage manager hidden inside a desk) writing Tatyana’s fateful letter, recalling ‘Thing’ in The Addams Family – I wonder whether that insight will make it to Grange Park next summer.

The chorus direction was slick, and the dancing, considering the limitations of the stage, very effective. Toby Purser’s excellent conducting and the overall balance he achieved made you realise how much of the detail of Pushkin’s atmosphere, character and story is conveyed by Tchaikovsky’s music.