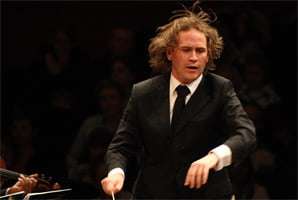 As their older cousins, the members of the Simón Bolívar Youth Orchestra, also do, the youngsters of the Teresa Carreño Youth Orchestra like to turn a concert into a carnival. Nothing wrong with letting your hair down – yet so soon after playing a great symphony is perhaps dubious – but the formula for doing so is now beyond its sell-by date and needs a change of script. On this occasion, the third and last encore, a full-on ‘Mambo’ from “West Side Story”, found the music virtually obliterated by the audience’s clapping-along and the orchestral musicians doing similarly as well as throwing themselves around while performing; that they managed to play with such energy and unanimity (when they could be heard) is another matter, but Lenny deserves better. Ginastera, too, the final dance from his Estancia ballet-score similarly gangbanged. Tico, Tico just about survived, and would have been more than sufficient to round the evening off. Yet, these three pieces were the same additions that were played in the Royal Festival Hall just two nights earlier, meagre planning on the ‘extras’ front, and further proof that a breaking of the mould is required.

The concert proper, the second Shell Classic International programme of the new season, warrants a critical examination given the interest that El Sistema generates and which catapults those students that benefit from it to world-wide attention and comparison, and not forgetting the hysterical reception that greets any one performance let alone gig; furthermore, these London appearances of the Teresa Carreño Youth Orchestra attracted ticket-prices up to £70.00 (akin to concerts by the Berlin and Vienna Philharmonics). Certainly there’s no doubting that these young musicians (elegantly and formally attired before changing to their encore-garb of national-flag jackets of red, yellow and blue, stars added, “Venezuela” picked out in big letters, and no doubt sported with pride) are precociously talented and are devotedly trained as part of ‘the system’. 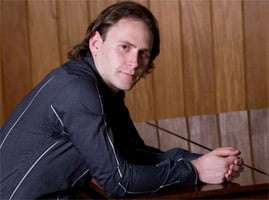 The TCYO’s music director is Christian Vásquez, a confident and impressive young man who might though need to loosen up his conducting technique given the lack of swing in the Copland and Chávez pieces and the over-emphatic aspects of the Tchaikovsky. Following a seismic and cacophonous ‘jam session’ before officially preparing, the evening opened with a helter-skelter account of Leonard Bernstein’s brilliantly effervescent and comedic ‘Overture’ to “Candide”, taken fully-up to the composer’s own fast-forward tempo; if, despite the TCYO’s rigorous tuning process, woodwinds were somewhat out of kilter with the violins, the performance was always articulate, with something saved for the race to the finishing post.

It was interesting to have the contemporaneous El salón México and Sinfonia India juxtaposed, for the composer of the latter, Carlos Chávez, conducted the premiere of the former, appropriately enough in Mexico City. Intriguingly Sir Adrian Boult led the US first performance (with the NBC Symphony Orchestra in New York) the following year, 1938 – stiff upper lip meets Mexican fiesta, possibly! There was certainly inflexibility to this TCYO account, for all or because of the well-drilled preparation, wit and swagger in short supply. Having absorbed Mexico City’s allure first-hand, Copland was as much a native as Chávez, the latter’s Sinfonia India not dissimilarly kaleidoscopic, folksy and soulful (his other five symphonies being rather more ‘classical’), but Vasquez drove the outer sections to a pile-driving blur if finding atmosphere and spirit elsewhere.

For all the outsize proportions of the TCYO – not least 93 string-players (22 First Violins down to 13 double basses), and extensions of woodwind and brass personnel – it was rare that decibels became unacceptable; balance was also well-judged, brass rarely intruding – a notable achievement.

The depth of sound afforded by this number of strings paid many dividends in the Tchaikovsky, rousing in climaxes yet capable of intimacy, too. There was also a superb horn solo (presumably from Kervin Guarapana) that was a model of poise and sotto voce smoothness, hauntingly introduced by veiled lower strings (otherwise terrifically trenchant), to open the slow movement, at the close of which Vasquez overly contrived a long silence, which although raptly attended to by the audience was then ruined by those who missed the point and clapped. Otherwise, Vasquez went for extremes (including some jarring tempo changes in the first movement), from a subdued and gloomy opening, which overly brooded, to an immolating finale that, for all its transfiguration in terms of cathartic power, wasn’t as instinctive enough in finding Tchaikovsky’s particular brand of liberation; but, on its own terms – adolescently unbridled while sympathetically devoted – this was pretty amazing.