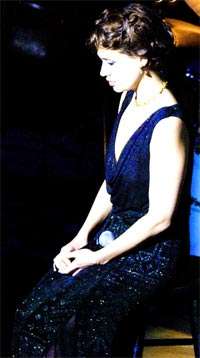 In the past couple of years American singer Maude Maggart has entranced Londoners with her solo cabaret programme of songs by Irving Berlin and a show called “Good Girl/Bad Girl”, a mixed bag of numbers about ladies on their best and worst behaviour. For her show at Pizza on the Park, the last in the current series of the indispensable American Songbook in London, Maggart sings and talks about dreams. The title of the show comes from a Joan Baez song and it proves to be one of the most touching moments of the evening, sung in tandem with Judy Collins’s ‘My Father’. The show presents an eclectic collection of songs.

Beginning with Johnny Mercer’s ‘Dream (When You’re Feelin’ Blue)’ Maude’s opening selection includes ‘Here Come the Dreams’ by Hugh Martin and Marshall Barer, ‘In the Heart of the Dark’ by Jerome Kern and Oscar Hammerstein II and Rodgers & Hart’s ‘Isn’t It Romantic’, all slow, dream-like numbers which Maude performs as if singing in a slow-motion reverie. Rarely does the lady sing with bold gestures, preferring a low-key performance, slow and quiet as if in a dream (anything more violent would become a nightmare).

Talking between numbers she explains why children need lullabies to go to sleep and enter Dreamland. She cites Walt Disney as a great purveyor of dreams in such numbers as ‘When You Wish Upon a Star’ from “Pinocchio” and ‘A Dream is a Wish Your Heart Makes’ from “Cinderella”. Maude sings the latter in conjunction with another Cinderella story, ‘On the Steps of the Palace’ from Stephen Sondheim’s “Into the Woods”, in which Cinders is stuck fast, providing an obvious good girl/bad girl contrast.

Songwriter Marshall Barer was a friend of Maude Maggart’s theatrical family – parents both actors, grandmother a dancer in the corps de ballet of “George White’s Scandals” in the 1920s – so she was subjected to his rather odd songs from an early age. Apart from ‘Here Come the Dreams’ she also sings his curious lyrics to a melody by Antonio Carlos Jobim. It’s called ‘Lost in Wonderland’ and takes the Alice story and sets it to a bossa nova tune. Barer was a strange being who said what he was thinking, which often got him into trouble. He wrote in a room comprised entirely of mirror-glass.

Perhaps the most affecting dream-song comes from Yip Harburg who will be forever associated with the lyrics of ‘Over the Rainbow’ which he wrote with Harold Arlen for the film “The Wizard of Oz” (it was, amazingly, the song that nearly got cut by the MGM studio bosses). Its popularity comes from its being introduced by Judy Garland. Maude sings it in as affecting a way as Garland did, bringing out all the emotional power of both the music and the lyrics in what is but a simple song about a little girl and her dream. The other Harburg rainbow lyric is ‘Look to the Rainbow’ from “Finian’s Rainbow”, which he wrote with composer Burton Lane. Harburg was a real poet when it came to writing lyrics and yet they are rarely pretentious. The simplicity of “Look, look, look to the rainbow / Follow the fellow / Who follows a dream” couldn’t be more apt as a metaphor for the good life.

Why are there so many songs about rainbows and dreams? Well, we all love seeing a rainbow because it has a kind of magic to it. But, like most things, after you grow up there don’t seem to be as many rainbows as there were in childhood. Everybody loves to dream because it’s therapeutic and refreshing – it’s what going to sleep is all about.

Maude Maggart ends her show on an upbeat note with Kermit the Frog’s song from “The Muppet Show”, Paul Williams and Kenneth Ascher’s ‘Rainbow Connection’ (“for lovers, dreamers and me”) and, as an encore, we were given Gus Kahn’s delightful lyrics for his ‘Dream a Little Dream of Me’. Dating from the early 1930s it has remained perennially popular, although ‘Mama’ Cass Elliot had the biggest hit in 1968. What sentiments could be better than: “Sweet dreams till sunbeams find you / Sweet dreams that leave all worries behind you / But in your dreams whatever they be / Dream a little dream of me.”

Maude Maggart delivers all these charming words with a natural grace in which she takes her time in a performance that is reserved and tentative but which also reaches out to her audience in the most giving way. With her highly talented and sympathetic accompanist, John Boswell, she is a natural for American Songbook material and together they bring a classic series to a memorable and mesmerising finale. It is to be hoped that there will be another season of The American Songbook in London.