The Black and White Ball, a musical mystery 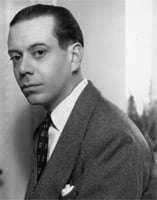 A new Cole Porter musical? Surely not. It’s neither new nor old. It’s a play, a murder mystery, illustrated with twenty or so classic Porter numbers interpolated into the plot to perhaps illustrate something. Quite what that something is, though, is hard to fathom.

The play is set in New York City and Connecticut in the 1940s and the 1960s. Leah, a writer, has come to New York some twenty years after her stepfather, Johnny, was murdered at the Black and White Ball. Johnny too was a writer with the pen-name of Jay St John. Leah conjures up the ghost of her dead stepfather in order to solve the murder mystery and to try to disprove the suspicion that her own mother, Suzanne, had killed him.

Without the songs it’s a plot that would probably make a one-act play. Johnny gets writer’s-block and starts to collaborate with Ron, someone who is no writer but who has plenty of ideas. They meet by chance in a ‘gay bar’ where Ron does a drag-act as Lottie. On a strictly professional level their relationship seems to work well and there the story ends. However, there are complications over the manuscript that Johnny was working on. It’s locked away somewhere in a Tiffany box for which there is only one key. In his spirit form Johnny leads Leah to discover the secret of the locked box and ultimately the identity of the murderer.

Warner Brown’s neat little play works well in the restricted confines of the King’s Head Theatre which, in its newly refurbished state, is looking exceedingly handsome – new bench-seats, no tables, a space for the band and for the lighting and sound-decks. However, much as the musical numbers are well performed, they intrude upon the plot do not take the story further. It’s as though two shows, a thriller and a cabaret, had been thrown together – rather like Richard Strauss’s “Ariadne auf Naxos”.

That said, one shouldn’t carp at the opportunity of hearing songs such as ‘What is this thing called love?’, ‘All of you’, ‘After you, who?’, ‘You’ve got that thing’, ‘I concentrate on you’ and ‘Do I love you?’ – for they are exceedingly well performed and the small band is excellent creating the perfect atmosphere in Larry Blank’s skilled arrangements.

The cast of six adults and a little girl (as young Leah) do wonders in doubling up on roles. Chris Ellis-Stanton gives a smooth account of the possibly-schizophrenic writer Johnny, Katherine Kingsley as his boss and eventual wife Suzanne remains an enigmatic figure (did she do it or did she not?) and Kaisa Hammarlund as the older Leah holds the plot together in her search for the truth. Bethany Lloyd-Perks as little Leah shows promise. Particularly good are the company numbers such as ‘Ridin’ high’ and ‘Please don’t make me good’. Mark McGee’s ‘Lottie’, the drag queen, goes above and beyond the call of duty in his performance of ‘Give him the oo-la-la’ and is later joined by Charles Shirvell and Liza Pulman for a very spirited version of ‘Can-can’ which has some of Cole Porter’s funniest rhymes.

There probably wouldn’t be enough of a show without Cole’s songs, and they raise the entertainment level, but it’s still an admixture that makes an odd mixture. However, it’s good to see the King’s Head Theatre back in action and looking so svelte. The line-up of shows to the end of the year includes more musicals, Ian McFarlane’s “Betwixt!”, Brett Kahr’s “Street Magic” and Vivian Ellis’s “Godiva”, as well as new plays, and “Shadowmaster”, an adaptation from J. M. Barrie. Things are looking up and London has a newly-revived space that is eminently made for cabaret.