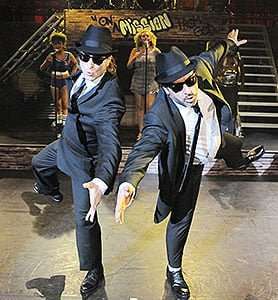 Concurrent with Pope Benedict’s resignation it seemed peculiarly appropriate to be watching a musical tribute described by the Vatican as a “Catholic Classic”. Jake and Elwood Blues (alter-egos of John Belushi and Dan Aykroyd), without writing a single bar of music, created a genre that has spawned thousands of tribute bands – a tribute to a tribute.

Aykroyd’s love-affair with the blues started in his home city of Ottawa where regular visits to a club called Le Hibou introduced him to artists such as Muddy Waters and Howlin’ Wolf. Belushi, a fan of heavy rock, became fascinated with the blues after Aykroyd introduced him to it. With the encouragement of Saturday Night Live music director (and original Blue Brothers pianist) Paul Shaffer the Blues Brothers act was born.

In 1980, four years after the first appearance on SNL the first Blues Brothers film was released. The story line is a tale of redemption as the siblings take on a mission from God to save the Catholic orphanage (in which they grew up) from closure for not paying taxes. Along the way they run into a Country-and-Western band and a group of neo-Nazis who are intent on the duo’s destruction. They also have the Illinois State Police in pursuit of Elwood for driving without a licence. Car-chases and set-pieces ensue until finally the pair rush into the office of the Cook County Assessor to pay the bill; followed immediately by their arrest. Eighteen years later, in 1998, the sequel, Blues Brothers 2000, followed a similar storyline only without Belushi who had died of a drugs overdose in 1982.

The musical takes as its basis the SNL show. References to both films are present (the protective screen in the ‘Rawhide/Stand by your man’ sequence was lost without the rednecks throwing bottles). However this is a stage-show without the trappings of a plot to restrain the performance and anyone who has not seen the films will not be at a disadvantage. 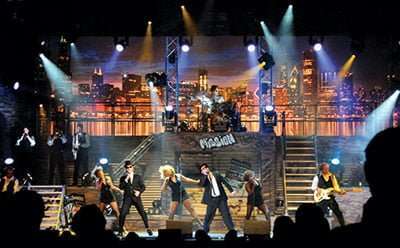 This current presentation takes almost every song from the first film (‘The Old Landmark’ and ‘She Caught the Katy’ are omitted) together with Otis Redding’s ‘Respect’ (from the second movie) here given authentic Aretha Franklin punch by Jenny Fitzpatrick – one of the three female backing singers called ‘Blusettes’. The other two are equally impressive – Jenessa Qua in ‘Shake a tail feather’ and Alexus Ruth who urged the sadly small audience to ‘Think’. The remainder of the show mixes of blues, soul, and rock ‘n’ roll. There are some stunning arrangements with Kenny Young and Arthur Resnick’s ‘Under the boardwalk’ standing out.

The two leads, Brad Henshaw and Chris Chandler are convincing as Belushi and Aykroyd respectively though Henshaw’s constant cartwheels, impressive the first couple of times, eventually lost their appeal. The two have similar body shapes to the original duo with voices to match. Chandler is a commendable ‘harp player’ (the name used by Blues and Country musicians for the harmonica) and Henshaw, who is also the director and co-producer, enthusiastically performs out of his skin. William Hazell portrayed a variety of parts, including Reverend Cleophus James (here called Levi) and Curtis. His first impression was let down by a muffled microphone in ‘Higher and Higher’ although a surreal George Melly-like ‘Minnie the Moocher’, a shock at first compared to the Cab Calloway original, grew on me and upon reflection would reward a second look at.

As with the original Blues Brothers musicians, the band was excellent, playing-well together despite being scattered about the stage. One criticism would be that one trumpet and one tenor saxophone is really not enough, certainly in songs such as ‘Land of a thousand dances’ (made famous by Wilson Pickett). The suffix “Approved” is because its producers and director were careful to garner the support of Aykroyd, and Belushi’s widow Judy. Legal action by the copyright holders against the many groups worldwide that have for years played in tribute to Jake and Elwood tainted this musical in the US. However the music is infectious and the performers are exceptional; so ‘Shake a tail feather’ and get ready to party!