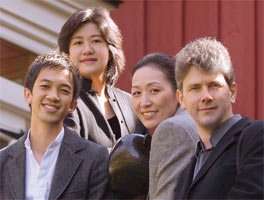 Much critical praise has been given to the recently renovated Alice Tully Hall in Lincoln Center. However, the first thought that comes to mind when entering the lobby with its large glass windows facing Broadway is that Manhattan has finally received its very own airport terminal. This impression is validated by the rude cop attempting to push people behind rope barriers at the box-office queue, the sorry-looking overpriced sandwiches served to hapless customers in the overcrowded lobby cafe, which barely had the counter space to rest a wine glass, never mind the tacky plastic food-trays, and the bag search by police at the auditorium’s entrance. New York City concertgoers have become accustomed to opening their bags to be inspected before entering concert halls in these post ‘9/11’ years, but the Alice Tully police’s overly rigorous search for contraband cameras seemed like overkill.

The newly designed interior of the hall seemed impressive enough, with dark wood and a large stage. However, the lighting designer might have chosen not to display a horizontal red ‘landing strip’ light on the wall prior to the start of the concert, thus reminding one of the transportation-themed lobby.

Fortunately, the audience was there for an auditory rather than visual experience. The purpose of this concert, the first of three in Chamber Music Society of Lincoln Center’s “Schubert Ascending” series, was to showcase works composed in the final year of Schubert’s tragically short life, which ended in 1828 with his death by syphilis at the age of 31. The overriding question implicitly imposed by the series is “What if…?”. Schubert’s finest music, such as the glorious ‘Death and the Maiden’ string quartet and his String Quintet, was written in the final two years of his life, and this music leaves the listener pining for the works that might have been, had he lived longer. Schubert was unwell at the time of writing this concert’s pieces, and perhaps the knowledge of his impending demise fueled the creation of these passionate masterpieces. 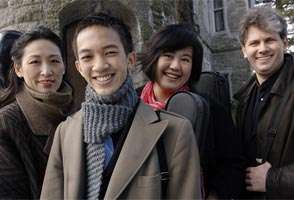 The evening began with an exquisite performance by the young Israeli-born pianist Inon Barnatan of the Piano Sonata in C minor. Schubert had been Beethoven’s pallbearer, and his idolization of the great master was apparent in the Sonata’s opening bars, reminiscent of Beethoven’s ‘Pathétique’ Sonata (in the same key). Barnatan played the opening crashing chords with appropriate drama without ever approaching melodramatic territory. The second movement was the highlight of the concert. Barnatan’s pianissimos showcased the hall’s wonderful acoustics, and he played with breathtaking nuance and subtly shaded phrasing, making the movement’s final harmonic progression of I/IV/I/V/I seem like the most original cadence ever composed. The Sonata’s brief Menuetto was lively and suspenseful and the finale’s galloping phrases showcased Barnatan’s virtuosity. 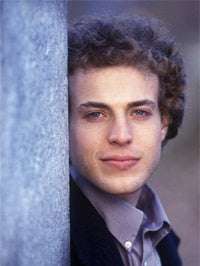 Barnatan was then joined by Orion Weiss to perform the Fantasie in F minor for piano/four Hands. Schubert was fond of this convivial configuration, and he wrote many such works. The Fantasie has a theme that appears in the first and last of the work’s four sections that is so catchy that it was overheard being hummed repeatedly in the restroom line at intermission. The keyboard, what with two pianists and a page turner seated side by side, seemed as crowded as an airplane’s economy section, and one got the feeling that the performers would have been more comfortable if they were given their own instruments. Weiss, confined to the treble end of the keyboard, did not have control of the pedal, which might excuse his less finely nuanced phrasing. His sound, at times, seemed shrill, but his ensemble playing with Barnatan was first-rate, particularly notable for precisely matched chordal attacks.

The set-up for the String Quintet was unusual in that three of the performers read their parts from laptops. As if influenced by the machines, the Borromeo Quartet, joined by cellist Nicolas Altstaedt, gave a polished yet emotionally sterile performance. The performers arranged themselves with the violins facing each other and with Alsteadt, on second cello, in the middle. This arrangement, while possibly historically accurate, is uncommon for chamber groups in recent times and created a distasteful acoustical balance. When the first cellist and violist, separated by the second cellist seated between them, played the first movement’s initial theme in close harmony, similarly followed by the antiphonal violinists, the effect was that of an unwanted stereo sound as opposed to the expected blend of tone.

The performers’ tone was more finely blended in the Quintet’s haunting second movement, yet the sameness of first violinist Nicholas Kitchen’s vibrato and bow positioning made the music seem surprisingly bland. Only Altstaedt dared to make a sound that was less than beautiful at times, with occasional brusque bowed attacks varying the richness of his tone, and he stole the show. The scherzo displayed the performers at their finest, when their rock-steady tempos became an asset, not a hindrance, as it had been in the previous movement; the briskness highlighted the Borromeo players’ first-rate technical skills, and the energy of the performance at last validated the musicians’ prestigious reputation. Unfortunately, the final returned to initial blandness, with only the coda’s race to the end, propelled by the scrubbing second cellist, redeeming the rendition.