Bartók
Duke Bluebeard’s Castle – Opera in one act to a libretto by Béla Balázs [sung in an English translation by John Lloyd Davies, with English surtitles]
Stravinsky
The Rite of Spring – Ballet in Two Parts 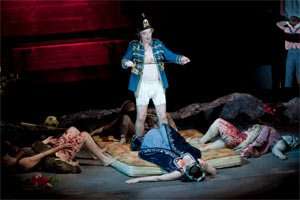 Daniel Kramer’s take on Bartók’s dense and atmospheric opera “Duke Bluebeard’s Castle” for English National Opera may not be to everyone’s taste, and certainly at the end of this first-night performance there were (inevitably) a few sporadic boos and even shouts of “Rubbish!”. This is harsh. (A man sitting behind me thought the production was “stunning” – Ed.) The staging has some very fine ideas, at times some arresting visual images, but ultimately it’s a little busy and does not always match the composer’s brooding, unsettling score.

Perhaps drawing its inspiration from the recent solving of age-old disappearance mysteries that have recently occurred in Austria and the USA the silent opening reveals an ordinary front door lit by a solitary streetlamp. What goes on behind any front-door can be a venture into the unknown. Bluebeard walks, in a somewhat stilted fashion, towards it followed soon after by Judith. The music starts. It is made distinctly ambivalent as who is leading whom initially, and once they have both entered then comes the most arresting image of the production. Behind the walls one sees Bluebeard walking down a seemingly endless corridor with Judith following him. Then he stops and she overtakes and leads him on further through the darkness. In terms of staging this section is inspired. However, once they reach the main hall of the “castle” with the ‘seven doors’, things do not progress quite so smoothly. 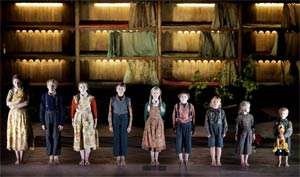 Bluebeard’s treatment of Judith after the opening of the First Door is surely too rough to then allow both her and our gradual realisation of the secrets of Bluebeard and his home to unfold with the music. The major miscalculation is at Door 5 when the back walls disappear to reveal his family, offspring of the former wives, all alive and trapped within. They are occasionally seen to perhaps warn Judith, but remain under Bluebeard’s control. At one point all are made to line up as if playing the parts of the children in a production of “The Sound of Music”. Family von Trapped?!

That thought made it rather hard to take the production seriously from then on. Unfortunately the continued presence of these children and adolescents tended to dispel any tension that was being generated from the pit, from where Edward Gardner and the ENO Orchestra were delivering a taut and coloured account of the score – with the woodwind principals making a particularly fine impression in their various solos, and the strings capturing a warmth but with an edgy undertone.

As Bluebeard’s polygamous household was revealed and Judith prepared for non-consensual marital sex (rape) there were clichés a plenty, not least in the idea of a sword being brandished. Clive Bayley was required to portray Bluebeard as something of a neurotic with tics, and a tendency to alcoholism. This undermined the grandeur of some of his solos, not least his final oration. Bayley was perhaps not in his most fluid voice, but he certainly has the gravelly bass tone needed. However, as always with Bayley you could hear and understand every word he sang. Michaela Marten’s diction was not nearly as good, but she sounded mettlesome as a good Judith should, and her phrasing was fine. Perhaps vocally and dramatically the vulnerable side of the character was muted, but the production gives her little scope for credible character development. Overall the production overloads the work and left the narrative devoid of a vital component – mystique. 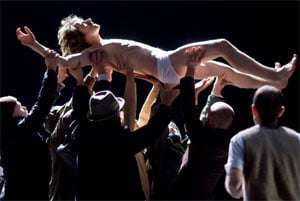 The second half of this double-bill was rather more effective. Edward Gardner and his orchestra gave a spirited account of The Rite of Spring, suitably rough around the edges and full of colour. It is good to hear this work played, as intended, from a theatre pit once in a while rather than spot-lit on a concert-hall platform. The more so when the staging is as compelling and vital as Michael Keegan-Dolan’s, his choreography varied, at times amusing, at times unsettling and with the sense of latent violence in the community vividly projected. Particularly clever was the real sense of uncertainty as to the identity of the sacrificial victim. The presence of a small child or a helpless old man had one rather concerned at moments, and the enigmatic ‘woman’ who seemed to be controlling the ritual had a disconcerting presence. The gradual change of costuming of the main corps of dancers was also clever – transformed from men clothed in ordinary attire, to being naked and then dressed in floral dresses was well managed. Their dancing, was alert and exciting.

This performance also generated boos, but the overall response was extremely enthusiastic. I’m intending to see it again and soon!