For the Cleveland Orchestra’s second and concluding program of its annual Miami residency, Music Director Franz Welser-Möst led a rich and brilliant performance of Mahler’s Fifth Symphony that justified devoting the concert to a single work. Mahler divided its five movements into three Parts, with pairs of related movements forming Parts I and III, and the Scherzo – the longest single movement – standing alone as Part II. Welser-Möst’s reading clearly observed the Symphony’s trajectory arc, beginning in funereal darkness and ending with expressions of love and joy. 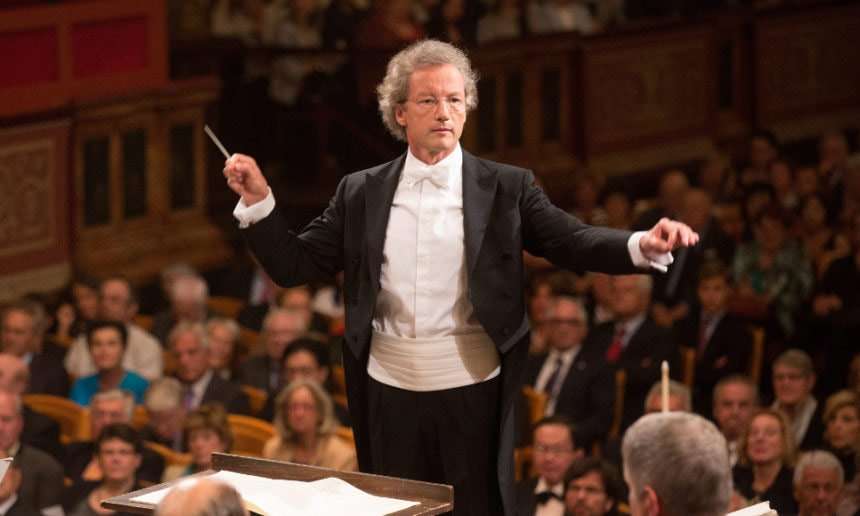 The opening movement, a funeral march, began superbly with Michael Sachs’s solid and glorious trumpet fanfare, leading into the strings’ rich intonation of the march theme, taken at a measured pace that neither sped nor dragged. The threnody is interrupted by a violent outburst, heralded by Sachs’s wailing instrument and anchored by bass lines powerfully voiced by low brass and double basses, that foreshadowed the stormy second movement. When the calmer mood resumed, the funeral march continued to undergo development that included subtle variations as well as polyphony that reflected Mahler’s recent study of the music of J.S. Bach. Finally, over sustained string tremolos, the trumpet’s reprise of its opening call was echoed by Joshua Smith’s flute just before the concluding pizzicato chord.

After a pause, albeit a very short one, Welser-Möst plunged into the second movement, with vigor appropriate to its marking – Stürmisch bewegt, mit grösster Vehemenz (Moving stormily, with greatest vehemence). He brought out the movement’s linkage to its predecessor, building on the prior movement’s violent interlude, and alluding to its funeral march as well. The cellos soliloquized gloriously, and there were fine contributions from Afendi Yusuf on clarinet as well as orchestral colors from percussion and trumpet. At one point, Welser-Möst almost dove off the podium to draw expressive playing from the violins. A movingly played brass chorale shifted the tonality to the D-major that persists into the Scherzo, the Symphony’s second part.

The Clevelanders ably captured the Scherzo’s rustic charm and catchy dance rhythms. Its lengthy and difficult horn obbligato was brilliantly played by Nathaniel Silberschlag, who stood at the front of the orchestra, which proved something of a distraction. Bach’s influence could again be heard in the movement’s fugal passages for the strings, which also contributed fascinating pizzicato playing. The sound of five horns brought effective impact to the coda.

Part III begins with the famous Adagietto, the diminutive ending of that marking reflecting the movement’s relative brevity, not a deviation from its Adagio tempo. Harpist Trina Struble was outstanding as she joined the strings in the beginning and closing sections of the movement, her arpeggios, ingeniously placed by Mahler, serving both to harmonize and provide the music’s pulse. Welser-Möst’s pacing and phrasing made the theme come through as tender, consistent with Mahler’s intent to create a billet-doux to Alma Schindler, whom he met and married during the time he was composing this work – not as a return to the funereal mood of the opening two movements.

The Rondo-Finale, launched by the solo horn, is happy and optimistic in mood from the outset. The cheerful rondo theme, introduced by John Clouser’s bassoon, quotes the Wunderhorn song ‘Lob des hohen Verstandes’ (Praise of high intellect), and ends with what could be the bray of that song’s donkey-judge. The Finale was a delight throughout, with the strings again excelling in fugal passages and the winds making fine contributions. The reprise of the second movement’s brass chorale was even more stirring this time around, with a triangle providing a gleaming touch, and the brass and horns ended the Symphony with an explosive, joyous whoop!