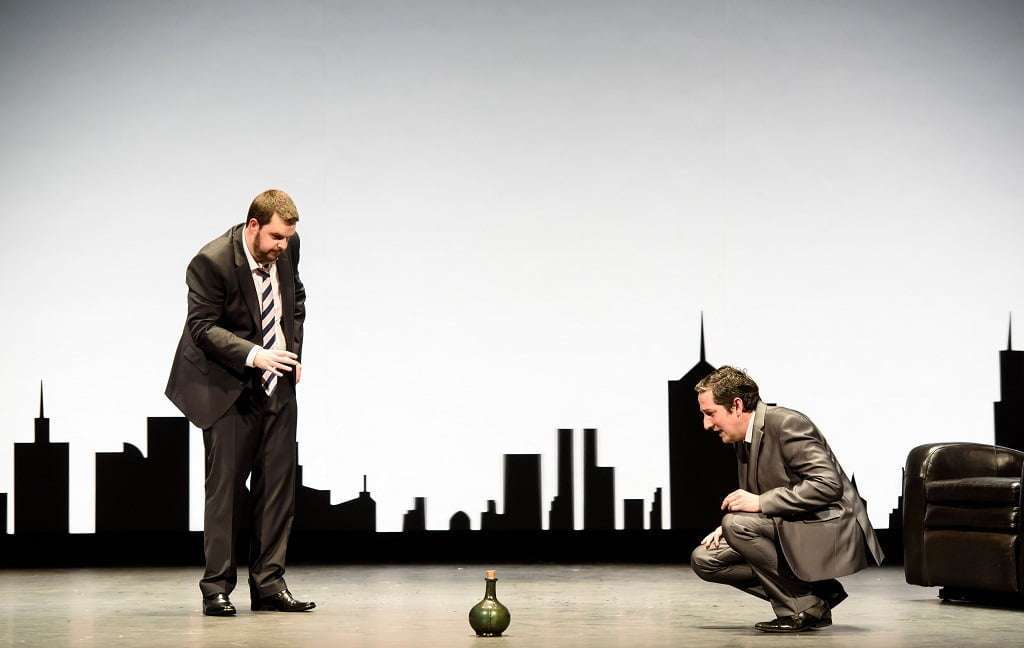 The Devil Inside celebrates the rude health of opera. Gripping and convincing from the first spiky notes it tells the timeless story of a Faustian pact between an evil spirit trapped in a bottle and two naïve young men, based on Robert Louis Stevenson’s The Bottle Imp. The narrative provides a fantastic theatrical vehicle for a small group of performers: four singers and fourteen instrumentalists.

The production is economically designed by Samal Blak, restrained and ascetic like the music, changes in time and continent indicated with silhouettes and lighting James and Richard are lured into morally dubious territory by the Imp’s ability to grant their every wish. There are restrictions to the use of these magic powers, however, the owner of the bottle must not die in possession of it and can only sell it on at an ever-diminishing price. Tortured by yet addicted to the power and wealth the Imp confers, the men struggle to use the power for good and ultimately try to break free from its malign influence. The unexpected denouement, which departs from Stevenson’s story, adds a power and ambiguity to the drama of a surprisingly intimate kind. 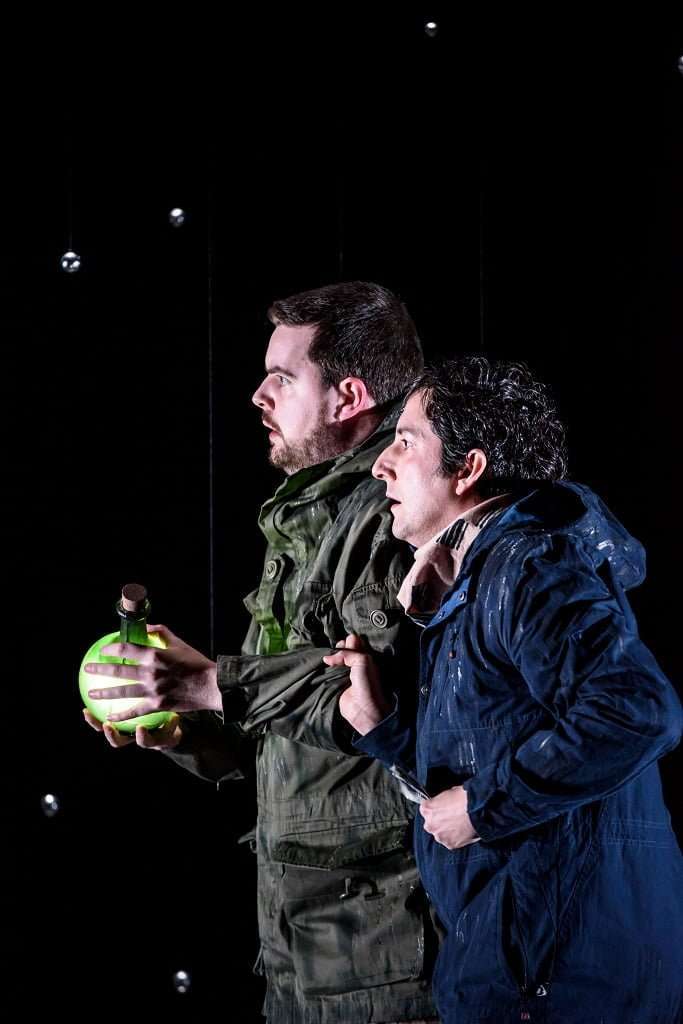 The Devil Inside is Stuart MacRae and Louise Walsh’s third collaboration, the last was the award-winning Ghost Patrol (2012), also a co-production between Scottish Opera and Music Theatre Wales. MacRae’s imaginative use of harp and plucked strings in the opening scene, with eerie percussion and harmonica to characterise the Imp, and haunting woodwinds against abrasive underscoring hints at a compositional lineage that embraces Michael Tippett and Benjamin Britten’s The Rape of Lucretia. Welsh’s libretto is more expansive, almost every-day in its language, but is nevertheless succinctly persuasive.

Michael Rafferty did an outstanding job in the pit, especially when the lights went out and the ensemble and singers had to re-start the second scene when it had been going five minutes. The bright and energetic dissonance of the score is balanced with flexible vocal lines and layered conversational harmonies.

Each of the soloists was completely inside the music and tale, and sang with such clarity that the surtitles bordered on the superfluous. Ben McAteer was an engaging James and Rachel Kelly sang the role of his wife Catherine with passionate conviction. They were allowed emotional engagement with each other and therefore the audience: their plight of illness and childlessness and the choice of devilish intervention was a resonant one. Can good be done by evil means? There are no answers in this thought-provoking staging.

Having started in Scotland and come to London, The Devil Inside tours now to Cardiff, Basingstoke, Manchester, Aberystwyth, Huddersfield, Mold, Birmingham and Toronto.